Chargers Training Camp: Who Are These RBs?

Share All sharing options for: Chargers Training Camp: Who Are These RBs?

Almost a month ago, my curiosity and uncertainty about the WR depth on the San Diego Chargers' roster led me to do a post called Who Are These Guys? By the end of it, I was convinced that the team had more than enough potential and depth at wideout to sustain a strong passing game in 2010 even without Vincent Jackson.

Since then, I've had a few requests to do the same with other position groups on the team. So (I'll try to remember to do these regularly) today we'll be diving into the RBs on the team and looking at either their NFL history, if that have one, or their college numbers. 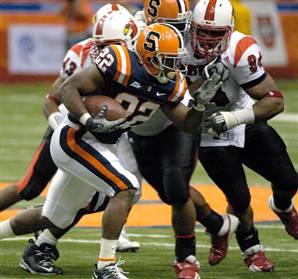 Curtis Brinkley - Curtis was signed as an undrafted free agent in 2009, but just before training camp started he was shot in his hometown Philadelphia ("Killadelphia!") and spent the season on IR recovering from bullet-wounds in his shoulder and leg. It's speculated that the shooting happened due to a fight between Brinkley's sister and her then-boyfriend, as Curtis was on his way to pick his sister up and take her home.

Curtis' college career is fairly common. Due to his size, 5'9" and roughly 210 lbs., and a lack of breakaway speed Curtis was regarded as a backup as part of the Syracuse Orange. In his senior season he was finally given a chance to be "the guy", carrying the ball 237 times (previous high was 139) for 1,164 yds and 7 TDs. Not a bad season at all but, since it was only one season and he still didn't look like an unbelievable athlete at the combine, he went undrafted and eventually chose to sign with the Chargers.

This season is a bit of an uphill battle for Brinkley. He's behind Mathews and Sproles, and possibly Mason and McNeal, on the depth chart at half-back and hasn't wowed anyone with his running at practice. 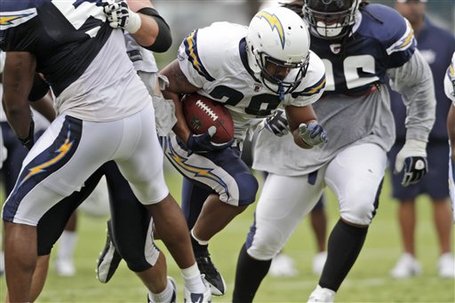 Marcus Mason - The favorite to win the "3rd RB who is probably inactive most weeks" role that was abandoned by Michael Bennett in the offseason coming into camp, Mason may be losing ground despite his experience.

Mason worked his way up the Washington Redskins depth chart in 2009, mostly due to injuries ahead of him, and showed himself to be an adequate backup RB. In 2006, his final year at Youngstown State, Mason rushed for over 1,800 yds on 302 carries (6.1 YPC). I don't know what his competition was like, but that's a good sign that he can take the beating of a full season should he ever have to.

I worry about what happens is Mason doesn't make the team. That most likely means that McNeal makes the squad, and leaves the Chargers with only one legitimately-sized backup RB...and he happens to be the starting FB. For that reason, I am rooting for Mason to have a really great preseason and force the team to keep him on the roster. 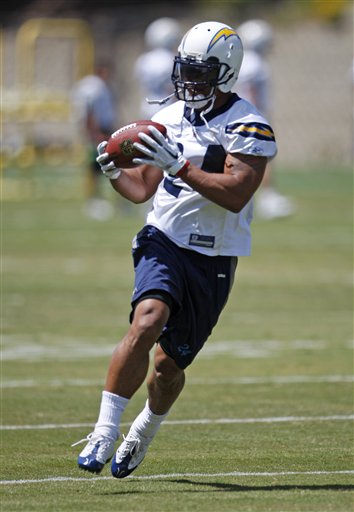 Ryan Mathews - My goodness, look at the size of those calves. Is he planning on kicking through brick walls? Because there's not a doubt in my mind that he could.

I've been telling anyone that wants to listen how impressed I've been with "Bam Bam" so far in training camp. I know nothing of how smart he is or how well he'll play in a pressure situation, but physically there's not many RBs in the league like him. The more I think about it, the more I think the best comparison is Adrian Peterson. Peterson is 2 inches taller, but they're roughly the same weight. Also, at the combine Peterson ran a slightly faster 40 yard dash (4.37) than Mathews (4.45).

The other day at practice I had the pleasure of standing behind Peter King as he talked with someone from the Chargers (Joel Price?) about certain players on the field. Peter King just kept coming back to the same statement, which is "I can't believe how big he is. When's the last time a rookie RB came into the league with a body like that? He's got an NFL body! Usually it takes the kids two years to get to that point, and he's there right now!" The consensus was that, because of where he was physically, Mathews was going to have a huge advantage over other rookies for a shot at ROY and would have no problem being the starting RB all season.

Here's what I see when I watch Bam Bam run. I see great patience, vision usually reserved for 5+ year veterans, and quick feet. The feet are the key to everything. His feet are almost as quick as Sproles', which is mind-blowing when you see how much bigger he is. He gets up to speed really fast, and once he's running at full speed he looks like the giant boulder rolling towards Indiana Jones....which would seem to be a difficult thing to tackle. His speed and balance continue to surprise me almost every time I see him. 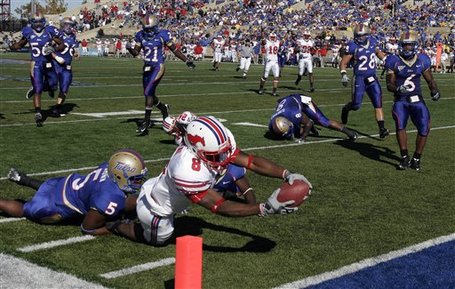 Shawnbrey McNeal - A.J. Smith is a freaking genius. In 2005, he drafts a 5'5" (let's be honest here) RB that's 185 lbs. soaking wet and by 2008 he's one of the most dangerous weapons in the NFL on kick returns, punt returns, as a RB or as a receiver. Seeing that the value on his tiny star has risen greatly, Smith goes ahead and offers him a lucrative short-term deal and goes out and finds a replacement. Nobody else is drafting these tiny speed guys to be RBs (although they're starting to copy him now) because they're so hard to find, and it would appear Smith just plucked out another one when he felt he needed to.

McNeal is a younger Sproles. Before 2008, Darren was a practice star but was not quite ready to be the weapon he is today. He took time, he took seasoning. The same is true for McNeal, but the same potential is there was well. He's listed at 5'9", but I imagine it's closer to 5'7". He has great hands and great speed, but needs to learn to be more patient and also needs to learn how to take care of his body.

With Sproles' contract up again at the end of this season, I think McNeal makes this team easily and probably has the inside track as the 3rd RB right now. He'll spend this year soaking up whatever he can from Darren, with plans to be the younger/cheaper replacement when 2011 rolls around.

As I stated before, a lot of these UDFA RBs didn't get much of a chance in college until their final year. That's certainly true for Shawnbrey, who carried the ball 33 times in his first two years and 236 times in his third and final year. In 2009, he rushed for 1,188 yds (5.0 YPC) and 12 TDs along with catching the ball 31 times for 283 yds and 2 more scores. There's no doubt that the potential is there, and I think the Chargers are grooming him as the eventual replacement for Darren. 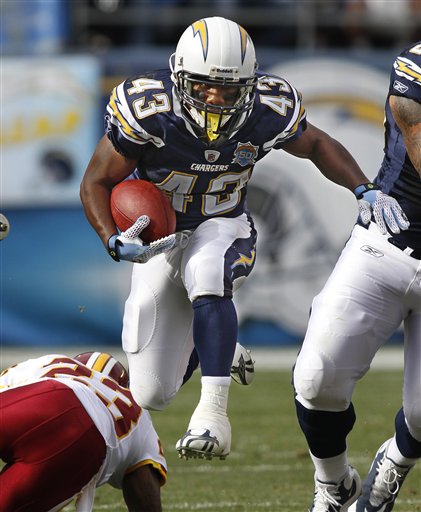 Darren Sproles - The veteran leader of the RBs, and I wouldn't have it any other way. I've been talking about this all through TC, but Sproles' trademark even in college was to always go an extra 15-20 yds at the end of each running play in practice. This is a great way to get yourself in shape, and to convince your mind that there's always energy left in there for another few yards. It's also a great way to piss off a defense, which Darren has done his fair-share of and had to pay the price for in the form of big hits in practice.

Anyways, it seems that one-by-one the Chargers' RBs have taken Darren's lead and started going that extra 15-20 yds at the end of each run. Even if that means the defense gets a little rough in practice to try to keep the RBs on the ground and prevent them from doing it. McNeal was the first to copy is, I believe I've seen Brinkley and Mason doing it, and now even first-round draft pick Ryan Mathews doing the same.

To make it in the NFL as a 5'5" RB, you have to work your butt off and leave your entire heart on the field. You also have to learn how to play smart, how to take hits, and how to follow your blocks. I hate to say it, but with a crop of rookie RBs on the team Sproles is a much better leader/teacher than Tomlinson would've been or could've been. A small part of me hopes that Sproles gets to wear the Captain's "C" this season. 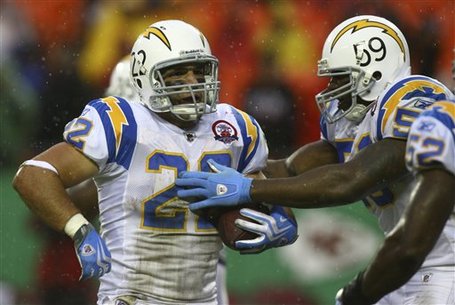 Jacob Hester - I'm really not sure where Hester's spot is on this roster, but I know that he has one. The team loves the fact that he played a lot of HB at LSU, but despite his 5.5 YPC he has shown himself to be a less-than-average option there in the NFL.

Billy Latsko - Billy has a few things going for him. Number one, at 26 he's still very young. Number two, he has shown himself over the last two training camps to be a reliable blocker and receiver out of the backfield. Should there be an injury to Hester or Tolbert, I'm sure Latsko makes the team (or gets signed from the practice squad) and performs his duties fine.

However, on a team and a backfield based almost entirely around versatility, Latsko is just earning a paycheck and hoping a slot opens up somewhere else. Unlike the two guys in front of him at FB, Latsko is not much of a runner with the ball in his hands. As a matter of fact, in three years as a Florida Gator he had exactly one carry.

Billy's not a bad guy to have around, but he's not going to make the 53 man roster unless something shocking happens. 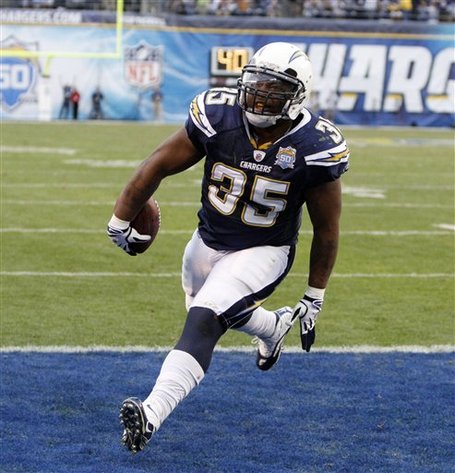 Mike Tolbert - I think Tolbert may be my favorite non-Rivers player this year. I might get a Tolbert jersey. There's nothing not to like about the guy. From his 5.9 YPC, the 5 TDs scored (4 through the air), the 11.3 Yds/Rec (which is just absurd for a FB) all the way down to The Stanky Leg.

I don't know if anyone on the team is more versatile, and he's still young/untrained so he still has a ton of potential for what he could be. The starting FB, worked into the running game as a 2nd or 3rd-string RB, and probably occasionally a WR....Mike Tolbert is one of those guys that you have to look at and say "Damn, A.J. Smith knows what the heck he's doing."