Chargers WRs: Who Are These Guys?

Share All sharing options for: Chargers WRs: Who Are These Guys?

So I've been worrying about the Chargers WRs ever since it became a foregone conclusion that the team won't have Vincent Jackson for most or all of this season. Can Floyd handle being #1? Can Naanee handle being #2? Who are the rest of these guys? I decided that I needed to introduce myself to each of these faces in the crowd, and think more in-depth about the guys that were here before and their new roles, to see if that would calm me down.

Take a journey with me through the Chargers roster and learn more about the guys that could be catching passes from Philip Rivers this season. 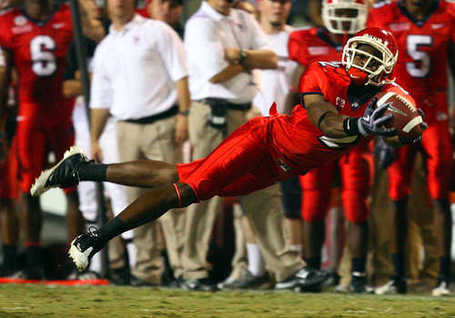 Seyi Ajirotutu - The first of the undrafted free agent WRs on the roster, and supposedly a favorite of the coaching staff already, Seyi hails from Fresno State. In his last two seasons there, he caught 96 balls for 1,472 yards (15.3 Yds/Rec). Based on his size (6'3", 210lbs), he should have no problem getting off the line and fighting for jump balls. The best comparison in terms of his body-type on the team is Legedu Naanee, but the big difference is that Naanee runs a 4.4 40 and Seyi averaged a 4.6 40 at the NFL combine. Ajirotutu is probably not a future starter on this team, but could certainly be a contributor in 2010 and beyond.

Gary Banks - Probably a more interesting story than you realized. Mr. Banks was drafted out of high school by the Chicago Cubs and played three years in their minor league system before realizing his future was in football. He went to Troy University, first as a QB before switching to WR, and put up some pretty impressive stats. In his last two seasons at Troy he caught 129 passes for 1,301 yards (10.1 Yds/Rec) as a WR and also had some big plays running with the ball and throwing the ball. Fans always get excited for those "Slash"-type players that are great all-around athletes and can catch a defense off-guard, well Gary Banks is that type of player.

Gary was signed as a UDFA in 2008, and has spent each of the past two seasons on the practice squad with the Chargers. In preseason work he has shown himself to be a dangerous punt-returner. 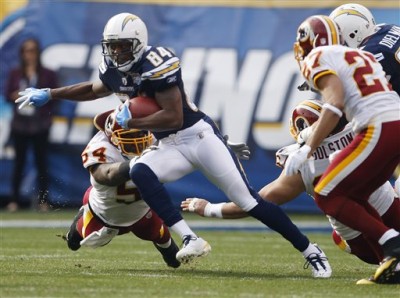 Buster Davis - Or, as he's known around these parts, CBD. If you have never found yourself in the middle of a CBD argument, consider yourself lucky. CBD divides Chargers fan against Chargers fan. Some fans think he's a wimp who won't play through pain. Some think he doesn't have the talent to justify the first-round pick the Chargers used on him. I'm an optimist, I look at how young the kid is (still just 24!) and see the plays he makes when he actually gets on the field and I think that he just needs to grow into his body, learn how to stay healthy and he'll be a very valuable weapon on the Chargers offense. I happen to think his "It's all coming together!" season will be 2010. But that's just me, I'm a CBD-lover.

His ceiling is not a Vincent Jackson replacement. He could potentially be a very good #2 receiver, with blazing speed to stretch the field deep, or if he wins the spot as the slot receiver this year it might be a perfect match for his skill-set. 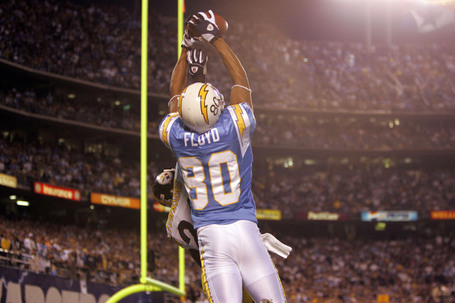 Malcom Floyd - I remember at this point last year being nervous about Malcom possibly being the Chargers #2 receiver (Chambers had already started to look finished). I looked at his lanky body, his history of injuries and his lack of experience playing on the outside and I got concerned. Malcom responded by missing exactly ZERO games in 2009, catching 45 balls for 776 yards (an absurd 17.2 Yds/Rec) and 1 TD. Now I'm a believer, and I'll even say that the low number of TDs probably had more to do with him sharing the field with Antonio Gates and Vincent Jackson than any lack of ability in the red zone. I'm excited to see Malcom matched up against the league's best CBs to see how talented he really is, but a little terrified that he of 14 career starts is the elder statesman of this group. 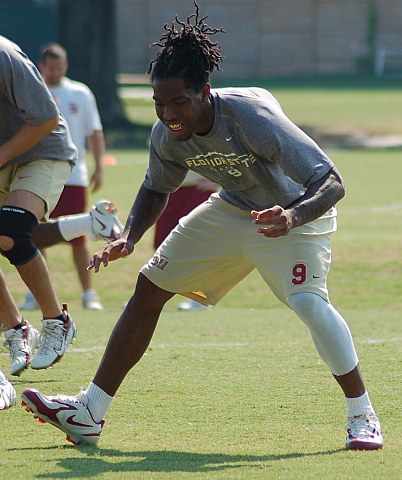 Richard Goodman - An UDFA that I've been enjoying quite a bit on Twitter, actually. I wish I could say a lot of nice things about him, but unfortunately he comes with baggage. In addition to being arrested (and suspended) before eventually being cleared, Richard doesn't have tremendous size (6'0", 192lbs) or speed (4.53 40). During training camp and the preseason, he'll essentially be fighting for a roster spot against Buster Davis, Gary Banks, and a couple of other UDFA WRs that we haven't gotten to yet that are all in that "6 feet tall, good athlete" category. I think it's going to be hard for anyone to beat out Buster, who runs a 4.37 40, and Banks will be next in line since he's spent two years learning the system. 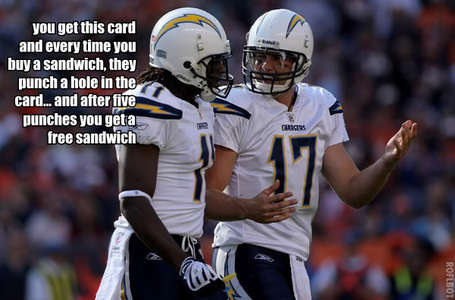 Legedu Naanee - Sometimes known as "LEGEDUDE!", although I'm not sure I'm comfortable with that nickname. Naanee, like Floyd before him, has always been a "project". At one point the team toyed with the idea of making him a TE/FB/H-Back player before quickly moving him back to WR. They want to find ways to get this guy on the field. He's big, strong, fast, smart, quick and has maybe the best hands on the team. Oh, and did I mention he's played a little QB and can be used on trick plays as well? With limited time on the field, I have watched Naanee get better and better each season. Last offseason he seemed to be trying to out-work and out-hustle everyone, and it paid off to the tune of 24 catches for 242 yards and 2 TDs. I think Legedu is more than ready to shine as the Bolts potential #2 receiver, but again....he's never really played on the outside consistently in the NFL so it's hard to predict. 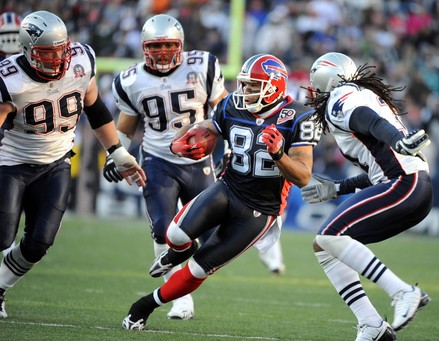 Josh Reed - This one is tough to figure. I was a huge Josh Reed fan in college and thought he was going to be a difference-maker, but he has average speed in a short body (5'10, 210lbs) and has fought nagging injuries most of his career. In 8 seasons with Buffalo, he caught 311 passes and averaged 11.5 Yds/Rec. In a word, he seemed "replaceable". In San Diego, he seems like a very good fit....behind a guy who has the potential to be a perfect fit.

Josh will be trying to beat out Buster Davis for the starting slot WR spot, should V-Jax keep up his promised end of the holdout bargain, and could be kept around even if he loses because he's a veteran player with good hands and work ethic. That's really his ceiling though. If Buster gets hurt, Josh steps in and occasionally catches a pass as the 3rd or 4th option. He's good for that though. 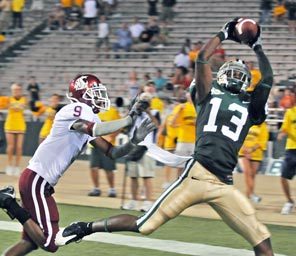 Ernest Smith - aka "Smokey", is the guy that I have my eye on in this group....and not just because he follows BFTB on twitter. He and Ajirotutu come in at 6'3", which make them the second tallest receivers on the team behind Floyd. Seyi has got about 10 more pounds on him, and is also about a quarter-step slower. What I like about Ernest is that, similar to Malcom, he has arms for days. I bet his wingspan is closer to 7' than 6'3". This helps him with jump balls, leverage, and stealing the occasional ball out of the grasp of opposing CBs.

Make no mistake, Ernest is a project. His receptions in four years at Baylor go 6, 21, 7 39 in that order. The only year he had more than 1 TD? His junior season, when 3 of his 7 catches got his team points. He needs to get more consistent, but he seemed to begin that process during the second half of his senior campaign. This could also be partially blamed on the Baylor offense, which has never been regarded highly. It doesn't matter what held him back from being great in college though, what matters is what is going to make him great in the pros. I see Malcom-Floyd-potential in this kid and hope he does enough to make the team in 2010. 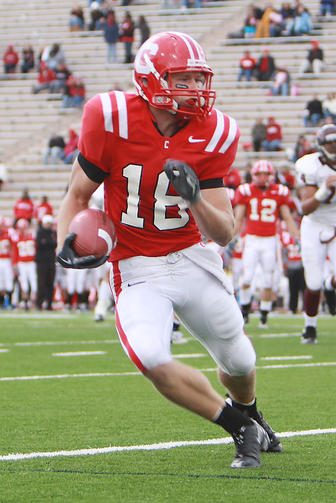 Bryan Walters - ZOMG it's a white WR! Calm down kiddies. You can make your Wes Welker comparison later. For right now, we're digging into stats. Walters stats are VERY impressive on the surface. Roughly 50 catches a year, almost 15 Yds/Rec, lots of TDs. Then you remember that Cornell is an Ivy League school, and that they went 2-8 (losing their final 8 games), and you wonder about the level of competition.

His measureables (40 time, etc.) seem impossible to find, and videos of him on the internet are somewhat absurd to watch because he's bigger, stronger and faster than CBs that don't seem at all interested in playing any defense. Even though he's got okay size (6'0", 190lbs), I think Walters has no shot to make the team and will only land on the practice squad with a good preseason. 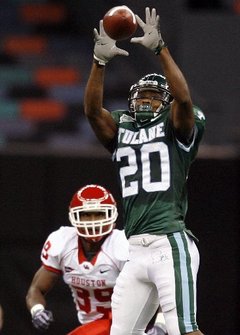 Jeremy Williams - A sleeper pick to make the team, and no I'm not joking. Williams' college stats are a little ridiculous. Let's just go off of his senior season: 84 catches, 1,113 yards, 7 TDs, 38 rushes, 167 rush yards. That's absurd. In 12 games he had less than 5 catches ONCE. And even though he was catching the ball a ton, almost none of them were built up stats....his Yds/Rec was over 13 in 2009 and over 16 in his sophomore and junior seasons. Although his size (6'1", 205lbs) is about average, and the competition he was up against wasn't top-tier, it's impossible to ignore the production WIlliams has put out in his four years as Tulane.

So there you have it. It's a rag-tag group of guys, but they're supported by one of the league's best QBs and he still has the league's best TE....so they'll be just fine. If I had to make a prediction on who would make it, it would be Floyd, Naanee, CBD, Reed and one other guy from the group of Smokey, Williams and Ajirotutu. However it plays out, credit A.J. Smith for finding a bunch of guys off the street that have the talent to step in and play right away if the team needs them to.

I think Floyd will be good as the #1 guy, maybe even as good as Jackson, if he can remain healthy all year. What will make his job easier is if Legedu takes that next step and learns how to become more than just a possession receiver. We've seen flashes of speed that, mixed with his size and strength, could make him a more-than-legitimate #2 receiver in 2010. And personally, I'm a CBD fan. He's got the best speed on the team, has always had great hands and I think his year of "time off" allowed him to build up his body to a place where he'll be able to stay healthy. I hope he has a great preseason and wins the slot WR job, because an offense with that kind of speed, Floyd's hands, Naanee's strength and Gates' Gatesy-ness can still be the most dangerous passing offense in the league....even without Jackson.