Fightin' Words: Why I Don't Fear the AFC West

Share All sharing options for: Fightin' Words: Why I Don't Fear the AFC West

I know this is probably going to ruffle some feathers, but I have absolutely zero fear of the Chargers AFC West competition heading into 2010. I know that's probably a little too much bravado, but I still see giant holes/issues with these other teams that can't possibly be fixed by 2010.

After the jump, an opinion piece. I'm going to go through the Broncos, Chiefs and Raiders and tell you why I'm not afraid of them....and why I should probably be a little afraid of them. Also, as always, I'll back it up with stats. 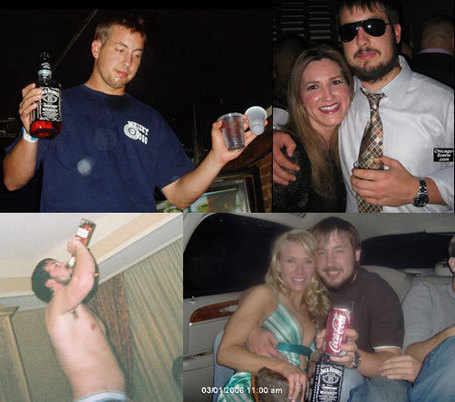 Even the most passionate of Broncos fans cannot deny the facts. Yes, your team started the season 6-0...they also ended the season 2-8. Yes, your starting QB didn't throw an interception until Week 5 and didn't throw his second until Week 8, but he threw 11 picks in his last 9 games. Yes, your coach and your team had some of the best highlights of the year, but your fanbase also completely jumped off the McDaniels bandwagon when things started spiraling downward and your offense is bound to suffer by the loss of your #1 receiver (I know, pot meet kettle).

If I were a Broncos fan, I'd be pissed. I can talk about Kyle Orton being mediocre all day, but I'm smart enough to know that you can win in this league with a mediocre QB if he's not stupid (Jake Delhomme has been to a Super Bowl!). That also makes me smart enough to realize that you can't win without a defense, and the defense was the biggest reason for 2-8 last year. Those 2 games they won? They gave up 6 points to the Giants and 13 to the Chiefs. The 8 they lost during that stretch? 30, 28, 27, 32, 38, 20, 30, 44. I know Josh McCoach is supposed to be an offensive genius, but I don't think his plan is to win by scoring 40 a game.

So going into the draft, the Broncos needed young blood and impact players that would turn the defense around. First pick, offense. Second pick, offense (TIM TEBOW!). Third pick, offense. Fourth pick, off....okay, this is getting ridiculous. Denver's first five draft picks were used on offense. Which, in fairness, they probably also needed after losing the centerpiece of their offense (Brandon Marshall) and replacing him with rookie Demaryius Thomas.

Shouldn't I be a little bit scared? Well, the defensive line has gotten a make-over with Jarvis Green (good), Justin Bannan (bordering on very good) and Jamal Williams (good to great). That's an improvement. I'm not sure where FA Nate Jones fits into their defense, but he seems like a heck of a player. They're still an old team, and they lost their mastermind Defensive Coordinator to Miami, but from a talent perspective they've improved on the defensive side of the ball. That scares me a little bit.

What's funny is I'd be a lot more scared if they hadn't drafted Tebow. If they had used that pick on an impact defensive player, that'd improve the team more and keep them away from this headache. However, there's already such a fanbase behind "Jesus of Gainesville" that every off-target Orton pass is going to rile up the congregation. Maybe I don't see the genius hand McD has dealt himself with the Tebow pick, but it seems like for 2010 it has the potential to cause big trouble. 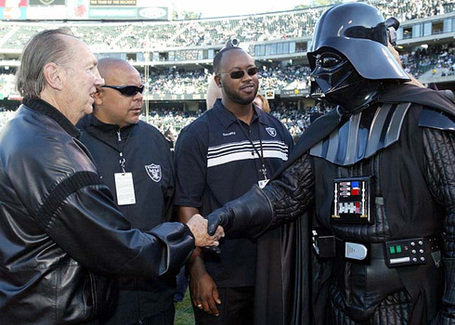 Let me make one thing perfectly clear, I am an Al Davis fan. He's not evil, he's brilliant. If you look at his entire NFL career, and not just the last decade, you see a man that's had more influence on the sport than just about anyone else. Hell, the guy is just as responsible for the success of the AFL as guys like Sid Gillman were. So, take all the potshots you want at Al in comments...but expect a response about how ill-informed you are about Al Davis the Owner (and coach). Al Davis the GM leaves a little something to be desired, but I think he's more loyal than stupid.

The 2002-2003 Oakland Raiders made it to the Super Bowl (in San Diego!) behind Rich Gannon and Bill Callahan. Here's how many games they've won in each season since: 4, 5, 4, 2, 4, 5, 5. Yikes. This is a team that always scares people a little bit, but obviously never comes close to even being a .500 team. History tells me there's nothing to be afraid of here. Halfway through the season there will be in-fighting and serious injuries and stars that are just begging to leave again, right? We can depend on that right?

Shouldn't I be a little bit scared? Yes, but shhh....don't tell anyone. The Raiders got a lot better in the offseason. Cutting JaMarcus Russell and replacing him with Jason Campbell would've made for a good offseason, but they also drafted well and filled holes on their team. The offensive line is still a bit of a question mark, but should be improved. Darren McFadden is still an injury risk, but Rock Cartwright and Michael Bush are legitimate RBs. Darrius Heyward-Bey might still have butter all over his hands, but their WR depth is strong. Their secondary is one of the best in the league, and getting better.

The Raiders are a team that could be very good. They have a lot more talent than people give them credit for, and Cable seems to know what he's doing as a coach. It's a matter of finding a way to bring it together and to keep things.....a little less crazy than they've been.

Chiefs fans are in love with their team, and I can't seem to figure out why. Every single team in the league starts with it's QB, and maybe that's why I'm not worried about the rest of the AFC West. Jason Campbell is alright, but he's 28 and still living off of his potential. Kyle Orton is okay, but nothing special. Matt Cassel is a catastrophe.

I remember the stat I found last year that had me sure that the Chiefs were nothing to worry about. Here it is in a nutshell:

I saw that and went "Holy crap, he's Rob Johnson. He's smart, is athletic and has a strong/accurate arm.....and nobody is paying attention to the fact that he holds onto the ball so long, and takes so many sacks, that he'll always kill his team." I remember pleading my case for this over at Arrowhead Pride, but of course was seen as a troll. "He was essentially a rookie, he just needed time to get comfortable. He's comfortable now." Hmmm...

Hmmmmmm. Interesting. Well, perhaps maybe Matty will "get comfortable" one of these days. I just don't see how that's anything more than hopes and dreams, and I don't see how the Chiefs make a run to the top of the AFC West with him pulling in $12 million this season.

Shouldn't I be a little scared? Well, this is the point where I face facts and say that the Chargers probably have the worst defensive line in this division. KC's is pretty good, and if they had anyone better than Mike Vrabel to play LOLB I would probably be concerned with their pass rush. Their secondary is good, very tough and physical, but their ILBs could either be good or atrocious this season. That's true of most 3-4 defenses though.

The Chiefs' WRs leave plenty to be desired, but everything revolves around Cassel and that's always a scary proposition for Chiefs fans and fans of opposing teams. If he remains the same guy he's been, the Chiefs go nowhere. If he somehow turns it around and stops taking so many sacks/hits, this team will get a lot better in a hurry.