Share All sharing options for: The 2010 Chargers Hot Seat

We aren't quite ready for training camp yet, but this GM is ready to start putting people on the hot seat. The hot seat for me means that there are expectations that need to be met or else there will be consequences. Others may say that Philip Rivers is on the hot seat because he needs to win a Super Bowl to keep up with Drew Brees, Eli Manning and Ben Roethlisberger (not to mention his future candidacy for the Hall of Fame and the title as best Chargers QB ever), but I'm not going to do it. Why? He has time. It doesn't have to be this year (even though we'd like it to be) and I want to focus my hot seat on guys that will face consequences this year. Norv Turner won't be on the hot seat either. Norv Turner haters will have to grind their axes elsewhere because this GM is committed to Norv until the end of his contract. Instead I'm going to mainly focus on things that I think will have consequences sometime during the 2010 season or in the next offseason.

Okay, enough with the chit chat, let's start heating up some seats. 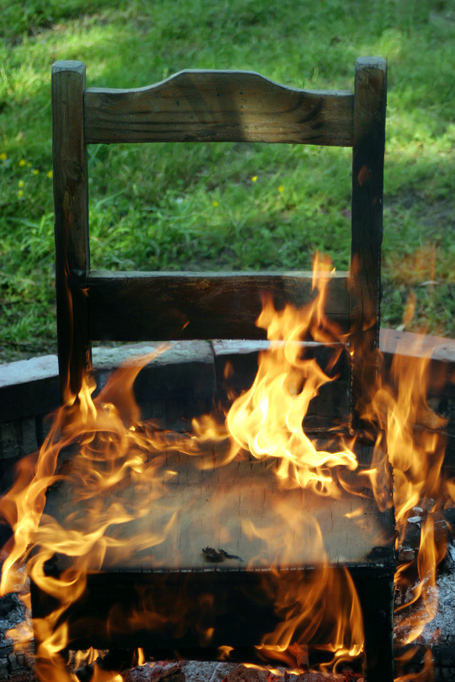 Yes, all you Charger fans are on the hot seat. Those that are familiar with Gaslamp Ball will know that tolerance is getting slim for foulweather fans. When this season gets underway I think the fanbase needs to get pumped. This is a period of winning in San Diego we haven't seen in a long time and we shouldn't waste the first 10 weeks of every season bickering about where this team is going to be. Put on you Charger gear, get out to the stadium, tell everyone we're Super Bowl bound and enjoy the crap out of this era. Once our great QB starts hitting our future Hall of Fame TE for touchdowns let's not dwell on who isn't playing for the Chargers and just bandwagon up. Given the current labor situation we should be glad to have Malcolm Floyd, Darren Sproles and Shawne Merriman and not worry so much about the guys sitting out who probably wouldn't be Chargers if the CBA had been worked out sooner. Bolt pride, baby, Bolt pride.

This one's pretty obvious. The Chargers brought in 2 veterans at his position and traded a away someone that might have been a franchise cornerstone to make way for this former 1st round pick. Our GM made room for Cason because he thinks he's the future, but the fact that he hedged his bet with veterans on the roster says that the leash is short. I think we know from dealing with past young CBs that we aren't necessarily looking for a ton of INTs from the position and we know he's going to make a few blunders. Just keep it to a minimum kid and don't get beat six ways 'til Sunday.

As I mentioned earlier, we are lucky to have Shawne for one more year. Returning from injury last year he didn't immediately ascend back to his Sack King status. All of San Diego is looking for him to do a lot more Lights Out dances or else find another place to gyrate periodically. Also, any more bumps and bruises that keep him out of the lineup is another opportunity for Larry English to steal his job.

Personally, I was pretty convinced that young Brandyn Dombrowski could steal away Clary's starting job this year. However, with Marcus McNeill most likely sitting at home though this Dombrowski is needed as a backup at both positions and won't get a chance to compete for the starting spot. So, Jerome's job seems pretty safe for now and even a midseason replacement seems unlikely. He is, however, a free agent at season's end, and, as we've seen this offseason, Chargers don't get a contract extension unless they earn it.

I guess you could call this the hot couch. Multiple guys are on notice because nothing at the position is set in stone for the 2011 season other than Donald Butler having some kind of role. Stephen Cooper has been a leader on this defense, but not only is he not getting younger but instead seems to be getting old in a hurry. Kevin Burnett needs to get past his injury woes or else remain a role player (although maybe not with the Chargers after this season). Brandon Siler has captured the fanbase's imaginations, but he still needs to prove himself on the field for one more year before the front office makes any commitments.

This seat isn't quite as hot as the rest. There's not an obvious exit path here, but the expectations are high despite zero production at this level. The main way I could see the franchise turning on Mathews is injury. Mathews wasn't the healthiest in college and he needs a full season of production in San Diego to keep them from going after somebody to compete with him next year. This San Diego offense wants a running game badly and it may only take 1 year to figure out if Mathews is the guy that can get it for them.