I feel like, these days, I need to start each post here at BFTB with "I know you're scared; we're all scared, but that doesn't mean were cowards."

Last year at this time we faced doubts. Going into Norv's third season, all anybody wanted to focus on was the W-L trend. 14-2, 11-5, 8-8. Uh oh, heading downhill. I had a lot of faith. I saw the good and tried to ignore those whispers and worries. Most of us did, and our faith felt worth it when the Chargers won 11 straight games to finish the season 13-3. Even if we lost in the playoffs, this team is back to heading in the right direction. As Herm Edwards' famously said, "We can build on this!"

So why the fear? Because this doesn't feel like the same team anymore. The best WR on the team? Gone for at least half the season, maybe the entire season. The star Left Tackle? The same. Special teams captain? Enjoying the sunny beaches of Florida. The greatest player in franchise history? Signed with the enemy New York Jets. The potential-filled, human-highlight-reel CB? Traded to those same Jets.

I'm not going to sit around and think about that. I'm ready to move on. Let's meet the new guys and restore our faith in this team as a championship contender. First up, potential starting LT Tra Thomas. 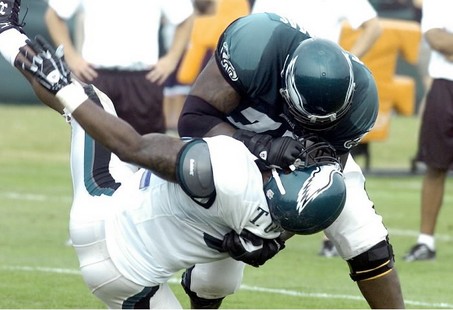 "I wish I knew how to quit you"

Offensive lineman are sometimes difficult to evaluate because almost no stats are kept on them. In situations like these, I turn to Pro Football Focus and their ranking system. The easiest way to check the validity of any ranking system is to see who ranks at the top of the list and hold that against common-knowledge. 2009's top OT's on PFF were:

Those top 4 guys are superstars, and Vollmer is a good OT that was assisted by the Patriots' offense (and the fact that they seemed to run screen with him as the lead-blocker a lot). To give you an idea of what Thomas will be replacing, Marcus McNeill was ranked as the 49th best OT with a rating of -8.2. Their rating system says that he was above average at pass protection (1.3), below average at run-blocking (-4) and let through quite a bit of sacks (6), hits (9) and pressures (23) on Philip Rivers. Funny enough, that puts him below Jeromey Clary, who was average in pass-protection and above-average in run blocking.

At 35, Thomas may be past his prime....but it was a heck of a prime to have. He was the 11th overall selection in the 1998 NFL Draft, has made the Pro Bowl 3 times and was an All-Pro selection once. He spent 10 years with the Philadelphia Eagles before signing with the Jacksonville Jaguars last year, who benched him and then released him due to poor performance.

In a nutshell, this is Kynan Forney all over again but that does not guarantee the same result. It's a risk with backup plans. Neither Tra Thomas or Brandyn Dombrowski are going to play at a Pro Bowl level in 2010, but the Chargers don't really need either of them to. All the team needs is for one of those two guys to stay healthy and play at an average level, and as someone who believes in the law of probability I think there's a good chance of that happening.