This is a sad day for Charger football, but in thinking about Coryell the man, he was the very definition of a life well lived.  Don Coryell defined a generation of Charger football from 1978-1986.  He was a master of the offense, every Sunday was showtime when he coached.  The Chargers were the aerial circus, they were what other offenses aspired to.  And although known for offense, in his early years the defense in the form of Louis Kelcher, Fred Dean and Gary 'Big Hands' Johnson tore up opposing offensive lines. 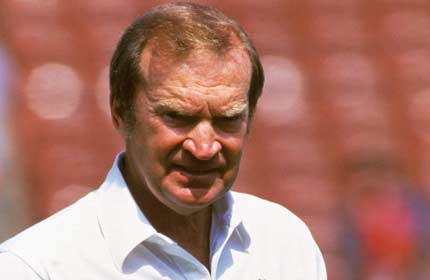 Coryell was an odd contradiction.  If you watched him on the sideline staring at the game, you sometimes feared he was going burn holes right through players.  His typical stance was bent at the waist, hands on knees with the fierce gaze that only the totally consumed produce.  Yet to see him in a press conference he was the most genial, enthusiastic man you could hope to meet.  He heaped praise on his players and coaches, he was a class act through and through.  He spoke with a lisp, but he was so comfortable in his own skin you hardly noticed it.

I was in high school when Don Coryell became coach.  We had just moved up recently, and I had been a tepid fan of the Rams.  Somebody mentioned the Chargers had won their last six games under Coryell and I scoffed, they would be terrible again next year.  But there was no cable back then and Chargers football was all there was, so I watched the next season and was hooked.  It was an aerial circus and sometimes it crashed and burned, but for pure fun there was nothing better.  Dan Fouts, Kellen Winslow, Charlie Joyner and John Jefferson; they didn't just dissect defenses, they dismantled them all under the steely eyed gaze of Coryell.

Shakespeare wrote "The moon's an arrant thief, and her pale fire she snatches from the sun."  That was true for Coryell's offense, there were many that were similar, but they were imperfect reflections of the real thing.  His Chargers would lead the league in passing from 1978-1983.  Some say it's a pity he didn't make it into the hall of fame on this last go around, and they're absolutely right.  It's a pity for the hall of fame.