Hello everyone.  It's been awhile since my last post; frankly, I've been struggling to find a fresh angle from which to approach a topic when there is little-to-no new news.

For this current edition, I am going to share my fan experience when I journeyed to Lambeau Field in September 2007, to see the Chargers play the Packers.  Many of you may remember this game well, a shootout between grizzled veteran Brett Favre, and young gun Philip Rivers that went down to the 4th quarter.

I think this angle is relevant, because the path to a successful new stadium lies in creating a) a great game day experience, b) a destination that people will visit when football isn't being played, c) a point of civic pride for all persons in a region, whether die-hards, casual, or non fans, and lastly d) a decent sense of history - as in a place that acknowledges the shared experiences between fans and team.

I can think of no better example than Lambeau Field.  More below the jump.

A little background:  My wife's family is a bunch of die-hard Packers fans, most of whom are from Wisconsin.  In the 5 years my wife and I have been together, she started with me as a Packers fan... however, by 2007, she was a Wisconsin native who wore an Antonio Gates jersey to Lambeau Field.  This victory over the in-laws more than made up for the Chargers coming up short that Sunday. 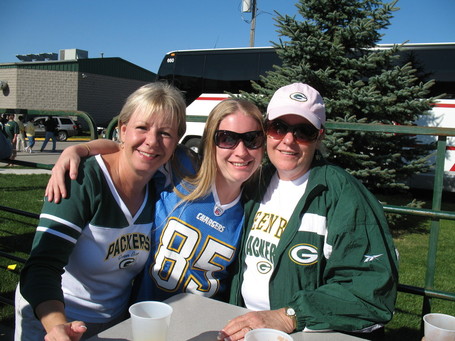 My aunt-in-law, my Wisconsin-born wife turned traitor, and my mother-in-law.

Anyhow, on to the Game Experience

We were part of a tour group that began the Sunday with an all-you-can-eat-and-drink at Brett Favre's Steakhouse, located a few blocks away from Lambeau Field.  There was good Chargers representation at the party, which featured unlimited burgers, bratwurst, beer, bloody marys, and screwdrivers... 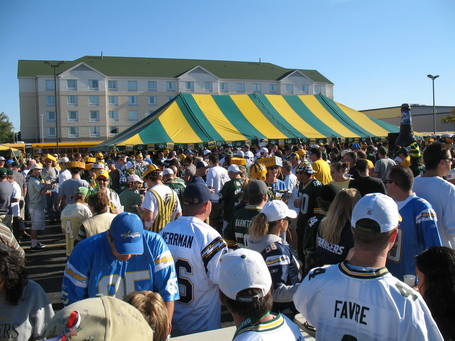 Packers' fans are generally a pretty cool bunch; for every jerk, there were 5 others who would step in and tell you how good your team is.  After 3 hours of great revelry, we made our way inside the stadium. 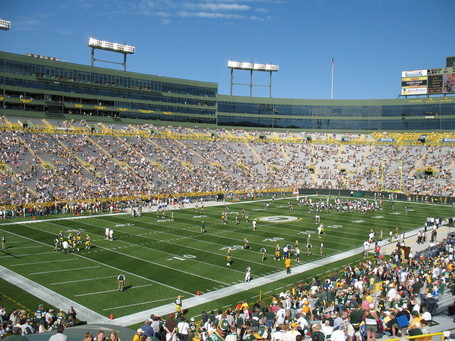 View of Lambeau Field from our seats.

This building absolutely drips with history - more would be made on this day, when Favre tied Dan Marino's career passing TD record.  No one complained when my wife and I flashed our small handmade sign... 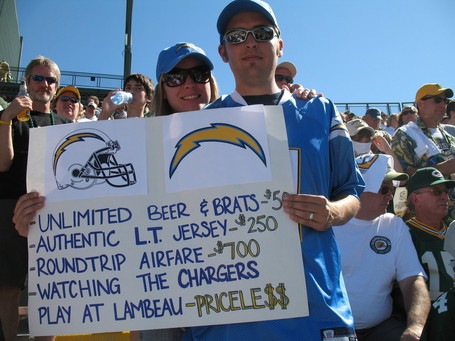 A Priceless Experience - me and my wife.

Because Packers' fans, above all else, respect loyalty and knowledge from fans of opposing teams.  They have no issues (except maybe with Vikings fans), as long as you're not egregiously obnoxious.

Furthermore, and this goes into the importance of the fans experience, these fans are right on top of the field, the sightlines are phenomenal, and the history of the stadium takes precedence over the luxury boxes and VIP suites.  I realize this point is moot with most new stadiums around the league - but  the importance of die-hard fans being this close to the action cannot be underemphasized.

There is an intimacy between these fans and their team, both through the history and closeness of the seats.  This, maybe more than the weather, is why Lambeau Field is one of the only true home-field advantages remaining in the NFL.  This intimacy is something the Chargers must exploit when / if they build a stadium downtown, and the smaller size of the available land gives them a great excuse to do it.

Part of the appeal of Lambeau Field, and something the Chargers must consider when building a new stadium, is how to get people to visit when games are not being played.  Admittedly, the Packers have the advantage of a national fan base and decades of history.  However, with some work, this is something the Chargers' organization can easily rectify. 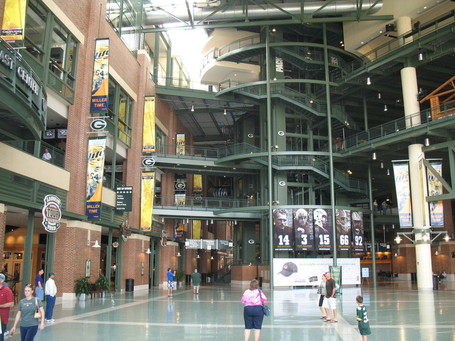 The Lambeau Field atrium was part of a $400 million expansion and renovation that the Packers began in 2000 and completed in 2003.  The team holds an annual draft party in this atrium, where over 4,000 fans watch the draft.  Additionally, there is a restaurant that is open to the public year round, the de rigueur Packers Pro Shop, as well as stadium tours, and the Packers Hall-of-Fame.  These are additional points of interest that help the facility generate business year-round.

Lambeau panorama, tour on the day after the game 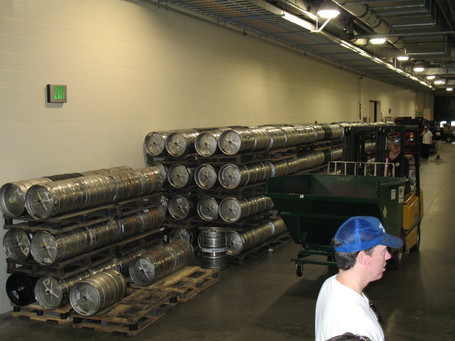 Beer, beer, and more beer, close to the locker rooms 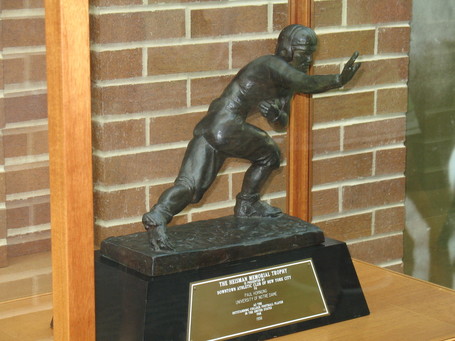 The Packers Hall of Fame 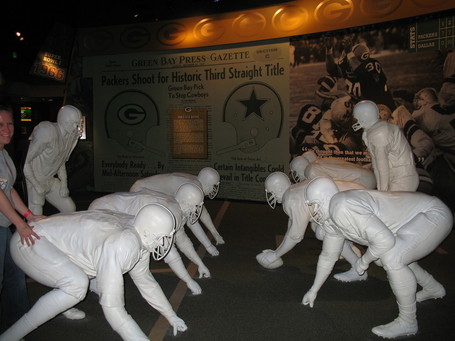 Who knew?  My wife was the reason Bart Starr's QB sneak was successful (see far left). 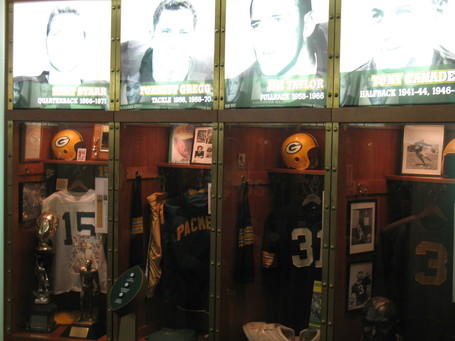 The Chargers, while not having the championship pedigree of the Packers, have had as much of an impact on the modern NFL as any other franchise has since 1960.  A new stadium could have a true Chargers Hall-of-Fame, as opposed to the smaller exhibits at the Breitbard Museum in Balboa Park.

The Chargers could have an exhibit tracing the modern passing game, from Sid Gillman, through Don Coryell, to the current day.  Before you laugh, consider that the Chargers are running essentially the same offense now that they ran when Coryell was Head Coach - with good players, they are again among the best offenses in the NFL.

The Chargers could have replica lockers for each player in their Hall-of-Fame, much like the Packers have here.  Special exhibits could be devoted to Pro Football Hall-of-Famers like Gillman, Dan Fouts, Lance Alworth, Charlie Joiner, Kellen Winslow, etc.  Imagine the swell of pride you might feel as a Chargers fan, walking into a museum like this, devoted to your team?

A Hall-of-Fame like this reinforces the intimacy between the fans and the players, it gives the fans a sense of ownership that might not otherwise exist.  Also, it's a great way to bring history with you, when your long time home (Qualcomm Stadium, in our case) no longer exists.

We all know that a new stadium in San Diego is a dicey proposition at best.  If we are able to build a new stadium, however, the Chargers can make it a win for everyone by looking at the examples Lambeau Field provides, and doing many of the same things. A stadium that has many, if not all of these features, becomes a one-of-a-kind experience that people want to share over and over again, as opposed to an impersonal facility that is designed to serve only those with the money for the moment.

By looking back, the Chargers can help insure that they, their fans, and the community can move foward together, for a long time to come.

I will be posting about a Q&A being held by the San Diego Stadium Coalition, with Mark Fabiani answering audience questions.  As I will be in attendance, and will (hopefully) have a chance to ask questions, please post questions you have for Mr. Fabiani (in addition to your thoughts on the article) in the comments below.  I will make sure to write down some of the common questions at the Q&A, and hopefully, he will be able to answer them.