Trading draft picks is a big part of the NFL draft. A rebuilding team can trade back and pick up picks (like Cleveland did multiple times last year) and a team that feels that they need to get "their guy" can sacrifice their later picks to do it. One of the most well known ways to evaluate or mock trades is to use the famous Trade Value Chart. The original trade value chart was created by former Cowboys Head Coach Jimmy Johnson. Others have tweaked it and I prefer the one posted at WalterFootball.com that makes the top few picks more equal in value and adds value to second round picks. For more detail on this chart you can refer to WalterFootballs draftology articles on the subject (1; 2). Here's the chart copied from that website: 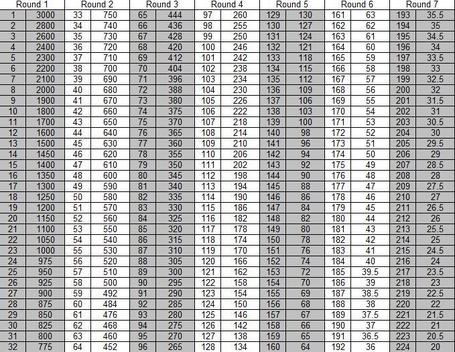 The important thing to keep in mind with this chart is context. You can't just do the math on a potential or actual trade and make a declaration about it. Last year, the Browns traded the #17 overall pick to the Buccaneers for the 19th pick and a 6th rounder. Well, according to the draft value chart the didn't get proper value. Then, they did it again by picking up a 6th rounder for trading that 19th pick to the Eagles for 21st overall. The context here is that the Browns knew which guy they wanted (Alex Mack) and figured they knew he'd be available later. They also needed to bring in players since they were (and still are) in rebuilding mode so they weren't comfortable staying put and drafting Mack. If you are in that situation, then getting any value for your pick and still getting the same guy is a decent deal.

One thing you may ask yourself: Why do we need a chart? The chart is important to help facilitate getting deals done. If each GM had wildly different ideas of what picks are worth then it'd be difficult to make trades. As I said at the start of this post, trades are important so there's an incentive to come to some sort of agreement on how to get those trades done. Not every GM will use the exact same chart or even keep a chart handy at the draft, but they definitely have some method that will help them come to agreements on deals. This is the closest approximation to those methods.

After the jump I'll take a look at past Chargers trades and breakdown the chart to look at potential trades in 2010.

The first thing to try and understand when talking about recent Charger draft day trades is the idea of the value of future draft picks. The picks in future drafts have historically been significantly discounted compared to their current draft brethren. IF we look at the 2008 "Hester" trade you have the Chargers acquiring the 69th pick in the draft (TVC value: 412 pts) from the New England Patriots for the 160th pick (64 pts) and their 2009 2nd round pick. The difference between the 5th rounder given up and the 3rd rounder acquired by the Chargers is 348 pts, which is the equivalent of approximately the 80th pick in the current draft. The pick ended up being the 47th overall pick (thank you 8-8 record) worth 610 pts at the time of the 2009 draft. That's a 43% discount that the Chargers gave the Patriots on that pick. Context is important here because the Chargers didn't have a 2nd, 3rd or 4th round pick in this draft so they discounted that 2009 pick in order to pick up another quality player in the draft before the 5th round. Of course, that pick was Jacob Hester so the quality of that pick in hindsight is very debatable.

In 2007, the Chargers made another trade involving a future draft pick. The Chargers acquired the 37th overall pick (710 pts) by dealing to the Chicago Bears the 62nd (468), 93rd (280), 167th (57) and their 2008 3rd round pick. Amazingly, that gave that future third round pick an effective value of -95 points. Oh, A.J. The context here was that the Chargers didn't have that many open spots on their roster and were willing to "throw away" picks in order to get acquire a future starting safety (Eric Weddle). It was also rumored that teams were just putting a very high premium on those high 2nd round picks that year and A.J. had a tough time finding a dance partner for that trade. At least Weddle turned out to be the starter they thought he would be.

In 2003, the Chargers didn't use any future draft picks and gave up 1200 points in the 19th overall pick for 1298 points in the 30th and 62nd overall picks. A slight discount, but basically a fair trade even if it did cost us a shot at Troy Polamalu for Sammy Davis and Terrence Kiel.

Finally, let's get to some scenarios for this year's draft. I'll leave out future draft picks and let you guys speculate on those (although I think we'll need all the picks we can get over the next few years so use them wisely). To trade up in the first round the Chargers could use their 1st and 2nd round picks (worth a total of 1555 points) to trade up to #13 for a shot at someone they really like. If they really got crazy and added in their 3rd round pick (290 pts) then the 10th overall pick would be in their grasp. That trade would be Ditka-in-a-dreadlocks-wig crazy, but it's out there.