Share All sharing options for: Stadium Thoughts and Musings, Part 3. What's the matter with Qualcomm Stadium?

As part of this ongoing series looking at stadium related issues, one of the most pressing questions is simply: What's the matter with Qualcomm Stadium?

Simply stated, it is a 42 year-old, multipurpose sports facility that has 2 major tenants - the Chargers and the San Diego State Aztecs football team, as well as a host of deferred maintenance problems that have only grown more pronounced over the last several years.

The stadium, by it's multipurpose design, has a high proportion of seats located in the corners of the field and end zones, compared to football-only facilities. Furthermore, many of these seats, as well as some seats, between the end zones, are considered obstructed view seats (see image below). 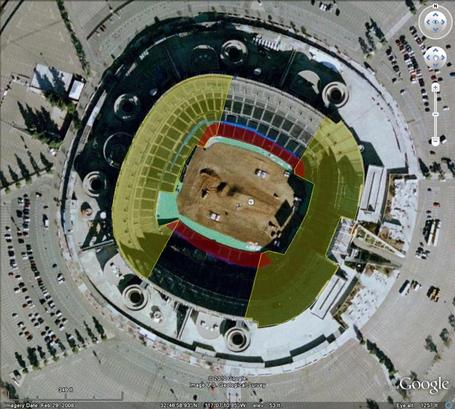 For a comparison, take a look at Miami's Dolphins Stadium - completed 20 years after Qualcomm. 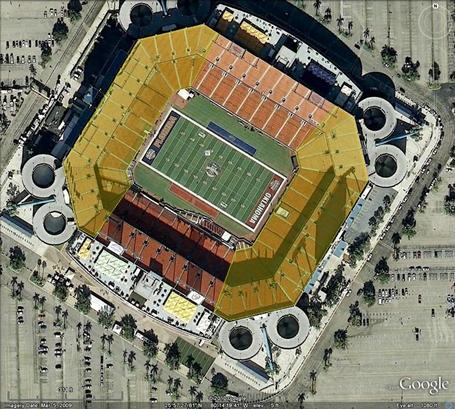 It gives me no pleasure to make the obvious conclusion: Qualcomm, while a functional football stadium, is clearly nowhere near the current seating standards for any NFL team, let alone a major college program.  Furthermore, the seats along the sidelines are quite far from the field, and the closest seats are obstructed.

Beyond the seating a stadium design issues, there are numerous structural deficiencies with the stadium.  Most of the remaining article is excerpted from the Citizen's Task Force on Chargers' Issues, published on March 6, 2003.

During the 1997 expansion, no structural upgrades were made to the existing portions of the stadium, nor did the expansion address back-of-house issues.

As noted during several stadium tours, serious cracks were present throughout the stadium; exposed rebar is rusting; poor seepage causes water settlement; and during rainy weather, fans must be reseated in other areas. Deteriorated expansion joints allow water penetration to seating areas and locker rooms. Cast iron sewer and water pipes are from the original construction. Concrete is badly stained, chipped, and in some areas, very jagged.

Aging escalators break down and staffing is required during games to insure immediate response time to problems. Aging plumbing is a constant issue. Maintenance crews operate out of storage containers located ¼ mile away from the stadium. Kitchen facilities are inadequate to support the current stadium capacity.Concourses are narrow with an inadequate number of food facilities. Restrooms, especially on the view level, are antiquated and inadequate. The locker rooms are too small. A single visiting team is required to split up and use two separate locker rooms.

Over the next several years, major maintenance will be necessary to address the stadium issues described above. Approximately $3.0 million will be required to make concrete repairs, resurface the parking lot and replace or overhaul the escalators. The estimated cost of a new sound system is approximately $3.0 million. In addition, as the stadium ages, plumbing, electrical and equipment problems could develop with significant cost implications.

Estimates for deferred maintenance range from $10 - $50 million. To summarize, in comparison to the newer stadiums around the country, Qualcomm Stadium does not measure up in several areas. Sightlines are not as good; concourses are narrower which impedes traffic flow; the concession stands and restrooms are insufficient; locker rooms are significantly smaller; the back-of-house facilities are minimal and press box facilities are inadequate.

Although Qualcomm Stadium is 35 years old and one of the older stadiums in the country, it is considered to be well-maintained and performs admirably in hosting 110 events per year. The stadium’s 18,000 plus parking spaces and trolley station provide for easy access for events.

In conclusion, Qualcomm Stadium can continue to operate as a viable facility over the next several years with the addition of more maintenance funds. However, at some point in time a determination will need to be made about whether it is cost effective to build a new facility or continue to put money into an aging stadium.

As we all know, the deferred maintenance problems have only escalated over the 7 years since this report was first published.  In addition, the results of an audit released on May 12th of last year, indicated that the facility is no longer "self sustaining and largely dependent on money from city subsidies."

To me, the question really isn't about finding ways to keep Qualcomm going.  The question is find a solution that keeps the Chargers in San Diego on a long-term basis, in a financially responsible way.

Next issue:  One man's vision of downtown.