On the first approval rating post, we found that a lot more people approve of the job Norv Turner is doing than would probably be willing to admit to it (the comments section of that post is proof of that). That's fine, at least it showed that his success as the Head Coach of the San Diego Chargers is being appreciated.

Now we move on to an equally-criticized figure in General Manager A.J. Smith. The funny thing about both Smith and Norv is that their critics seem more concerned about how they act out their emotions than how they actually perform in their duties. After the jump (and feel free to vote before reading the rest of this post, if you already have an opinion), we're going to dive into A.J. Smith's successes and failures to see how it shakes out.

A lot of what happens here "after the jump" in my own opinion mixed with stats. To give you my true thoughts on A.J. Smith, we need to go back to when he was the Assistant GM to John Butler.

John Butler was hired to turn the 1-15 Chargers around. Boy, did he ever. In his first offseason he turned the #1 pick (Michael Vick) into LaDainian Tomlinson (Hall of Famer) and Drew Brees (potential Hall of Famer). That 1-15 team improved by 4 wins to go 5-11 in 2001, but the team continued to struggle to win close games late. This was the strongest criticism of Head Coach Mike Riley, so Butler replaced Riley with Marty Schottenheimer.

In his second year as GM, the Chargers got to .500 (8-8) and looked like a future championship contenders with Tomlinson and Brees beginning to reach their potential. Butler saw one glaring problem, and that was that his young RB was leading the team (by quite a bit) in receptions. If this offense was going to become one of the league's best, it needed a dominant #1 WR. Enter David Boston. 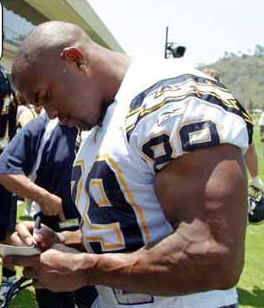 At 6'2" and 228lbs, David Boston was big enough to be a power RB (LenDale White is 6'1" and 235lbs). Being that size, with that strength and having 4.3 speed.....that was unbelievable. Most Chargers fans were cautiously optimistic when the team signed Boston, looking at the potential and thinking "maybe he just works out a lot." Not so much.

In the last major move as General Manager, John Butler handed a 7-year $53 million dollar contract to Boston. It was a gambler's move, putting his reputation on the line on the chance that The Thing would fulfill his potential in San Diego with Drew Brees.

Butler's death immediately before the 2003 NFL Draft cast a shadow over the entire season for the Chargers. A.J. Smith took over the reigns and, according to everything that's been written about it since, drafted according to Butler's plan instead of trying to install his own in just a few days. The lack of control showed itself when the Chargers took two CBs and a Safety with their first three picks. Smith's keen scouting eye showed up in later rounds, when he was able to grab Pro Bowlers Mike Scifres and Hanik Milligan. Probably the best move of the entire draft came after the draft, when A.J. Smith signed an undrafted free agent who was passing up a potential NBA career for a chance to play TE in San Diego.

I tell this story because, when I think of A.J. Smith, I take out that 2003 season. Did he find some gems in the draft? Yes. Did he find some gems as undrafted free agents? Yes. Would he have signed David Boston to a 7-year deal? I don't think so. Would he have used his first two picks on cornerbacks? I can't imagine he would (especially not since Jammer was drafted with the first pick of the previous draft). So the 2003 team went 4-12, David Boston never got on the same page with Brees (or Schottenheimer) and the Chargers were once again given the #1 pick in the draft. It was like Smith was given a chance to show what he had learned from Butler.

(Smith was also able to get rid of the David Boston headache, trading him to the Dolphins for a sixth-round draft pick just a few weeks before Boston tested positive for steroids.)

You know the rest. Eli Manning for Philip Rivers, Nate Kaeding and Shawne Merriman. The countless drafted players that seemingly came out of nowhere to be stars (Shaun Phillips, Michael Turner, Darren Sproles, etc.). The even more numerous undrafted free agents that turned into major contributors on the team. The surly attitude towards players and media. The desire to build almost entirely through the draft, ignoring almost all free agents.

I judge a lot of head coaches by the record. There's some fairness to that, but in reality a coach can only work with the players he's given. A record is a representative of how good the coach and the GM are together, and if you're looking at them separately it's a beter barometer for how good the GM is than how good the coach is. When you take out that 2003 season, in which A.J. Smith was just trying to keep the ship afloat, the Chargers regular season record with Smith as GM is 67-29. That means that for every loss under A.J., the team has won at least twice.

I've said this before and I'll continue to believe it. Championships and playoff success have more to do with luck than anything else. The teams that win the most championships are not the ones that perform the best in the playoffs, but rather the ones that get to the playoffs the most (and give themselves the best chance to get lucky). The way to build a championship team is to build a consistently good team, one that will be in the playoffs on a yearly basis. That type of consistency starts at the top, and there's only a handful of teams with a leader at top that is as good as A.J. Smith.