Everyone knows I have an affinity for Charlie Whitehurst, but few know why.  My reasons are fairly simple.  It started in college, where Charlie was inconsistent but could take over games with his arm or legs.  He won big games, seemed to always be fired up (similar to how Tebow and Philip Rivers act on the field) and looked like he hated losing a thousand times more than he liked winning.  I love players like that and, in my mind, Charlie was Tim Tebow (before the world fell in love with Tebow), just with less of a surrounding cast.

I was quite excited when Whitehurst was drafted by the Chargers in the 3rd round (81st overall) of the 2006 NFL Draft.  I didn't think he was going to come up and subplant Rivers as the starter, but I had high hopes of Whitehurst become a great backup QB and occasionally doing things like running end-arounds for TDs.  Turns out, Chuck was a wise investment.  Here's why Tebow should be picked, as an equal or greater investment:

1. The Precedant.  Like I said, Tebow reminds me of Whitehurst.  A great leader, a winner and a great option as your backup QB.  Both players faced questions about being to have success at the NFL level.  It's slightly different, because Tebow was perfectly built in Florida's not-at-all-pro offense and teams worry if he'd every be able to take a snap, drop back and throw an accurate pass.  Whitehurst had proven that he could do that, sometimes, but needed more consistentcy.  I still think it would be a similar move if the Chargers added Tebow to their draft class.

2. The Value.  I probably should have said this earlier, but I do not want the Chargers to use their first round pick on Tebow.  I don't even want them to use their second round pick on him.  This whole post is an argument for the Chargers to use their 3rd round pick (which I believe would be somewhere around #90 overall) on Tebow.  That would be slightly lower than where Whitehurst was taken, and if all else fails we could turn around in 4 years and turn Tebow into an excellent package of draft picks.  Heck, with his built-in fanbase the Chargers could probably turn him into a first-rounder with a few good preseason showing.

3. The Backup QB.  We all know that Billy Volek is one of the best backup QBs in the league.  Did you also know he is 33 years old?  Probably doesn't matter much for a backup QB, but it does matter for a guy that always wishes he had his chance to start in the NFL somewhere.  Did you also know that his contract is up after this season?  Similar to Charlie going to Seattle to possibly be a starter, there will be teams offering Volek the starting job (or at least a shot at it) if he leaves San Diego in 2011.  I wouldn't be surprised, or offended, if he took one and left.  However, without a QB waiting in the wings as the 3rd QB, that could leave the Chargers in a lurch.

4. The Friend (aka The Competitor).  This is a little-known secret that GMs don't talk about much publicly, but plenty privately.  If you can get the star player on your team to become very good friends with another, much-easier-to-keep player on the team, contract negotiations will be much simpler.  I know Rivers is locked up for a while, but it should still play into the minds of the front office guys to pounce on the chance to get somebody that Rivers might enjoy playing/working with.  Now consider the similarities between Rivers and Tebow:

5. The Locker Room Anti-Cancer.  Let's not beat around the bush, A.J. Smith hates guys that creatr trouble off the field.  He doesn't like signing them to contracts, and he doesn't like them in his locker room.  This is why, when there may have been better options, he's done everything he could to secure the smart/safe/secure players like Jacob Hester and Eric Weddle.  Tim Tebow is guaranteed to be a great influence in the locker room and a good citizen once he goes home.  That's going to entice Mr. Smith to at least consider this possibility.

6. Big Game Experience. Do I even need to go into details?  The Chargers GM has shown an affinity for players that play for more than just 2 years.  Rivers was a 4 year starter and I believe Whitehurst started about 3.5 of his 4 seasons in college.  Tebow was a 4 year starter at Florida, winning two championships and playing in the league's toughest division.  A case could be made that no QB in the history of the NFL Draft was coming to the table with more "big game experience".  There's little concern about Tebow "freaking out" if he ever gets thrown into a pressured NFL situation.

So there you go.  An undeniable case for the Chargers to reserve their 3rd round pick for Tebow.  As far as the Chargers go, I think he passes every test they have for that empty 3rd QB role (that may need to be the 2nd QB next season).  As far as BFTB goes, there's only one more test.  How does he look with some hair and a beard? 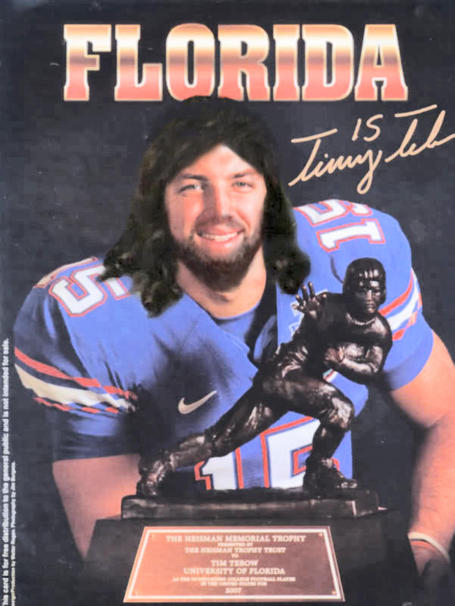