Share All sharing options for: 5 Bad Things: Chargers at Texans

The Head Coach has issues with some of the in game managerial issues. The biggest pet peeve that many have with Turner is his use of timeouts. There were questions last postseason in the game against the Jets and there were questions last Sunday. At the end of the first half, just after the 2 minutes warning, the Texans converted a 3rd down to make it 1st and goal.

At this point, after this set of downs, the Texans are either going to score a touchdown, kick a field goal or turn the ball over. The Texans have plenty of time to do any of these so there's no point in hoping that the clock will run out on them. Also, the Texans are going to get the ball back to start the 2nd half and they will be doing it up by at least 3 points and maybe more. The Chargers have one of the best offenses and are facing a poor NFL defense.

\WHY NOT USE TIMEOUTS AND SAVE TIME FOR THE OFFENSE TO DO SOMETHING BEFORE THE HALF?!?!?

Instead the Chargers got the ball back with 15 seconds remaining, all their timeouts, bad field position and reasonably kneeled the ball. But, they could have had much more time. Now, I'm not saying that you save most of that 2 minutes, but at least leave more than 15 seconds. 45 seconds is probably enough to try to get in FG range and not leave much time for the Texans to do something if you're forced to punt.

There are probably a couple of other quibbles in the game too. They could have gone for it on 4th and 5 in the second quarter instead of punting and letting the Texans just get back to where the Chargers punted from in two plays. I could argue that they should have gone for two instead of kicking the extra point to go down 23-21 (it's no so much that they should have gone for it, but I wonder if Norv even considered it). And the playcalling on the first drive was vanilla, predictable and backed the Chargers up to a situation where they got another punt blocked.

2. This space reserved for: Special Teams

How much you wanna bet that Special Teams is on the 5 Bad Things list for the rest of the season? I don't care if Steve Crosby stays or gets fired, I'm willing to bet that it will remain a problem. Even if you took away the Hester out of bounds play, the "tipped" punt and the illegal low block that plagued the special teams to start the game, the rest of the game was not a quality performance. That's not to say that I wouldn't take a "non-quality performance" over the abysmal piece of... trash that we see week in and week out, but just that nothing of quality happens on that unit. Here's the starting position for each of the kickoffs: 26, 32, 27, 26 and 28. By comparison the Chargers started at the 4, 22, 20, 20, 27, 26. A subtle difference, but its not like the Texans have a great track record on ST to begin with. 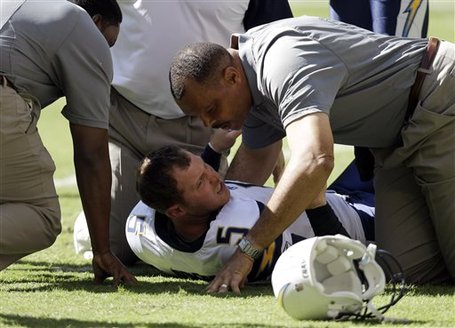 The Chargers finished at -1 in this area. Ryan Mathews fumbled away one, Philip Rivers threw an interception when the pass rush kept him from stepping into a throw and Paul Oliver picked off the final Matt Schaub pass to clinch the game. Of course, that's just what traditional stats will say. The "tipped" punt was basically a turnover (really all punts are turnovers, but they are strategic turnovers). The Chargers two 4th down stops were turnovers in the non-traditional sense. Adding that up you get back to +0 (or -0 or something). That's not winning the turnover battle in any way shape or form. However, the Chargers did at least force a fumble on defense, but the Chargers fumble luck determined that a Texans player would land on it. Sigh.

4. The Pass Rush (or lack thereof)

Antwan Barnes gave us some hope for a few games and Shaun Phillips had an impact early on, but the pressure just wasn't there for the second week in a row. The Chargers did end up with 2 sacks, but in my opinion those were coverage sacks. Both were a case where Schaub had plenty of time to throw, but didn't find anyone and held onto the ball too long. Matt Schaub is probably the best QB the team has faced all season and normally a pass rush is a necessity in beating such QBs, but the Chargers were fortunate. The Chargers can be very thankful for the following: Arian Foster dropping a TD pass that was determined via replay review, Matt Schaub suffering an injury that forced many of his throws to be off target including many in the 4th quarter, a poor decision by Schaub to try a QB sneak on 4th and 2 and Andre Johnson uncharacteristically dropping a pass that resulted in a Paul Oliver interception. It ain't Thanksgiving yet, but we should keep a list of these things so we can bring them up on Turkey Day.

Below I have a widget with his game stats, but that doesn't tell the whole story. Mathews had the ball stripped away from him again and the team just cannot afford to have their top RB losing the football this much. He also had to leave the game with an injury. The biggest concern with Mathews coming out of college was his injury history. So far he hasn't suffered a big time injury, which people were worried about with his knee, but these type of injuries are almost worse. If you can't rely on a player to stay on the field for the whole game, then he becomes a problem. This is what happened to Merriman. You couldn't IR him and you couldn't keep him active. That's not to say we're at that point yet, but it's rather worrisome. Maybe I'm overreacting.