Share All sharing options for: 5 Good Things: Broncos at Chargers

Random Note: If you haven't yet seen the video of Hermano del Capitan, you should take a look.

I finally bought in last night. All season I've been saying "You can't put Philip in the MVP discussion, because the Chargers aren't even .500!" Well, not only did the team get to .500 last night, but I finally started feeling like I was watching a player have an MVP season.

Say what you want about his throwing motion or attitude, but if you want to try to convince me that Rivers is not as good as Peyton Manning, Tom Brady or Drew Brees.....I'm going to be convinced that you don't know football. He's at that level, and getting better every week despite the fact that his receivers are dropping like flies. Think about this for a second.....compare last night's team to last year's team, and the Chargers were only missing the #1, #2 and #4 receivers (Antonio Gates, Vincent Jackson, Legedu Naanee) along with their #1 RB (LaDainian Tomlinson last year, Ryan Mathews this year). If half of those guys can come back healthy for the game on Sunday, it's a big advantage.

If I'm making my own little ranking list of MVP candidates, here is how it looks....

1. Philip Rivers
2. Michael Vick (although now that the world knows he can't throw when running right I suspect he'll have a rough second-half to the season)
3. Tom Brady
4. Arian Foster 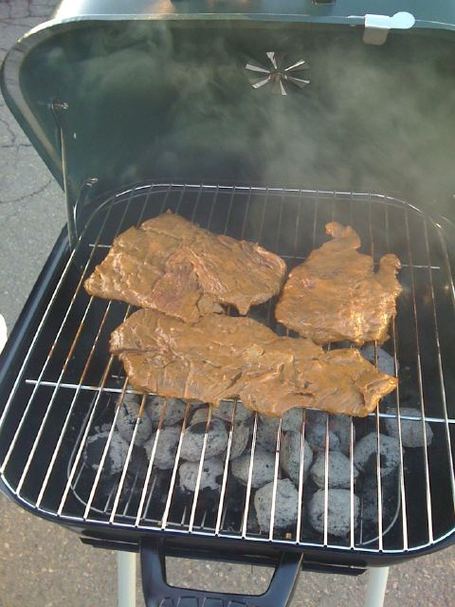 A tip of the cap goes to creanium, BFTB's newly-appointed tailgate chef, for coming through with some delicious food that made me want to take a nap in my car pre-game.

I have witnesses to the story I am about to tell, and I suppose I've already sortof told it in the Shaun Phillips post earlier...but stick with me. After that first drive by the Broncos, the one where they had six consecutive plays of 8 or more hards and went right through the Chargers defense like a hot knife through butter, both creanium and Richard Wade (who was texting me, when I was able to get service) expressed some worry. I did not. And here's why...

On that first drive, I was watching two things. One, I was watching how the CBs were playing the WRs (about 10 yards off). What it looked like, to me, was that the Chargers were trying to figure out how they were going to attack the Broncos offensive line and rush the passer, and wanted to make sure they didn't give up any big plays early. The other thing I was watching was the pass-rush, which seemed like it was having a pretty easy time getting into the backfield....but was lat because Orton was getting the ball out quickly.

After seeing this, I thought to myself "Well, this is easy. Put the CBs on the line of scrimmage and bring the heat, it'll result in interceptions, rushed throws, incompletions and lots of check-down passes." That's exactly what Rivera called for, and the Broncos didn't have an answer for it. They couldn't protect Orton long enough to get anything going downfield, and Quentin Jammer and Antoine Cason made sure to make tackles (and plays) whenever their receiver was thrown to.

Doesn't this always seem to happen? Star player is out, the person filling in for him is playing well enough that the question of "Should we bench him?" has to be raised and thought about, and then right when star player is coming back his replacement gets injured. It's incredibly how many times this has happened in the NFL just over the last few seasons.

Patrick Crayton showed again last night that he is not only an excellent WR, but that he fits in with this offense and QB perfectly. If he is smart, he'll try and negotiate a long-term deal to stay in San Dieog (and with Rivers) this offseason.

It seems like no matter who is missing, Crayton is out there picking up the slack. No Jackson? Let's do this. No Floyd? No problem. No Naanee? We'll manage. No Gates? Crayton's your guy. Last night was Patrick's fifth consecutive game with at least 3 catches and his second 100+ yard game of the season. He even showcased his skills as a QB, throwing an incomplete pass downfield.

The news today is that, because of his wrist injury, Crayton will be out for the next two weeks. This probably means that Jackson (who has been practicing more than Naanee) gets one of the starting jobs next week.

Let me start with a funny stat. You know how Antonio Cromartie couldn't do anything but catch the occasional interception, yet everyone was so worried about the "drop-off" from him to Cason? Guess how many interceptions Cason has in 2010. You're correct! He has 3. Guess how many Cromartie had in 2009. Yes! Also 3!

Now here's where things get even better. Remember all that talk about how good Cromartie was going to be with the Jets, because they were going to utilize him and put him in a position to break all sorts of interception records? Of course you do. Guess how many interceptions "the Shawn Kemp of football" has this season. Did you guess "Less than Cason"? If you did, you are a big winner (the answer is 2).

Should we go into tackles as well? Okay, but very briefly....

So, people that came up to me in the offseason and said "A.J. Smith is going to regret giving away Cromartie and Tomlinson".....what's up? Oh, you still think Tomlinson is killing it in NY? Yeah, about that.....

This is a what-have-you-done-for-me-lately league, and the answer to "What has Tomlinson done in the last month?" is pretty much nothing.

Anyways, back to Cason for a minute. Like most first-time starters, after bursting out of the gate quickly Antoine had a few rough games in the middle of the season. However, it would appear that he has recovered nicely and has had two strong games in a row against the Broncos and Texans potent passing attacks.