Share All sharing options for: Tailgating Basics: Getting Started

Hey guys, miss me? Some of you may have (or may have not) noticed my absence lately. Well, I was generally consumed with my wedding plans, and subsequent marriage and honeymoon.

With that all behind me now, I’m back and contributing to the greatest Chargers community on earth.

What better way to get back into the swing of things than to talk about tailgating and tailgate food. I’m not going to try and get all cute with you this week and giving you a Thanksgiving-themed tailgate recipe. Nope, instead, I’m going to cover the basics.

John and I are going to Monday night’s game against the Broncos, and we’ll be tailgating. I do happen to have a grill at home, but it’s a behemoth, and won’t fit in my little itty-bitty compact car. I don’t have quick access to a pickup truck, so I’m going to pick something up that’s a little more portable.

For tailgating, I want something I can quickly throw in my car and take down to the stadium. I also don’t want to worry about it should we get a little, ummm, careless, with the lighter fluid and end up setting fire to the entire thing. Your local home improvement store should carry small kettle-style charcoal grills for around $30; yep, that’ll be perfect.

We’ll also need some charcoal briquettes. Maybe it’s best if we don’t have dangerously flammable liquids nearby when we’ll be drinking and having open flames. Yeah, probably should pick up some charcoal that’s already soaked in lighter fluid; it’ll be safer for all involved that way.

Never, ever, forget your hardware. You’ll need, at the very least, a spatula to flip your burgers, and a pair of tongs for the hot dogs or brats. Also, since the grill is basically just a specialized stove, you could even bring a skillet and heat it up on the grill. This will allow you to do things like make some crispy bacon for some bacon cheese burgers. Because really, who likes soggy bacon? Not this guy.

Also, more important than any of that, is a fire-starting utensil. I tend to like those long lighters, allows me to get down into the coals without completely obliterating my hand (and eyebrows).

Making some bacon cheeseburgers is actually not a bad idea. Let’s go with that, I think that will be a delicious way to get fueled up for the game.

For this we’ll need some burgers. I tend to like the frozen burgers you can get at Costco. They’re cheap, delicious, and easy. Usually at home I’ll make my own burgers from ground beef, but we’re going for convenience here.

You’ll also want to pick up a pound of bacon, some cheese slices (whichever variety is to your liking), buns, and any condiments you want on your burger.

Let’s also take along some salt, pepper, garlic powder, and paprika. More on those in a bit. 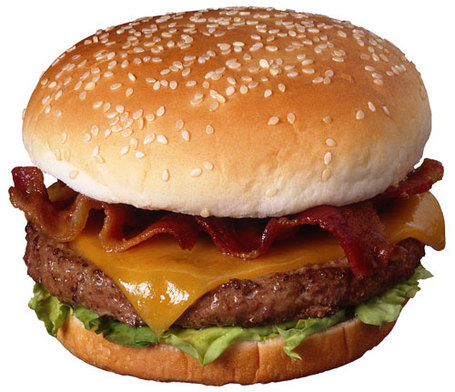 Well, now we have all the hardware we need, getting things started is super simple. Dump your briquettes into the bottom of the grill (you did remember to remove the cooking grate first, right?) Once the briquettes are in a nice even pile, put the grate back on. Since they’re already soaked in lighter fluid, the briquettes should light very easily. Take your fire-starting utensil, reach down close to the briquettes, and fire away.

Go ahead and let those coals burn and burn until there’s a nice layer of gray ash covering them; it should take about 15 minutes. Once the fire has burned out and you just have a nice warm glow, go ahead and put that skillet on the grate to get warmed up. Give that skillet about 5 more minutes to warm up.

Once everything is up to temperature, place those bacon slices on the skillet, and then slap the burgers on the grill. This will take a little while, so go ahead and cover grill.

After about 4-5 minutes, check on those delicious meats. Your bacon should just now start to be sizzling, and the burgers will just now begin so show signs of getting juicy. Now’s the perfect time to sprinkle on a little salt, pepper and garlic powder, and give each patty just a pinch of paprika. Check on the bacon and if all is well, go ahead and cover everything back up.

Give it another 3-4 minutes, then take cover off and look at those burgers. I like to wait until there’s a little pool of blood at the top of the patty before flipping. This ensures optimum flavor and cooking evenness. If the patties look ready to flip, by all means, flip those bad boys over. Season the other side of the patties just as you did the first side.

Check on that bacon, it should be ready to flip as well. Turn it over and let it sizzle. Once you’re happy with all the meat for now, cover it all back up. Give it about another 4-5 minutes.

Now it’s time for some cheese. But first, we want to toast up our buns. Take your buns and split them and lay them down on the grill. They’ll toast up nicely that way. Now, take your cheese slices and lay them out on the patties. Cover it up again for about 60 seconds, just long enough to melt the cheese and toast up the buns.

Take the cover off again, and it’s time to eat! Dress up your buns however you’d like. Me? I like my buns plain, just the burger, cheese and bacon. Damn, I’m drooling just thinking about it now.