Alright, that was a fun day.  I hope everyone, including Kevin, had a good laugh.  If I remember to do Kevin Acee Day next year, I'll try to get Kevin a little more involved.  I'm hoping that sometime between now and then, I can get Kevin to do something or say something foolish (while drunk?) that will be as much fun to read over and over again as the e-mail I'm about to present to you.

Truth be told, I didn't get a ton of e-mails with stories about Kevin.  I'm sure some of that has to do with a lot of Chargers fans just ignoring all things Chargers (including this site) for the sake of their sanity right now.  The ones I did get were pretty much what you'd expect ("I saw Kevin in the store and he was really nice.").  I was going to post them all, until I got one from Annie.  Yes, the Annie who shares with Kevin the sdutChargers Twitter.  The same one that does the pre-game videos in the parking lot of games, and gets thrown under the bus by Kevin on a regular basis in his videos.

Kevin Acee will probably kill me for writing about him. I mean, he might REALLY kill me. He hates when I say this sort of praise. But the Chargers season has ended and I'm somewhat unemployed, so ... why not?!!

As the Chargers Multimedia Reporter for The San Diego Union-Tribune, I had the pleasure of working with Mr. Acee nearly every day for the past six months. The first thing I can tell you is that Kevin Acee is the hardest working person I've ever met. The guy covers the beat like white on rice. People are quick to judge him, but they don't see the countless hours he puts in at Chargers Park, meticulously checking facts and researching; they don't see the family time he sacrifices to make sure he gets the story; they don't see the personal relationships he's built with the players over the past five years or so. The bulk of Kevin's work is what you DON'T see. It's what happens in the locker room, in meetings, in off-the-record conversations with players or when he's watching film, something most beat writers don't do. It's the behind the scenes stuff that really makes him so impressive. It's why players and personnel respect him. It's why he's able to get the story first and also get the story right.

Being a sports journalist is an art form. It reminds me of that one song ... you know ..."You've got to know when to hold 'em, know when to fold 'em" ... It's true. It's a chess match. You've got to know what to keep, what to save, what to use later. You've got to nurture relationships and egos. You've got to report facts and resist the urge to sensationalize. Kevin does just that. You might not always LIKE what he writes. That's okay. He doesn't expect you to. But you've got to respect the nature of his job. We always get a good giggle out of the people who "blame" sports reporters for a team's loss, or for a player leaving town. Ummm ... that's giving a reporter WAY too much credit, peeps. ;)

This year, like BFTB mentioned in its article, Kevin was asked to write, blog, tweet, video, produce, host ... I'm sure I'm missing something. The role of the journalist is changing. Instead of print, he's multimedia. The guy wakes up at 4 a.m. on the road, takes the 6 a.m. flight, gets to the presser at noon, blogs, tweets, goes on the radio, writes two stories, does a video report, makes a TV appearance and then answers Mailbag questions to "wind down" before passing out. It's amazing he's not addicted to Red Bull. And he doesn't once complain. He knows he has a great job. But I'm just sayin' ... I get exhausted watching him sometimes.

I've got too many funny stories to tell, and I've got to keep my job for next season, so I won't give away any "embarrassing" tales. But I'll leave you with a few fun facts: 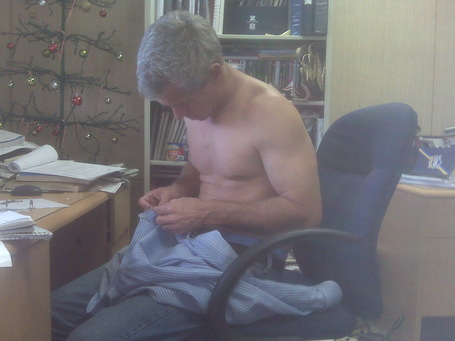 KA loves Mountain Dew. He sometimes listens to classical music when he writes. He knows how to sew (for evidence, see the picture above of him sewing a button on his shirt). He says things like: "Good golly, woman!" when I'm taking forever to set up the camera. He gets mistaken for Anderson Cooper on the road all the time. What else ... hmmm ... oh yeah. He dresses better than I do.

(By the way -- If I send out an S.O.S over Twitter, it's because he's coming after me for writing all this. Keep watch!)

Don't worry Annie, your message is out there.  He can't do anything now without avoiding being the #1 suspect.  That should at least keep you alive until next season.  Also, I think he dresses better than all of us.

It's been a blast, kids.  Kevin hasn't yet shown up to comment, but the day is still young.  Perhaps this e-mail from Annie will force him to show up and fire back.  Even if he doesn't though, consider yourself lucky to have a guy like Kevin covering your favorite football team.

Zach will be here in a couple of hours to present a song he wrote in honor of Kevin Acee....for Kevin Acee Day.  I'll be in the wind.