Share All sharing options for: Game Preview: Redskins at Chargers

I'm not going to pretend that this game is serious.  It's not.  Things will be different in this week's Game Preview.  For instance....a look ahead:

The Chargers opponents for 2010 have been chosen/announced.  They will travel to play the Bengals, Colts, Texans, Rams and Seahawks (in addition to the AFC West opponents).  That's at least 2-3, right?  Add in (probable) wins against the Chiefs in KC and the Raiders in OAK and you're at 4-4.  That's the worst-case scenario in my head.

Visiting sunny San Diego in 2010 will be the Cardinals, Patriots, Jaguars, 49ers, Titans and again the AFC West crowd.  Again, worst-case scenario in my head is 2-1 against divisional opponents and probably 2-3 against the rest.  That means if absolutely everything goes wrong with the season (i.e. Philip Rivers' goes down for the season in the preseason), this team still has a great chance of finishing above .500.

I don't love the idea of playing the Patriots and Colts in the same season, but what are you gonna do?  When you win your division, the following year you have to play other division winners (which is why we get the Bengals and Patriots).  At the very least, the Chargers play the Patriots in SD (NE has been an awful road team in 2009).  Also, something tells me the Bengals and Cardinals will not be very good next year.  Call it intuition.

Anyways, enough of living in the future.  Let's go back to the near-future and preview this week's game. 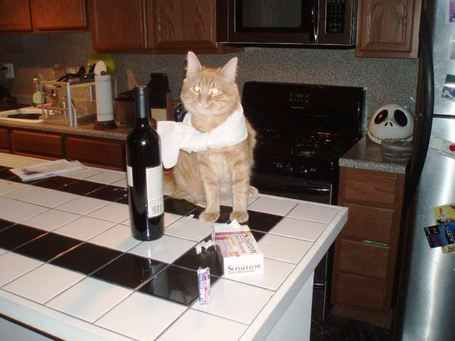 I'd like you all to meet my cat.  His name is Sprunk (it's a long story).  He's spends 1/3 of all of his time trying to kill me.  The rest of his time is spent smashing his face into my face (I'm pretty sure that means he wants something from me) and sleeping.

You see, my wife and I got Sprunk when I first moved out to Philadelphia and he was really young.  So young that a more responsible pet store probably wouldn't have sold him to us.  He was our only pet for a year before we bought another cat.  Yet even after bringing home a "little brother" for Sprunk to play with, he's incredibly attached to both me and my wife.  This means whatever room we're in, he's in.  When I go downstairs to get something, he goes down too....and nobody bothered to teach this cat anything about personal space.  9 out of every 10 trips downstairs results in me half-slipping and coming a half-inch away from tripping over this cat, who needs to be around my feet at all times, which would definitely result in me tumbling down the wooden stairs (hitting my head on the brick wall right next to them) to my death.

I know what you're saying.  Why don't I take a few steps, then stop and let the cat go down by himself before continuing down?  Because he's a cat spawned from hell, and when I stop he stops.  If I can stop quickly and quietly enough for him to get a few steps in front of me, he will literally turn around and come back up around my feet.

I'm convinced that one day this cat will either kill me, via the stairs, or smother me to death while I'm sleeping.  So what do I do?  I hold onto the railing with one hand and place my other hand against the brick wall.  Sometimes I go down the steps sideways so that I can get my entire foot on each step (more balance!) and I sure-as-hell never go down those stairs at night without a light on.  In short, I act as if those stairs are covered in ice and my feet are covered in butter.  It's the only way I know I'll make it another day.

Why am I telling you this story?  Because this is exactly how the Chargers need to play this game.  Do they really need to punch the Redskins in the mouth to win?  No.  Jason Campbell is going to give this game away.  Jim Zorn is not going to motivate anybody, because the locker room gave up on him a long time ago.  The running game would be a minor threat if Washington wasn't on it's 7th starting running back (Note: probably not accurate) this season.  The Redskins don't care about this game, don't want this game and will only show up at Qualcomm Stadium to collect their game check.

The Chargers need to play this game like the field is covered in ice and their cleats are dripping in butter.  Everyone: starters, backups and especially Buster Davis....DO NOT GET INJURED.  Hold onto the man next to you if you have to.  If the team loses the game, nobody cares.  However, if somebody gets hurt the Chargers fans will absolutely lose their minds.  Stay healthy, fellas.

When the Redskins Have the Ball

I don't get why people are still worried about the Chargers defense.  Here's a list of potential playoff teams that give up the same or more points per game than San Diego:

The Giants and Falcons would be on that list if they weren't eliminated in the past few weeks.  Even the Redskins, who I think have had an underrated defense all season, give up almost a full point more per game than the Chargers.  Why is everybody so quick to praise the Vikings, Eagles, Jaguars and Saints for their defense and then criticize the Chargers for theirs in the next sentence?

I understand that San Diego's run defense isn't going to shut anybody out on it's own.  I also understand that the pass-rush has been sporadic all season and really struggles against good offensive lines.  However, I have been saying for years that the Eagles are the best team in the league with a lead.  It allowed Jim Johnson to be more aggressive with his blitzing and it also forced the opposing offense to try to throw the ball (which played right into the hands of a strong Philadelphia secondary).  Ron Rivera, who was an assistant under Jim Johnson for four seasons, has turned the Chargers' D into the same thing.

The Eagles rode that strategy to a bunch of NFC Championship games and eventually a Super Bowl appearance (that they probably should've won).  They might do it again this year.  If your offense is strong enough, and consistent enough, you can get by on a defense made up of nothing but smart safeties, good corners and a heck of a lot of blitzes.

Because of the similarities between the two teams, I am as worried about the Chargers defense as an Eagles fan is about the Eagles defense (which is to say, not very much at all).  If the Chargers lose a game in the playoffs, it's more likely to be because the offense could not score points and put the pressure on the other team than because the defense couldn't stop giving up 4 yard runs.

If you've been reading BFTB for more than a few weeks, you've no doubt seen me bring up the final game of the 2004 season.  The Chargers had clinched and had nothing to lose by playing their backups, and so Charger fans were introduce to the awesomeness that was Philip Rivers, Malcom Floyd and Michael Turner (as well as a handful of other players that never amounted to much).  This game will be great to watch in the first half, to see how well the starters can play when there is seemingly nothing to gain, but even more fun to watch in the second half because of the following players:

A big game by any of those guys and they not only pop up on A.J. Smith's plans for the future of the organization, but they pop into Norv's mind (and Ron Rivera's) as he gameplans for the Chargers' first playoff game.  Also, as unknown players are prone to do, any of these guys could become fan-favorites overnight.