Share All sharing options for: Chargers By The (Jersey) Number: #25

Blah.  I'm not going to lie, this crop is nothing to write home about.  Even so, the players need to be tackled and investigated.  I wouldn't be surprised if this one came down to a vote simply because nobody is good enough to beat out the rest of the field based on what he's done on the field.  Ready?  Let's go. 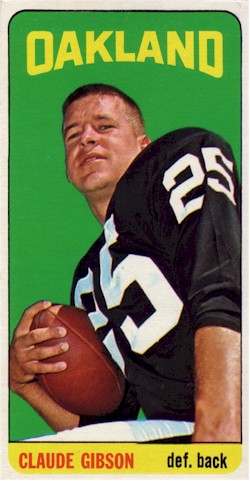 Claude "Hoot" Gibson, CB/PR.  Back when the game of football was played by the best possible players at all time, meaning a lot of two-way playing, Hoot was still looked at with awe.  Playing at NC State, Gibson was a defensive back, receiver, return man and halfback.  In his first three seasons, Gibson rarely came out of a ballgame.  He led the Pack in punt returns in 1958 and 1960, kickoff returns in ’59 and interceptions in 1960 with four.  He provided crucial rushing and receiving yards whenever needed.  He played his entire senior season with a broken hand and wrist.  Gibson concluded his senior year by playing in four post-season all-star games — Senior Bowl, Copper Bowl, Coaches All-America Bowl and the Chicago All-Star Game.  Long story short, Hoot never ran out of gas.

Claude was drafted by both the Bears (NFL) and Chargers (AFL) and decided to come to sunny San Diego.  In his two seasons with the Bolts, he was impressive as a punt returner (14.9 Yds/PR in 1961), kick returner (27.5 Yds/KR in 1962) and cornerback (13 INTs, 1 TD).  Following the crushing loss to the Oilers in the 1961 AFL Championship, Gibson was traded to the Oakland Raiders.  He excelled as a punt returner with the Raiders, but rarely returned kicks and was only average as a cornerback.  Hoot still owns the third best punt return average of all professional football players with 75 or more punt returns.  He returned 110 punts for 1,381 yards during his career for a 12.1 average and scored three punt return touchdowns. 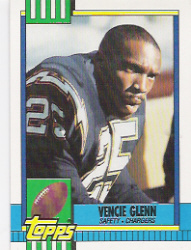 Vencie Glenn, FS.  Vencie was a good, but not great, Free Safety in the 80s and 90s.  He was drafted by the Patriots, but never saw the field with them.  He finished his rookie season as the starter in San Diego and followed it up with four strong seasons.  In less than 5 seasons with the Bolts, Glenn picked off 12 passes, recovered 6 fumbles and collected 311 tackles.  He scored two defensive touchdowns, one on a 103 yard interception return and the other on a fumble return.

In 1990, with the Chargers coming off a down year, Glenn left town and signed with the Saints.  In the last 5 years of his career, he never finished with less than 4 interceptions.  His finest season may have been his final season, playing with the New York Giants.  He had 5 interceptions (1 TD), 3 forced fumbles, 2 fumble recoveries and collected 85 tackles. 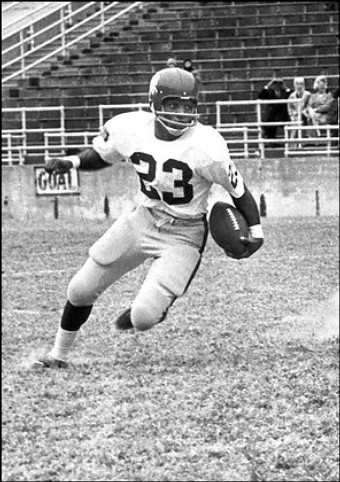 Jerry LeVias, WR/KR.  Jerry has a story that's too long to go into here.  To try and sum it up, he was a great player who had a lot to do with breaking racial barriers in the Southwest Conference by playing at Southern Methodist University.  He is a civil rights pioneer comparable to Jackie Robinson and, like Mr. Robinson, he survived and excelled only because he was such an incredible talent.  His abilities on the football field transcended color to SMU's fans and eventually to the rest of that historically white conference.

Jerry was on the All-SWC team three times and was an All-American as a senior.  He twice led the league in receiving and held every career record when his three varsity seasons ended, including the single game mark for reception yardage (when he caught 8 passes for 213 yards against North Carolina State in 1968.)  LeVias ended his career with a TD catch in SMU's scintillating victory over the Oklahoma Sooners in the 1968 Bluebonnet Bowl and followed that as the MVP of the Senior Bowl.  On top of these achievements on the field, LeVias was an Academic All-American his senior year.

LeVias was drafted by the Houston Oilers and spent two seasons with them.  He was responsible for almost half of the Oilers' yardage in 1970 and went to the Pro Bowl as a rookie in 1969.  After coming over to San Diego he remained and electrifying player, but struggled with injuries and missed most of the 1972 season.  As a Charger he had a 6.5 Yds/Ret average on punts and 22.5 Yds/Ret average on kick returns.  He also caught 61 passes for 914 yards and 2 receiving touchdowns.

The physicality of the pro game eventually wore on LeVias, who famously remarked, "As the season progresses I get lighter, faster and more afraid."  Well versed in avoiding the measuring tape as well as bigger defensive players, one scout claimed to have measured LeVias at 5'8" 163.  The pro game eventually became unappealing to LeVias, who already prepared for life after football, working for the Conoco oil company and having a partnership in a Houston men's clothing store even while playing.  After his career ended, LeVias became a successful businessman.