Chargers By The (Jersey) Numbers: #24

Share All sharing options for: Chargers By The (Jersey) Numbers: #24

Sorry if I can't give every San Diego Chargers player who has ever worn #24 their due, but I'm busy and there are a ton of them.  Eighteen to be exact and it's not a group that's particularly strong in terms of talent or at least career performance.  The full list and nominees are after the jump. 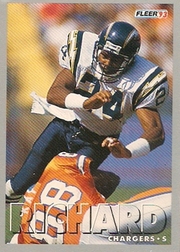 Stanley Richard, FS. "The Sheriff" was a good player who, not unlike most of his teammates, had a career year in 1994 to help the Chargers in their run to the Super Bowl.  In that season he matched or exceeded his career highs in interceptions (4), touchdowns (2) and forced fumbles (1).  That season he also collected 79 tackles and returned one of his interceptions for a 99 yard touchdown (the longest interception return of his career by more than 50 yards).  Following the Super Bowl run, Richard signed with the Washington Redskins and continued to be what he was.  He was a healthy, consistent free safety in both San Diego and Washington.  That's a tough position to stay healthy and consistent. 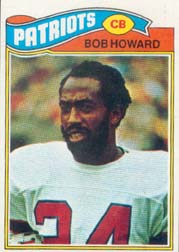 Bob Howard, CB. Howard started playing college ball at Cal Poly SLO and was good enough to transfer and earn a starting spot at SDSU, a team that happened to be coached by Don Coryell.  In 1967, the Chargers took Howard in the second round of the AFL/NFL Draft.  He spent his first 8 seasons with the Bolts, intercepting 21 passes and recovering 9 fumbles during that time.

Similar to Stanley Richard, Bob Howard built a reputation for consistency.  He stayed on the field and he delivered good numbers.  Neither player made a Pro Bowl or won an MVP award.  One player doesn't stand over all of the others that have worn #24.  However, I'm giving this one to Howard because he spent twice as much time in San Diego as did Richard.  Also, although it shouldn't count...the fact that he played for Coryell and at SDSU helped him a bit.  Unfortunately, Howard died last year at the age of 63.  He left behind his wife, Barbara, and his three children.

Your winner, and somebody who proved that consistency and hard work is just as good as talent, Bob Howard.