Share All sharing options for: The Kris Dielman Story

We all probably know who Kris Dielman is.  Even though he is an offensive lineman, any San Diego Chargers fan has heard of the team's perennial Pro Bowl Left Guard.  Maybe you first heard of him when he earned his first of two consecutive trips to the Pro Bowl, or maybe you heard of him when he signed his big contract a few years back.  He plays one of the most important positions on the offensive line for the running game.  Left Guard is to the running game what Left Tackle is to the passing game.  You may remember how Shaun Alexander's (the RB for the Seahawks) career seemed to come to an abrupt stop a few years ago.  It was universally attributed to his age.  Coincidentally, it also happened the same year Seattle's Pro Bowl Left Guard Steve Hutchinson left for Minnesota.  Minnesota's rushing game quickly became one of the most dominant in the league.  Left Guard is an important position and the Chargers have one of the best in the business.

I was listening to an interview of Kris on XX 1090 Sports (mp3) where Kris gave a rough overview of his career since High School.  It was such an amazing story, I thought I should summarize it here.  So click through to read the rest...

Kris was an all-state Linebacker and Tight End in high school in Troy, Ohio.  Despite being all state in a big football state, Kris was only recruited by MAC schools and Indiana.  Since Indiana was in the Big-10, he decided to go there.  If you are familiar with Big-10 football and the history of IU football, you know IU is not really a prestigious football school. 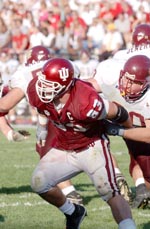 At Indiana, Dielman was recruited to play LB, but was switched to TE in his first year at Indiana where he became a "budding star".  By his sophomore year, Kris was playing both ways, playing tight end and defensive line.  If playing both ways on a Big 10 team sounds a little strange, you have to remember that, as Kris says, "We weren't very good."  Kris actually had a touchdown and sack in the same game, thrown by none other than Antwaan Randle El. (Kris: "And we still lost!  My IU career in summary.").  By his junior year, Kris was playing Defensive Tackle exclusively.  He was team captain his junior and senior years.

Kris was not invited to the combine after his senior year.  He had blown out his ankle in camp his senior year and tried to play through it.  He ended up having surgery after his senior season.  In fact, by this time he had re-thought college and decided to stick around and actually graduate, rather than work out and try to get ready for any tryouts he might get with NFL teams.  Draft day rolls around and Kris is not drafted.  After the draft is over the undrafted free agent frenzy sets in and the Chargers called and said they wanted to sign him to play defensive line.  SD was the only team that called.  Kris packed up his truck and headed out.  He and his agent had cleverly negotiated a signing bonus of $7500 (this was 2003) which paid for his gas and lodging to get to camp. He still has a copy of the check.

Dielman shows up for camp and eventually gets cut in the third week of the pre-season.  He is brought back on the practice squad, and on his way to a Defensive Line meeting is intercepted by Marty Schottenheimer.  Marty takes his defensive playbook away and tells Kris he is now an offensive lineman and directs him to the offensive linemen meeting instead.  Like always, Kris rolled with the punches, thinking "I'll make the most of it."  It wasn't unusual, considering how often he had bounced around positions since high school. 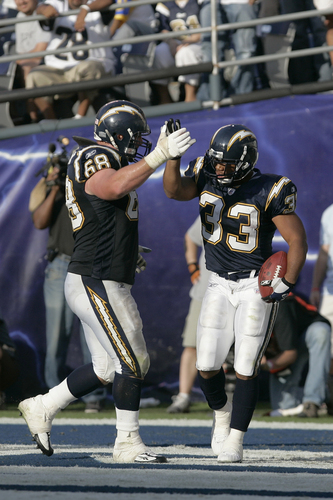 Unfortunately, Kris had been developing bad blood with the OL all camp since he was on the other side of the line.  Now, he is in the same room with them.  They were not real friendly.  Fortunately for him, they all stunk or were busy drinking themselves out of the league.  The Chargers starting offensive line that year was Toniu Fonoti RG, Jason Ball C, Damion McIntosh LT, Kelvin Garmin LG, Courtney Van Buren RT, and Vaugh Parker was hurt.  Give yourself a pat on the back if you remember more than one of those guys.  Fonoti and McIntosh are the only guys who are still in the league.  By Kris's second year Nick Hardwick was drafted and really taught Kris the intricacies of playing offensive line. Mike Goff and Shane Olivea came in that year and the offensive line as we know it started to take shape.  By 2005 Kris was a fill-in starter for Fonoti and has be solid ever since. After the 2006 season, Kris was a free agent and could have signed with Seattle for a boat load of money but decided he wanted to stay in San Diego for a slightly smaller boat load of money.  That was the same off-season that Marty was jettisoned.  Think of how different the Chargers' story might have been the last few years if Kris had left for Seattle.  He was a Pro Bowler in 2007 (and 2008) and an All-Pro last year.  He has come a long way from being cut in the third week of the preseason. 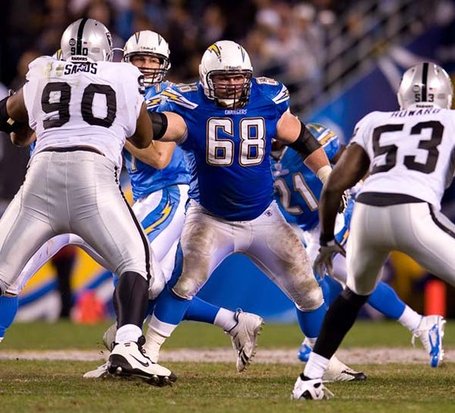 This season, Kris and the rest of the Chargers O-Line are donating $100 each for every rushing TD to the Marine Corps-Law Enforcement Foundation to support the families of fallen heroes.  See here for more info, and look here to join Kris and the OL in donating a fixed amount of money for each rushing TD.