Has Merriman Slipped Since his Steroid Suspension?

Share All sharing options for: Has Merriman Slipped Since his Steroid Suspension?

So I'm listening to Mike Florio of profootballtalk.com being interviewed on one of the local radio stations and he says something that bugs me.  He said that Shawne Merriman hasn't been the same player since he was suspended for steroids back in the middle of the 2006 season.  The implication is that Merriman needs performance enhancing drugs to be the dominant player he has the reputation of being.  Now that he is being tested more often, he isn't able to use performance enhancers and his play has suffered.

What Florio said bugged me because I hadn't noticed any drop off.  Merriman still seemed to be a terror and someone opposing offenses always had to account for.  The sack stats of an edge rusher tend to come in bursts with 0 for two weeks and 3 the next week, so a decline could be hidden in the "static-y" nature of the stats.

Here are his season by season stats:

There is a drop off in 2007, but he still put up some good numbers.  Factor in a new head coach and defensive coordinator and the numbers don't looks so bad, but not really conclusive either way.  If we really want to investigate a potential drop, I think we are going to need to look at the game by game logs and see if we can identify any trends.

Here are the game by game logs for Merriman's career.  I've removed game #1 since he was inactive due to a rookie holdout, his four suspension games, and one game against Detroit in 2007 he didn't play in (I can't remember why)

Lotsa numbers.  How about a chart that shows his sack stats and and a couple running averages to help us see any trends? 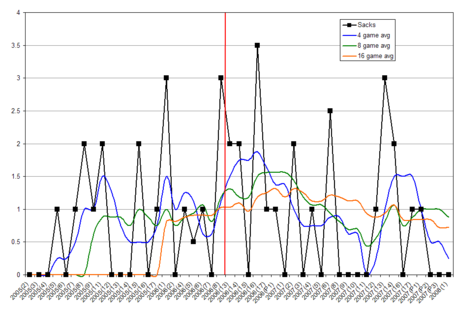 Click on the graph to see the detail. The black line with the points are his actual week to week sack numbers. The blue curvy line is his average sacks per week for the last 4 weeks. The green line is average for 8 weeks and the orange is the average for 16 weeks. The red vertical line is when his steroid suspension was.

Here is the same chart for tackles: 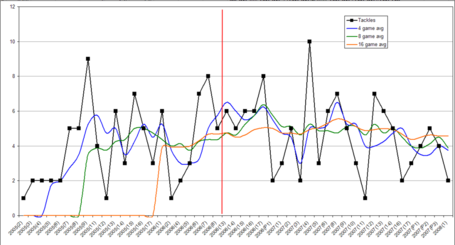 I don't see the drop off.  Sacks are going to be erratic, but overall, Merriman has been pretty consistent over time.  While I think the jury is still out on the post-injury Merriman, I don't think it is fair to say that Merriman has seen a drop off since his steroid suspension, the stats don't show it, and the respect from opposing offenses is still there.