Chargers By The (Jersey) Numbers: #13

Share All sharing options for: Chargers By The (Jersey) Numbers: #13

After an exciting, memory-inducing #12....we're back to a poor selection for #13 before ramping things up tomorrow.  Six quarterbacks, one wide receiver and none of them with the Chargers longer than three seasons.  Yippee.  At least it'll be fun to be reminded of obscure players that we forget about, right?  RIGHT?  Maybe not, but then again....this may lead to a surprise winner!  Let's get to the nominees and the shocking results...

Gilbert was with the Chargers for two seasons in the mid-90s, starting 2 games and going 0-2 in them.  Although he completed 60% of his passes as a Charger, he threw 5 interceptions against 3 TDs and had a QB rating of only 67.7.

So that's it.  That's all of them.  A bunch of backup QBs that didn't perform well enough to earn the starter's spot.  I guess I have to pick one to represent #13.  I really don't want to.  Wait a minute, I have an idea.... 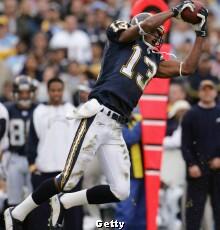 You recognize that guy, don't you?  Tall, lanky receiver with good hands.  Of course you recognize him!  You just don't recognize the number.  The winner, and the player chosen to represent Chargers jersey #13.......

Malcom Floyd, WR.  Do you remember when Chargers fans fell in love with Malcom?  I do.  Marty decided to give his starters a rest in a meaningless week 17 game against the Chiefs in 2004.  That's when three things stood out.  1) Philip Rivers, the kid we had drafted to replace Brees, was really good and maybe as good as Drew.  2) Ryan Krause is a beast that cannot be defeated.  3) Malcom Floyd has great hands and body control.  If he fills out a bit he'll be dangerous.  Well, two of those things actually came true.  And in that game, Malcom Floyd caught 3 passes (including a TD) while wearing the #13!  Krause struggled to stay healthy, and for some reason Floyd was sent back to the practice squad the following year, but eventually Floyd put on some more muscle and was given an opportunity to shine (switching to #80 in the process).

In 35 games with the Chargers, Floyd has caught 52 passes and 8 TDs.  He averages 15.8 yards per reception.  He has never fumbled.  The strangest thing about Floyd is how nobody else saw his potential.  He was a four-year starter at Wyoming, and in his senior season he caught 63 balls for 834 yards and 6 TDs.  Yet, Malcom was not invited to the NFL Scouting Combine and was signed by the Chargers as an undrafted free agent.  Another example of how good the San Diego Chargers scouting staff is.

Floyd has personality to go along with his game, and unlike a lot of professional football players he values his intelligence.  Floyd has received a grade of honors in Triple I (I don't know what it is either, but it measure intelligence).  Following his outstanding performance in Triple I, Malcom delivered again with another honors in Hematology/Oncology.  On exiting the Alumni auditorium, Mr. Floyd famously announced, "If it were not for the great variability among individuals, medicine might as well be a science and not an art."  Malcom is publicly a big fan of Chinese cuisine. When asked about the link between enterotoxins and fried rice, he exlaimed "B.cereus, fried rice?"

For those quotes alone, he wins.  Add in his performance as a freakishly-gifted wide receiver, who will probably be one of the Chargers starting receivers in 2009 or 2010, and he's locked it up.  He deserves this one because he's got no chance at #80.  So your winner, Malcom Floyd!