Chargers By The (Jersey) Numbers: #11

Share All sharing options for: Chargers By The (Jersey) Numbers: #11

Slim pickings on number 11.  Three nominees, threes quarterbacks and none of them very good.  At least not with the Chargers.  As a way to differentiate them, we're going to look at their total careers along with what they did with the Chargers.  Nominees after the jump. 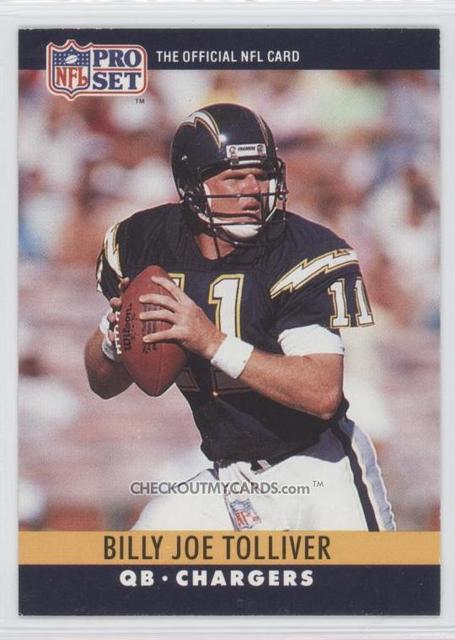 Billy Joe was a journeyman QB in the NFL for about 10 years.  He was just barely good enough to be a backup, but never flourished into anything more when given the chance.  He was drafted by the Chargers in 1989 and started 19 games as the signal-caller for San Diego, leading the team to an 8-11 record in those games.  After starting 14 games for the Chargers in 1990, Tolliver bounced around the league but never started more than 7 games in any other season.  He finished his career with 59 TDs, 64 Ints and the QB rating of 67.7.

Yes, that's the best picture I could find of Ed Luther.  Ed was drafted by the Chargers in the 4th round of the 1980 draft, but was never given much of an opportunity as the starter.  He played five seasons with the Chargers, starting 9 games and leading the team to a 2-7 record in those games.  After those five seasons he retired from the NFL, finishing with 12 TDs, 23 Ints and a QB rating of 63.2. 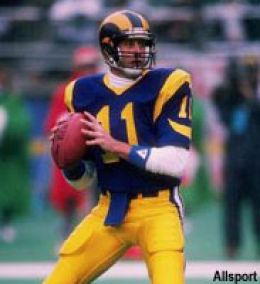 Jim was certainly the most successful and most recognizable player to ever sport the #11 jersey for the Chargers.  Everett played in the NFL for 12 years as a starting QB, having his most successful years in the late 80s and early 90s as a Ram.  After having stellar back-to-back seasons in 1988 and 1989, Everett finally was named to the Pro Bowl in 1990 despite a dip in his stats and the team's record (11-5 in 1989, 5-11 in 1990).

After playing eight years with the Rams, Everett have a couple of good seasons with the Saints and then finished his career with a short, disappointing season with the Chargers.  He started only 1 game as the Chargers QB, which the team won, but threw 1 TD against 4 Ints in four total appearances.  His career stats: 203 TDs, 175 Ints, 1 Pro Bowl appearance and a QB rating of 78.6.

Jim Everett was also a big reason Jim Rome has gotten to where he is today.  Without the incident in the video below, very few people ever hear of Rome or respect him.  Although his act can get tired sometimes, he's one of the few media guys I've seen stand up to an athlete who was threatening him with physical violence.  Hell, this might be one of the last times a TV host didn't kiss the butt of an athlete who came on his show.  If you've never seen it before, make sure you watch this video.

So there you have it.  Because there's not much in the way of competition, Jim Everett will represent the Chargers #11 jersey.  You can voice your displeasure in the comments.