Chargers By The (Jersey) Numbers: #23

Share All sharing options for: Chargers By The (Jersey) Numbers: #23

It's been a while for this, hasn't it?  Well, the closer we get to training camp the busier things get around here.  I'll try to remember to get these up even when things get busy, but no promises.

As for the nominees for #23, there's quite a few.  Twelve all together, but it's probably going to come down to two.  All of the fun is after the jump, including another AFL winner. 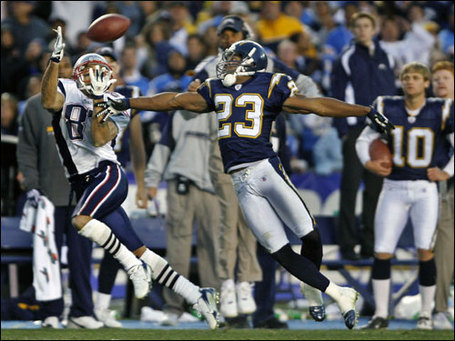 Quentin Jammer, CB.  The weird thing about Jammer is that you want to talk on end about what a great corner and character guy he's been for the team, but what is there to say?  Teams throw away from him because they're afraid of him.  Coming out of college he was a physical corner, but had to adapt his style to cut down on the pass interference penalties.  He plays strong and smart.  He's not the fastest corner on the team, but he's the best.  A top 5 corner in the league without a doubt.

In 98 games started as a Charger, he's intercepted 13 passes and defended another 99 passes.  He's also one of the best tackling corners in the league, which could eventually lead to a transition to the safety position.  In six seasons as a started he's forced 4 fumbles and recovered 5.  He's also collected 499 tackles (he had 86 in 2008), which is incredible for a cornerback.  Besides a championship, the two things that have eluded Jammer thusfar are a Pro Bowl appearance and a defensive touchdown.  He turned 30 years old just 11 days ago, and has never had a problem with injuries, so those things should not be far off for him. 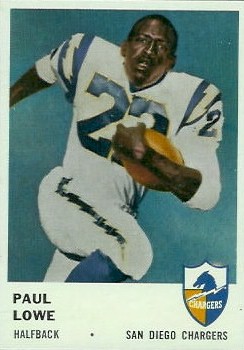 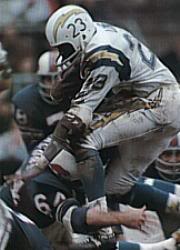 Paul Lowe, HB.  Not just a great player, but a great story.  To learn how Lowe found his way onto the Chargers, we go to Lowe's Wikipedia entry:

After graduating from Oregon State University, Lowe played for the San Francisco 49ers during the 1959 pre-season. However, Lowe was unable to make the team and was released before the regular season began. He returned to Los Angeles, California to get a job to support his wife. He took a job in the mailroom for the Carte Blanche Credit Card Corporation, owned by the Hilton family.

In 1960, Barron Hilton, son of famed hotel magnet Conrad Hilton, was the owner of the Los Angeles Chargers, a start-up team in the newly formed American Football League. The Chargers General Manager, Frank Leahy, asked Lowe to come out to the Chargers training camp on the basis of his talents at Oregon State a few years back. Lowe joined the Chargers as a free agent.

Plain and simple, Paul Lowe was a great find for the Chargers organization and is one of the best running backs in the team's history.  He has been named to the All-Time All-AFL Team and has been inducted into the San Diego Chargers Hall of Fame.  Lowe remains in San Diego to this day and supports his team as a season ticket holder.  Paul Lowe is your representative for the #23 jersey for the San Diego Chargers.