Chargers By The (Jersey) Numbers: #10

Share All sharing options for: Chargers By The (Jersey) Numbers: #10

We've finally made it to double-digits! I believe #10 is the highest jersey number allowed for current-day kickers and punters, so we'll probably only see a handful of special teamers after this. A total of eight players have worn the #10 for the Chargers throughout the years, but there's really only one that stands out. See all eight nominees after the jump and make sure to vote on who is the best Kicker in Chargers history. 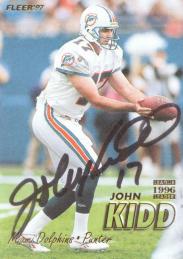 Kidd had a 15-season NFL career as an above-average punter. He spent a little more than four seasons with the Chargers, from 1989-1994. Kidd is still the highest drafted punter in Buffalo Bills history, spending six years with them before coming to San Diego. He also spent a little more than three seasons with the Miami Dolphins towards the end of his career. He set several NFL records and is the current career Yds/P leader for the Dolphins. 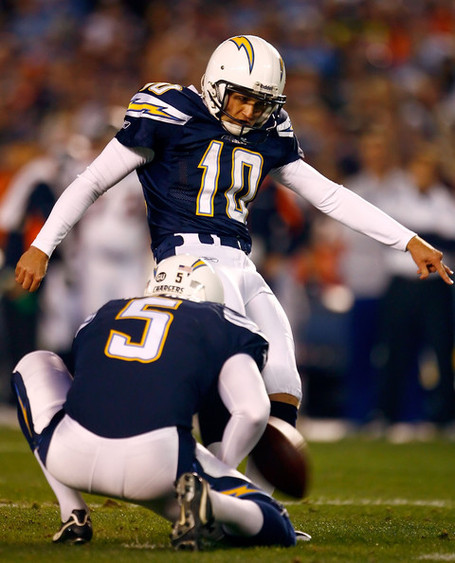 The graph below this is going to say more about Kaeding than I could express here, but I'll give you a little background. The Chargers were able to draft Kaeding in the 3rd round of the 2004 NFL Draft as a result of the Philip Rivers-Eli Manning trade with the New York Giants. Throughout his career he has been very accurate on field goals and extra points, only missing 1 extra point in 254 attempts. After looking over the stats and comparing them to Kidd's, there's no comparison. Kaeding is the winner to represent the #10 Chargers jersey, but the real question is....is he the best kicker in Chargers history? Let's look at the three best and their stats with the Chargers:

As much as I hate to say it, that may put Rolf out of the argument for me. Kaeding has the accuracy advantage, but Carney's more than doubled the amount of attempts and made field goals. Who knows if Kaeding will be able to reproduce those numbers as a Charger. It's up to you guys though. Who should be the starting kicker on the Chargers all-time team?