Considering the overwhelming lack of response to the first installment of this series, I considered stopping it altogether.  Then I re-read it and liked it.  Seriously, what's not to like?  Even if you don't agree with all of my opinions, it stands as another reminder of the turmoil this division has faced outside of San Diego.  Two of the three teams have new starting quarterbacks that have question-marks attached to them.  The other one has a new veteran breathing down his neck for the starting job and a new offensive coordinator.  What's not to love as a Chargers fan?

So I'm going to try this again.  I hope there's a better response this time as we analyze the backfields of AFC West teams and rate the offseason changes that have (or haven't) been made. 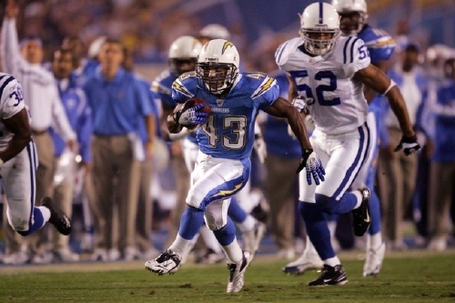 San Diego Chargers: Change by addition and possibly by approach.  Going into 2008, the consensus was that LaDainian Tomlinson was the #1 back and would return to form after his injury in late 2007.  Jacob Hester had been drafted to be his backup and to replace Michael Turner.  Well, very quickly we learned that Hester could be an effective player but the coaching staff obviously thought he didn't have what it took to be a backup and Darren Sproles came in to do the job.

What drop-off?  After looking at these numbers, I almost went back on my idea that Sproles should be the 3rd string RB.  Actually, that phrase isn't right.  I believe the Chargers should have a RB by committee.  There's so many reasons for it.  One, it'll extend LT's career.  Two, LT and Sproles would be healthier and more rested for the playoffs.  Three, it gives Gartrell Johnson a chance to grow on the field without much pressure.  I could go on and on.  Anyways, I almost went back on that after seeing how successful Sproles was last season.  I almost said "Ah, the hell with it, give Sproles more carries and keep Gartrell on the bench."  Then I remembered last year's running game.  It was poor because LT was hurt, true, but the thing that stood out the most was how it lacked versatility.  Every time the ball was handed off the defense knew that the RB wanted to go outside.  They knew the RB would try and win the battle with speed instead of power and there was nobody on the team to change their mind.

Jacob Hester was drafted to be that power back that gives the offense versatility.  It's who he was in college.  Although he was small, he was a bit of a bruiser but also had speed and soft hands.  Other NFL teams were worried that he wouldn't be able to be a bruiser in the NFL and they may be right (when it comes to his running, anyway).  Gartrell Johnson, to me, equals all the reasons I mentioned above.  Because of their size, Sproles is just as big a risk as Tomlinson to get worn down and injured.  I don't really care if either of those guys see the field in the first 5 games of the season.  I want them late in the season and in the playoffs to be at the top of their game.  So, what did the Chargers do to their running game over the offseason?  They had their FB beef up and created some versatility in the backfield by drafting a power back.

Offseason Grade: B+.  My grade at the end of the season will be more telling.  I'm still worried that these three guys are not going to be used the right way.  I'm concerned we're going to get to Week 17 and Gartrell, with less than 20 carries under his belt, will have to start a game because LT is hurt and Sproles isn't trusted to be a starter.  I don't want playoff weeks centered around LT's injuries anymore.  I'm hopefuly we're past that and this pick gives me hope, but we'll see... 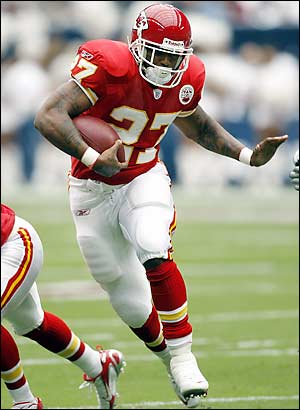 Kansas City Chiefs: Larry Johnson is a bum.  There, I said it.  My definition of a "bum" when it comes to sports is somebody who is so talented that their team keeps relying on them, even though year after year the guy lets them down.  Is it LJ's fault?  Well, the off-the-field problems certainly are, but the on-the-field problems may not be.

In 2006, Larry Johnson carried the rock 416 times.  That seems like a lot, doesn't it?  Well, it's the most amount of carries by one running back in one season in the history of professional football.  Some other guys right behind him on that list?  Eddie George and Jamal Anderson.  Two guys that physically broke down after being overworked.  Not only that, LJ turns 30 in November.  So his body's working against him already.  Since that 2006 season, in which Johnson went to the Pro Bowl and carried the Chiefs to a 9-7 record, Larry has had a hard time staying healthy.  Yet, the Chiefs keep looking for him to return to form.

In 2007, Johnson managed to get into 8 games.  In 2008, it was 12.  Want a picture of how his performance, when healthy, has gone down?  Lets look at how efficient he's been over the course of his career.

Every team wants a guy that can score 20 times and fumble less than 5 times each season, but fumbling as many times as you're getting in the end zone should not make you the centerpiece of an offense.  Plain and simple, LJ doesn't have anything left.  I'm actually surprised he had those big seasons in 2005 and 2006 considering how he was run into the ground at Penn State, but basically have the first-half of 2004 off probably helped that.

So in 2008 the Chiefs drafted Jamaal Charles.  He was effective when he played (5.3 Yards Per Carry), but the coaching staff seemed to prefer Johnson.  Going into 2009, LJ is again the starter.  He's been a two-time Pro Bowler, a player with off-the-field issues, injury-prone and someone who is not afraid to speak out against his coach to the media.  Why is KC still pinning their hopes on him?  Because he's a bum, and they're getting suckered in.  It happens to the best of us (I'm looking at you, David Boston).

Offseason Grade: D.  Okay, so Charles is a year older and wiser.  That's the only reason they don't get an F (LJ is another year older as well).  Jamaal is also probably a better fit for Haley's offense because he's a great receiver coming out of the backfield.  He should be given the starter's role and Johnson should be shopped, but that's not happening this year.  Maybe next year.  The Chiefs drafted little-known Javarris Williams out of Tennessee State this year, but if he sees the field it'll be as a FB only. 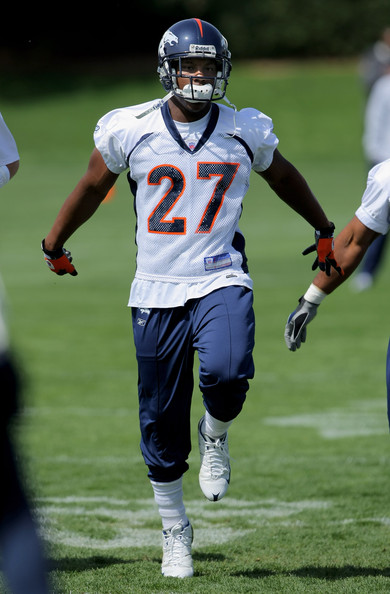 Denver Broncos: Okay, let's see if I can cover it all without my head exploding.

Before I get to the 2009 backfield, a crazy statistic.  The Broncos didn't have a single running back with more than 76 carries last season.  LT can get to that number in 3 games and they didn't have a single guy get to it in an entire season.  Peyton Hillis started the most games for them last season, with 6, and even some of those he started as the fullback.  What an unbelievable season for the Broncos backfield.

Arrington is crossed out because he was signed by the Broncos and later released, I believe because he failed a physical.  Is Moreno an improvement over Pittman?  Sure.  I could see that.  Is Buckhalter better than Selvin Young and Tatum Bell?  Hmmmmm.  I don't know.  I'd say he's about equal, but he's older and a bigger injury risk.  If it would've been cheaper I would've stuck with Selvin Young.  Torain has potential but will probably never see the field now and I'm unsure why they even grabbed Darius Walker.  Four new RBs for a coach that's known for his passing game.  Odd, isn't it?

Offseason Grade: C+.  I'm giving them the benefit of the doubt and assuming that Moreno is good.  Not great, but good.  I'm a little concerned with a change in the run-blocking philosophy because those guys are too small to do anything else but cut-block.  The Jordan and Walker signings just seem like the team is planning for their RBs to start dropping like flies again.  This grade is very dependant on how Moreno performs and if Buckhalter can contribute anything without getting injured. 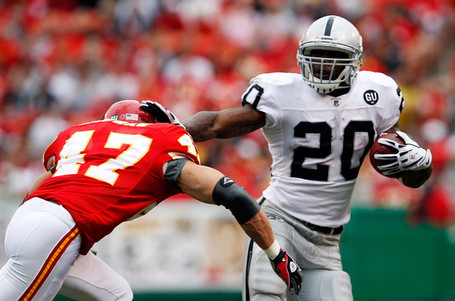 Oakland Raiders: I gave the Raiders a good grade when I was doing the progress reports for QBs and I immediately noticed traffic coming in from Raiders sites and forums.  They liked what I said.  They said "Even Chargers fans can see that this has been a great offseason for the Raiders!"  I want to answer that by saying I do think that the Raiders have had a better offseason than KC and Denver, in terms of players that were brought in, but that doesn't mean I'm picking them for second in the division.  Nor do I think they'll beat the Chargers this year.  With that being said, get ready for another good grade for the Raiders....

The Raiders have a three-headed running game.  Justin Fargas carries the bulk of the load (because he's the most consistent, in terms of performance and health), Darren McFadden is the big play guy who needs to stay fresh and healthy and Michael Bush is a bruiser who can put away games when Oakland has the lead.  All three of those guys were good last season and there was no need to replace them.  So the Raiders did the smartest thing you could possibly do for a backfield of young, talented running backs.  They signed Lorenzo "get behind me for 1000 yards" Neal to be their starting fullback.  Then they started filling holes on their offensive line with good free agent players, like Khalif Barnes.

Are you one of those people that think the signing of Lorenzo Neal doesn't mean that much?  Let's look at the RBs that Neal has lead to 1,000 yards seasons:

...and the only reason he's had any seasons without a 1,000 yard rusher behind him is because he's played for some teams that split carries (like the Raiders).  Coming up on 40 years of age, Neal isn't what he once was but he's certainly good enough to improve the Raiders run-blocking.  He'll get the most out of those three talented backs.

Offseason Grade: A.  Any time you can sign a future Hall of Famer to be in on every running play, that's going to get you a good grade in my book.  With signings like Garcia and Neal, the Raiders are trying to add some greatly-needed veteran leadership to the locker room and in film study.  I don't know that it'll turn into more than two or three more wins in 2009 from 2008, but it should help all of their young players in the long run.  The Chargers used the same philosophy years ago by bringing in players Neal, Roman Oben, Chris Chambers, Marlon McCree and Randall Godfrey.