Looking for cool San Diego Chargers keychains? What if they're free?

Share All sharing options for: Looking for cool San Diego Chargers keychains? What if they're free?

Alright, this is going to sound ridiculous, I know.  Let me start by saying that I would never endorse a single product on this blog unless it was badass.  For instance....

Looking for the best California burrito in San Diego?  Papas & Tacos on 2nd St. in Bankers Hill.  Make sure you get plenty of the salsa verde.

How about an amazing sandwich that has an awesome gimmick?  Devine Pastabilities in Point Loma.  That's right, pasta SANDWICHES without the mess.  Salad sandwiches for the health-conscience.  Or just swing by and pick up one of their "I (heart) Carbs" shirts.

You get the idea.  None of those places have any idea I just mentioned them and they probably never will.  I don't get a commission or anything.  I don't want one.  Just trying to point business in their direction to ensure that they're still open when I come to San Diego.  (The best Chai Latte in San Diego used to be downtown, but has since been forced to move to Banker's Hill.  I was too late on that one.)

A few weeks ago I was contacted by Jeff from Wholesale Keychains about possibly running a contest or giveaway with you guys for his San Diego Chargers Keychains.  I took a look at his selection and wrote back "You can send me some samples if you really want, but I don't know that my readers are interested in outdated keychains."  Jeff was intrigued.  "Outdated?  How?"  I explained to him that the helmets were now white with a yellow lightning bolt instead of blue with a white one.  Even the one that just said "Chargers" looked like an old logo.  In my last line I said "You'd probably get more interest if you went with the old-school powder blue and yellow anyways."  I haven't heard from Jeff since.  That was two weeks ago. 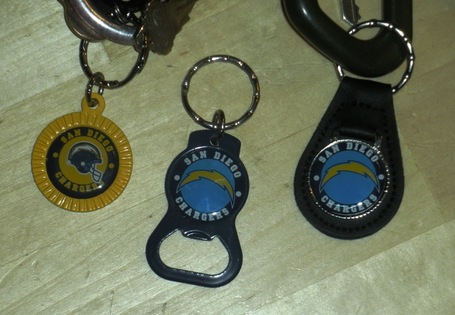 These are the keychains that showed up on my doorstep yesterday.  As you can see, Jeff took my advice and updated two of the ones that were sent (while adopting the power blue color scheme).  After looking them over thoroughly (well-constructed), I immediately picked my favorite one and threw it on my keychain.  About 30 seconds later my wife did the same thing, proving me wrong by picking the the one with the 90s Chargers helmet on it.  Since then I've switched back and forth between the two powder blue keychains three times.  Yes, I know I said I got them yesterday.  They're awesome and I'm crazy.

These keychains came with a letter from Jeff saying that he'd love to get some of these into the hands of the BFTB readers, so we'll be having a contest (or giveaway, or something in between) soon where you'll be able to win a keychain and there should be more than one winner. Jeff also stressed that the keychains can be engraved in the back, even though mine have not been.  Hopefully the website will be updated with the new keychain images soon, but for now I'm sure they'll work with you to make sure you get the keychain that you want.

What if you don't have the patience to wait for the contest?  What if you don't want to risk not winning?  Do you need to get a Chargers fan a quick gift?  No problem.  You can order your keychains today and get 10% off by entering "boltsfromtheblue" as your Promo Code.  I don't get a dime from them under any circumstance, I just think these things are cool.  Now even if I'm not wearing a Chargers jersey, shirt or hat, I can still show off my favorite team when I pull out my keys.  If you have any questions about this keychains (example: what happens when you run one over with a car?) or just want to call me a sell-out (you not selling out if you're not making money), please do so in the comments.