Now that everyone's roster is mostly intact and ready for training camp, I'd like to compare the teams in the AFC West by position.  The first one is quarterback.  After the jump, a rundown of moves that were made (or weren't made) to try and improve the passing games of each team.  And since it's me, we'll be diving headfirst into a big batch of statistics to try and predict the future.  Come on, it'll be fun! 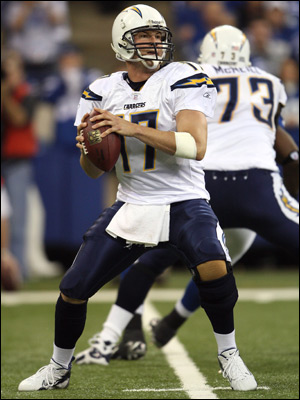 San Diego Chargers: No change at all.  The biggest change to their passing game is the improvements that have made on the offensive line and in the running game.  The receivers are the same, but considering they're quite young we can add "a year older and wiser".  The quarterback is the same and hopefully remains the same for a long time.

In 2006 and 2007, Philip Rivers showed flashes of brilliance in his play, but then showed stretches of poor play as well.  In 2006 he once had back-to-back games with a completion percentage lower than 35%.  The coaching philosophy in that season was to have Rivers "manage the team" and not throw too many passes with a lead.  In 2007 he proved himself to be less of a rollercoaster, but after throwing 3 TDs and 0 interceptions in a win against the Houston Texans he quickly following up with back-to-back games without a touchdown (0 TDs, 3 interceptions).  He always had the talent, he just needed to find the consistency.

In 2008, he found it.  He only had 2 games in which in finished with more interceptions than touchdowns (compared to 6 in 2007).  He threw for 300+ yards 5 times in 2008, after only doing it once in 2007 and twice in 2006.  Although he consistently started slow in games, I believe because of playcalling, he finished strong when it mattered most.  That's probably why, statistically, 2 of his worst games from 2008 were easy wins against the Raiders.  His most impressive stat that nobody seems to mention is that in 2008 he lead the league in touchdown passes (tied with Brees).  The winners in the four seasons previous?  Tom Brady, Peyton Manning, Carson Palmer and Peyton Manning.  A good crowd to be in, for sure.

Offseason Grade: B.  No change is good change, but we better hope Vincent Jackson can stay healthy and out of trouble.  Losing him for any length of time would be a big blow.  While there's depth in the way of talent behind him, I don't know that any of those guys would be able to come in and be a number 1 receiver.  Remember for how long the Chargers were looking for that number 1 guy?  That forced the Chambers trade, and luckily for the team VJ blossomed when Chambers looked to be on the downside of his career.  Trying to scare a defense with Malcom Floyd, Buster Davis, Chris Chambers and Legedu Naanee wouldn't be so easy. 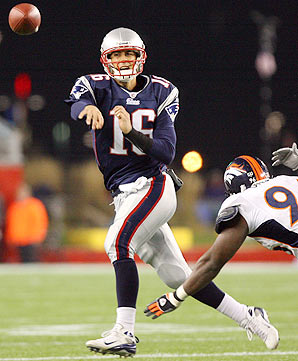 Kansas City Chiefs: Oh boy.  Are you ready for this?  Okay, first let us look at how they managed in 2008.  We're going to be focusing on a specific area of their passing game in a moment.

In '08, the Chiefs ranked 8th in the league in passing touchdowns but 28th in rushing touchdowns.  They also spent the majority of the year in a spread offensive formation that created short, quick plays.  Does that tell you anything?  It tells you that they didn't trust their offensive line.  The lack of rushing TDs show you their lack of trust was warranted.  Even in their Pistol formation, the offensive line had a hard time keeping their QB on his feet.  In 16 games they allowed 37 sacks, 12th worst in the league.  By comparison, Philip Rivers was sacked 25 times last season.

Even with all of the sacks, one thing was obvious when watching the Chiefs late in the season.  They had found their quarterback.  Tyler Thigpen was able to forget about bad throws (an undervalued skills that Brees and Rivers both have) and somehow became the leader of an offense filled with veterans even though he was a rookie out of Coastal Carolina.  He may not have had Favre's gun of an arm, but he had brains and moxy.  That'll get you far in today's NFL.  However, with every new regime in the NFL comes a new QB and when Scott Paoli signed on as GM of the Chiefs Tyler Thigpen was immediately lost in the shuffle.

So, they start 2009 with Matt Cassel as their starter.  The same questions lie on Cassel as with any player or coach leaving the Patriots: Can he do it without Belichick?  I don't think so.  Consider these points:

Offseason Grade: C-.  If I'm a Chiefs fan I'm happy with the Paoli hiring and everything he's done since.  If nothing else he's shown that he's interested in building a new Patriots-like dynasty in Kansas City.  So for everything I've said about Cassel, remember that the league's smartest Head Coach wanted to pay him a lot of money and one of the league's best GMs did whatever he could to make Cassel the face of his new franchise.  On that alone the kid has a chance to succeed, but I think his first year may be a tough one and he'l have to stand strong in the face of criticism. 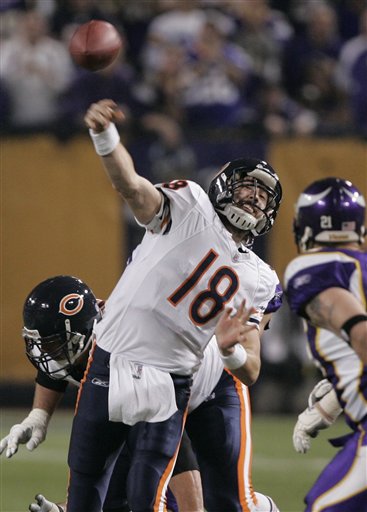 Denver Broncos: Isn't that picture great?  "I'm gonna throw it as far as I can and hope that works!"  I throw Orton in the same class with Cassel.  I was a big fan of Kyle Orton in college (I'm sure Wonko was too) and thought he had all the tools to be another Drew Brees.  Then he got to the NFL and it turned out he wasn't as accurate as I was led to believe.

With a career completion percentage of 55.3%, Kyle is not the ideal fit for Josh McDaniels system.  From what I've seen in his playcalling, Josh likes to throw, throw, throw.  To do that, and to keep the chains moving, you need a guy who is going to protect the ball (Orton: 30 TDs/27 INTs) and complete a lot of short passes.  Orton is more the type of QB that sticks around and tries not to make too many mistakes.  He's the modern-day Trent Dilfer and he's going to be asked to be the centerpiece of Denver's offense.  Yikes.

As far as the rest of the offense, it's been handled in roughly the same manner as the rest of the team.  The coach has rubbed a few of the remaining star players (Brandon Marshall, Tony Sheffler) the wrong way and might have crippled his offense further in the process.  By the way, nobody has mentioned it yet but, wouldn't it make sense to trade Brandon Marshall for Anquan Boldin?  Instead of trying to figure out who goes where, let's assume that cooler heads prevail and the offense still has Marshall and Sheffler to start the season.  That gives the Broncos a dangerous wide receiving corps and a backfield stuffed with talented running backs.  The key to this is Orton.  If this was going on in New England, I'd bet money that the team had seen something that the rest of us hadn't and Orton was going to be great.  However, in Denver I'm not so sure.

Offseason Grade: F.  Although it wasn't mentioned above, the drop-off from Cutler to Orton is massive.  It's also something that seemingly could've been avoided if McDaniels could've swallowed his own ego.  The ongoing issue with Brandon Marshall is further evidence that the Broncos seem to heading in the wrong direction under McDaniels.  If he can't mold Kyle Orton into the accurate quarterback I saw at Purdue, the owner is going to be red-faced for the entire 2009 season. 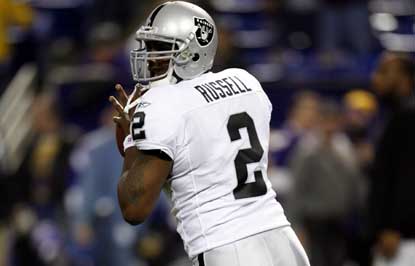 Oakland Raiders: Here's the Raiders problem: Al Davis.  You've heard that a million times right.  Well, do you know what Al Davis' problem is?  The easy answer is "He's crazy."  He's not crazy.  He's an owner that's maybe a little too in love with his team and that drives him to try and take control too often, but that makes him no different from Jerry Jones or Daniel Snyder.  Both Al and Jerry have won championships, so you can't argue that their methods don't work.  So why is Jerry's team going in the right direction and Al's going in the wrong one?  It's a quick and easy answer, and surprisingly one that is completely logical.  In his old age, he's lost his patience.  He desperately wants to get the Raiders back to the top of the NFL, but is terrified that he'll miss the culmination of any 5 or 10-year plans.  Al's time to win is now.  Who can blame him?  When you're drinking beer and eating ribs next Saturday, Al Davis will be turning 80 years old.

JaMarcus Russell is fun to watch.  He's like Michael Vick in that way.  His arm is so strong that anything could happen on any given play.  I watched a lot of him last season and saw him throw rockets downfield a handful of times with defensive players hanging on to him.  With a quick flick of his wrist, the ball is at it's destination in a blind of an eye and everyone who saw it begins to dream about all the things that are possible with this kid.  That's the difference though.  On my couch I'm thinking "With the right coaching, Russell could be one of the league's best QBs in 5 years."  Al Davis is only concerned with making him the league's best QB on the league's best team now.  And that's no way to build a winning franchise.

Offseason Grade: B.  The Khalif Barnes and Jeff Garcia signings were both shrewd moves.  Outside of his time in Cleveland and Detroit, Garcia has done wonders with very little around him.  Will Garcia be a mentor to Russell?  Probably not.  He's a competitor and he wants that starting job.  But will it benefit Russell to have a professional veteran QB around to watch?  Absolutely.  I disagree with a lot of people that Garcia will be starting early in the season.  I don't think Garcia will see the field much at all and I think he'll retire after this season, but I do think his presence will help JaMarcus progress along.  Too bad it still won't be quick enough for Al Davis.