Chargers By The (Jersey) Numbers: #22

Share All sharing options for: Chargers By The (Jersey) Numbers: #22

Yikes. These common numbers are killers. A whopping eleven players have worn the #22 for the San Diego Chargers, but a large number of them haven't left much of a mark on the team. In fact, only three of them have spent more than three seasons with the team. However, those three guys were all quite memorable and will battle it out after the jump and in the poll below. Click the link to see their stories and stats before voting.

Not in the competition: 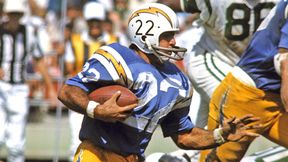 Dickie Post, RB. Post was drafted in the 4th round of the 1967 AFL Draft by the San Diego Chargers. Dickie came flying out of the gates, winning the AFL Rookie of the Year Award and making the Pro Bowl in his first season. An elusive runner of comparable size to current Chargers RB Darren Sproles (Post was 5'9", 190lbs), Dickie followed up his first season with two more with similar success. In his third season he made the Pro Bowl again, but in his fourth season durability became a concern and he was sent packing. He spent his final season trying to find a spot with the Houston Oilers and Denver Broncos, but failed on both teams and retired. 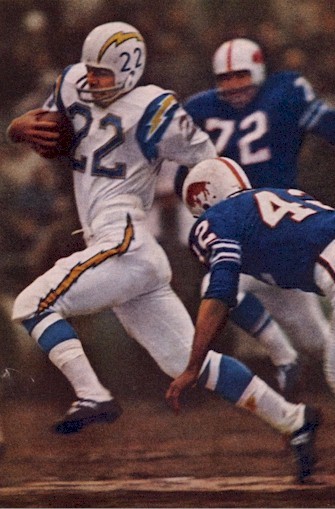 Keith Lincoln, RB. An incredible football player. Lincoln was drafted by the Chargers in the 1961 AFL Draft and by the Chicago Bears in the 1961 NFL Draft. Luckily for San Diego fans, this incredibly-versataile player decided to sign with the Bolts. In his first season, Lincoln was mostly a backup but did return punts. In 7 returns, he collected 150 yards and 1 touchdown. The team quickly realized they needed to get the ball in Keith's hands more often.

In 1963 he led the team in rushing, punt return and kickoff return yards. In the 1963 AFL Championship game, Lincoln accounted for 329 yards of total offense as the Chargers defeated the Boston Patriots 51-10.

A five-time Pro Bowler, Lincoln produced unforgettable plays virtually every season. In 1961 he caught a record-setting 91 yard TD pass; in 1962, he ran a kickoff back for a Chargers' record 103 yards. Lincoln had three games in which he gained 100 or more yards on 14 or fewer carries, and in both 1963 and 1964 was the AFL All-Star Game Most Valuable Player.

Lincoln is a member of the San Diego Chargers and Washington State University Athletic Halls of Fame. 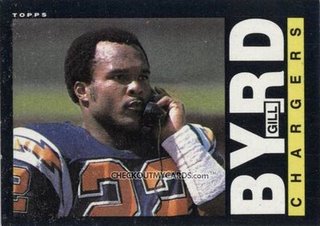 After looking through everything Keith Lincoln did for the Chargers, I thought he was the sure-fire winner. I mean, the guy is in the Chargers' Hall of Fame! How can you get better than that? Then Gill Byrd's stats blew my freaking mind.

10 seasons, all with the Chargers. 42 interceptions, including a stretch of four seasons with at least 6 picks. 1 forced fumble, 4 fumble recoveries and 2 defensive touchdowns (both off INTs). He only made the Pro Bowl twice, during his last two seasons, but it may have been a case of being on a small market team that didn't win a lot of games. During his tenure, the Chargers won more than 8 games only once (his final season). They were below .500 seven out of his ten NFL seasons. Those two Pro Bowl selections were recognition of his outstanding play throughout his career and were also part of the Chargers success in 1992.

Great player? Check. Great guy? Check. Under appreciated? You betcha. Better than Keith Lincoln? Maybe. You know what that means.....BATTLE ROYALE TIME! Time to vote for your favorite #22 to represent the number for the San Diego Chargers. Vote early, vote often!