Chargers By The (Jersey) Numbers: #21

Share All sharing options for: Chargers By The (Jersey) Numbers: #21

You think this one is going to be easy, don't you?  Don't be so sure about that.  All in all, ten players have worn the #21 for the San Diego Chargers.  Eight of them don't stand a chance and the other two will compete for the right to represent the #21 for the Bolts after the jump.

They Didn't Stand A Chance: 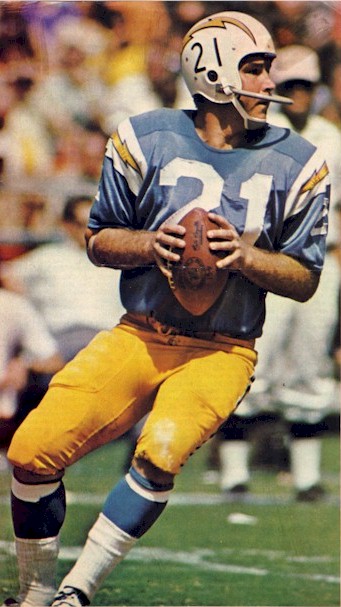 Ready to be blown away?  Let's start in college.  Hadl was the first KU player to be picked twice for All-America (1960 and 1961) honors for his skills as a quarterback and half back.  Hadl also excelled as a defensive back, punt returner and punter - he led the country with a 45.6-yard punting average in 1959.  Hadl's No. 21 jersey is one of only three KU has retired.  John, who was picked for the all-conference team for three seasons, wound up with 1,281 yards passing and 1,016 yard rushing.  He still holds two KU records: Longest interception return, a 98-yard run against TCU; and longest punt, 94 yards vs. Oklahoma.

Now, like a lot of recent winners on this list, Chargers fans had the pleasure of watching John Hadl quarterback their team for a long time because he made the decision to.  In the 1962 NFL Draft, Hadl was drafted in the 1st round (10th overall) by the Detroit Lions.  It was widely believed he would sign with them, but on a whim the Chargers used their 3rd round pick (24th overall) in the 1962 AFL Draft on Hadl and were able to sign him.

In total, Hadl spent eleven seasons in San Diego and was the starting quarterback for ten of those seasons.  He made the Pro Bowl five times as a Charger, and once after being traded to the Los Angeles Rams.  While he never led the Chargers to more than 9 wins in any season, he did lead them to a 9-2-3 season in 1965.  Although he stats may not mean much in comparison to Fouts and Rivers, who were in better passing systems, they are still impressive.

Also, and this is a big plus, Hadl was the last regular starting quarterback to wear a uniform number greater than #19 before the NFL adopted a rigid uniform numbering system in 1973. 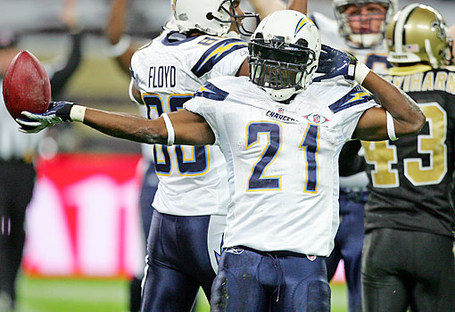 Honestly, one of the most interesting thing about going through the record books for this thing is seeing how the face masks change so dramatically and quickly.  LT takes it to a whole new level.  But that's neither here nor there.

What is there left to say about Tomlinson?  I feel like any discussion about him leaves something out.  In eight seasons with the Chargers, he's never missed a single regular season game.  He's never had less than 1,110 yards or less than 10 TDs in any season.  In 2004 2006, he broke the record for the most non-passing touchdowns in a single season....and he broke the record in 13 games.  He also broke a 46-year old record for the most points scored in a single season.  He won just about every award imaginable that season, including the league's MVP award.  Tomlinson led the league in rushing with a total of 1,474 rushing yards in 2007, becoming the first player since Edgerrin James in 2000, to win back-to-back rushing titles.

You know what, I think the only way I'm going to feel complete with a post about LT is to show the records the man holds:

WOW.  I knew all of those and it STILL amazes me to see them.  There's no question who your winner is.  LT might just be the greatest Chargers player ever.  If he can come back to his old form for a few more seasons, he may end up as the greatest NFL player ever.  Period.  Your winner, and the guy who will one day get this number retired by the Chargers, LaDainian Tomlinson.