Chargers By The (Jersey) Numbers: #20

Share All sharing options for: Chargers By The (Jersey) Numbers: #20

Holy crap there are a lot of players who like the #20.  It seems whenever the number becomes available it's immediately snatched up by somebody, anybody.  More than fifteen players have worn the #20 jersey for the San Diego Chargers, including five cornerbacks, two safeties and eight running backs.  This one is going to have a lot of nominees to go through, and the winner is not at all guaranteed.  Get ready for some statistical fun after the jump.

Probably the greatest kick returner in the history of college football, Rodgers won the 1972 Heisman Trophy.  He did more than just return kicks though.  To realize the full-effect of how Rodgers effected each game he played for the Nebraska Cornhuskers, you simply had to look at what he did during the 1971 Orange Bowl against Norte Dame.  In the one game, Rodgers ran for three touchdowns, caught a 50-yard pass for another touchdown and threw a 54-yard touchdown pass to a teammate. He did all this before leaving the game with 21 minutes still to play.  As they say, speed kills.

The Jet was drafted by the Chargers in the first round of 1973 Draft, but was signed away by a lucrative deal to play in the CFL.  Always a fan favorite there, he won the CFL's Most Outstanding Rookie Award in 1973. In his four years with the Montreal Alouettes, Rodgers won the Jeff Russel Memorial Trophy twice (Eastern division MVP and CFL runner-up) and "All-Canadian" all star honors and helped lead his team to a Grey Cup championship in 1974.

In 1977 he finally took his shot at the NFL, signing with the Chargers.  Hamstring injuries kept him out of the game for most of his first NFL season and the following year a freak knee injury sustained during team practice ended his career after only 17 NFL games.  As good as he was in college and the CFL, the world will never know how impactful Rodgers could've been in the NFL. 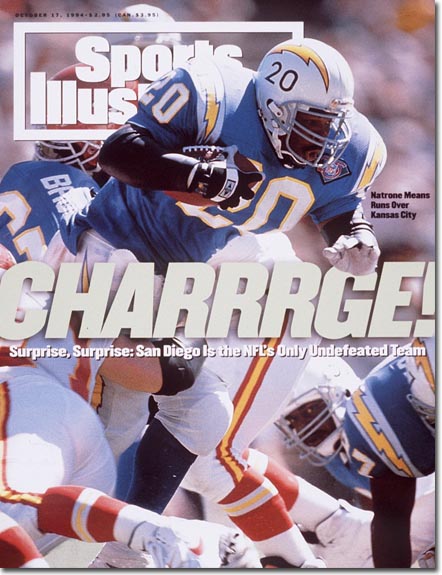 Let's start with the stats.  Five seasons with the Chargers, 3,885 rushing yards, 34 rushing TDs, 631 receiving yards and 2 receiving TDs.  One Pro Bowl selection, garnered while leading the 1994 San Diego team to the AFC Championship and a Super Bowl appearance.  That season alone is ridiculous: 16 starts, 343 carries, 1,350 rushing yards and 12 rushing touchdowns.  Where Stan Humphries has to be given credit as the leader of the offense on that team, Natrone has to be given credit for carrying that team on his back for nearly every game they played.  That's why he got the SI cover.

What makes Natrone special is not the stats though, and it's not even his rise to NFL stardom after coming out of North Carolina, but how much the fans loved him.  Everyone seems to have their favorite Natrone Means moment (and their favorite nickname for him).  He was a big, tough running back who gave 110% every single game.  That stands as a fact that made him a good player and also probably played  ahand in shortening his career, and he struggled with injuries after that 1994 season.  It doesn't matter though, Natrone is a pillar in the history of the relationship between Chargers players and Chargers fans.  More than any other winner of a jersey number, Natrone demands some good moments from you guys in the comments.  What's your favorite Natrone game?