Chargers By The (Jersey) Numbers: #18

Share All sharing options for: Chargers By The (Jersey) Numbers: #18

Your voices have been heard.  While the winner of #18 will be announced before the jump, and can probably be guessed right now, we'll give you a bit of insight on the other nominees as well. 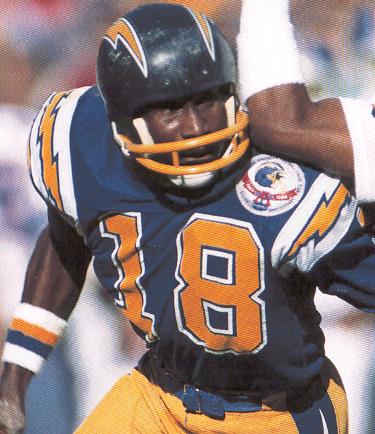 Charlie Joiner, WR. Stats, stories, memories and other Chargers players that have sported #18 can be found after the jump.

After serving as a quarterbacks coach the previous season, Stephenson succeeded Chuck Knox as Buffalo Bills head coach on February 3, 1984. Stephenson was reportedly surprised to get the job, claiming that Bills owner Ralph Wilson "never explained his reasons for selecting me." Under Stephenson, the Bills went 8-8 in 1983, 2-14 in 1984, and after losing the first four games of 1985, Stephenson was replaced by Hank Bullough. Perhaps the most lasting impression that Stephenson left on the Buffalo Bills was when he decided to change their helmet color from white to red prior to the 1984 season, insisting that the change would aid Buffalo quarterbacks in finding receivers downfield. At the time, three of the Bills' four division rivals (New England Patriots, Indianapolis Colts, and Miami Dolphins) wore white helmets. The gambit didn't work as interceptions actually increased the subsequent season.

Rote was the only man to quarterback teams to championships in both the NFL and the American Football League. He is also one of seven NFL quarterbacks to rush for at least 3,000 yards during a career, and one of only two QB's (Fran Tarkenton is the other) to top 300 yards rushing in a season seven times. Rote's 35 rushing TD's are the fourth highest amount in NFL history by a QB.

Rote led the 1957 Detroit Lions to a championship, then followed that six years later with the AFL's Chargers, who defeated the Boston Patriots to win the 1963 championship. 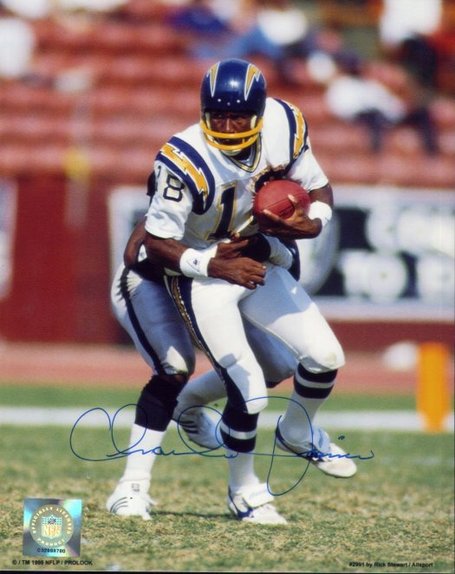 Charlie Joiner - One of my favorite players of all time, it's hard to find anyone who was as consistent as Charlie.  He spent 3 and a half years with the Houston Oilers and 3 and a half years with the Cincinnatti Bengals before spending his final 11 as a San Diego Charger.  In those 11 seasons he caught 586 passes, 47 touchdowns and never missed a game.  How's that for healthy and consistent?  Joiner was selected All-Pro in 1980 and 2nd Team All-AFC in 1976.

Although he never played in a Super Bowl, Joiner helped the Chargers reach the AFC title game in the 1980 and 1981 seasons.  In the 1980 AFC championship game, he caught 6 passes for 130 yards and 2 touchdowns.  In January 1982, he played a key role in San Diego's 41-38 divisional postseason overtime win over the Miami Dolphins in a game that is known in NFL lore as The Epic In Miami.  Joiner caught 7 passes for 108 yards in the game, including 2 key receptions on his team's game winning drive in overtime.  His 29-yard reception on the penultimate play of the game set up the winning field goal.

His contributions don't end there.  Charlie Joiner coached the Chargers wide receivers from 1987-1991 and last year regained that position.  The growth you saw in Vincent Jackson, Malcom Floyd and the rest of the receivers last year?  That was Joiner.  He's probably Philip Rivers' best friend, because without a major star in the bunch he gets his players to fight for the ball and run their routes with precision.  So along with being a part of the Chargers AFL days, and being good enough to be #100 on Sporting News' list of the greatest football players of all time, he's helping the current crop of receivers and hopefully will be with the team for a long time. 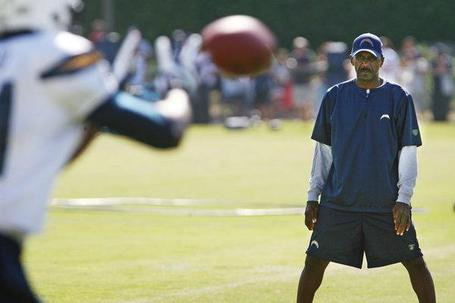