Chargers By The (Jersey) Numbers: #15

Share All sharing options for: Chargers By The (Jersey) Numbers: #15

Jersey #15 is quite different from jersey #14.  It's not a retired number, and while a legendary player has worn it with the Chargers....he wasn't with the team very long.  Actually, none of the nominees were with the team for more than four seasons.  So for possibly the only time between now and #22, we have a close race!  Your nominees and winner after the jump.

In Super Bowl XVI, Wersching tied a Super Bowl record by kicking 4 field goals, and his team won 26-21. He won another Super Bowl ring with the 49ers in Super Bowl XIX, who defeated the Miami Dolphins, 38-16. When he retired, Wersching held 49ers records for points, field goals and extra points. He is the twelfth player in NFL history to score 1,000 points in a career. Ray had a unique kicking style as in upon crossing the out of bound line onto the field he always looked down never raising his head until after the kick. 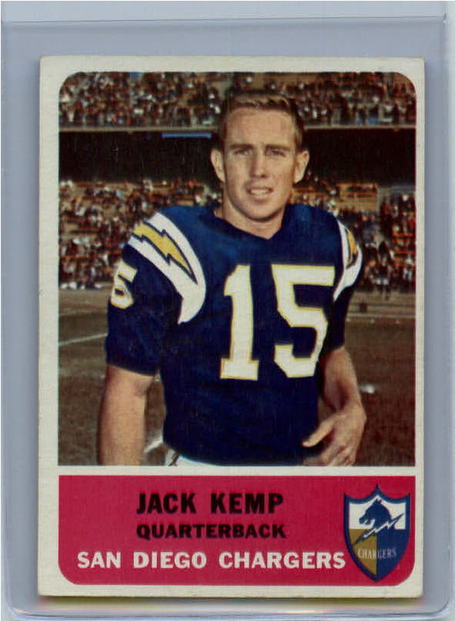 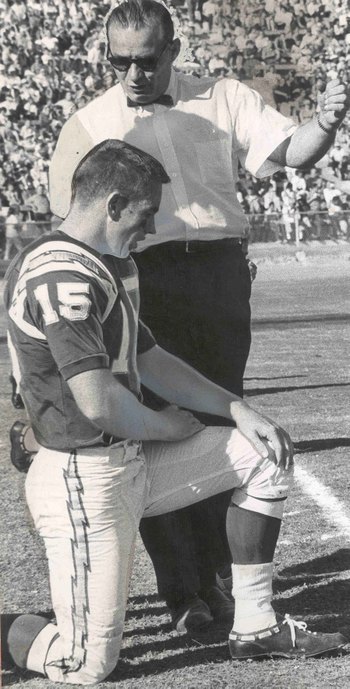 Jack Kemp, QB. With a haircut you could set your watch to, and a brain that made him even more famous after football, Kemp was without a doubt one of the best quarterbacks of his era.  First, the stats:

To avoid any confusion, LAC stands for "Los Angeles Chargers".  Those numbers may not seem like much in today's pass-happy league, but they were impressive.  Double-impressive considering he was a rookie in 1960.  In 1960 he was a first-team All Pro and in 1961 he was a Pro Bowler.  In a boneheaded attempt to "hide" Kemp after he broke his finger in 1962, coach Sid Gillman placed Kemp on waivers.  He was claimed by the Buffalo Bills, who only had to pay a $100 waiver fee to get him.  He was the starting QB for the Bills for six seasons afterwards, making the Pro Bowl in five of those seasons.

However, for all his accomplishments in the AFL, Kemp is probably best known for his own political career.  He spent eighteen years as a part of Congress before a presidential bid in 1988.  After losing due to a messy campaign, Jack was named to George H.W. Bush's cabinet as the Secretary of Housing and Urban Development.  Kemp later ran as the Vice Presential candidate for Bob Dole in the 1996 election against Bill Clinton.

The timing of Kemp's death, January of 2009, is especially upsetting considering the AFL celebration that will go on throughout the 2009 NFL season.  Kemp is one of the two or three greatest quarterbacks in AFL history and was a big part of the Chargers' early history.  We'll remember him here, as he will represent Chargers jersey #15.