Chargers By The (Jersey) Numbers: #14

Share All sharing options for: Chargers By The (Jersey) Numbers: #14

Let the madness begin!  There will be no nominees for #14.  As a matter of fact, only two players have ever worn it for the Chargers.  One was legendary and the other was a QB who threw 5 TDs against 17 interceptions in three years as the backup QB.  We're heading straight to the winner. 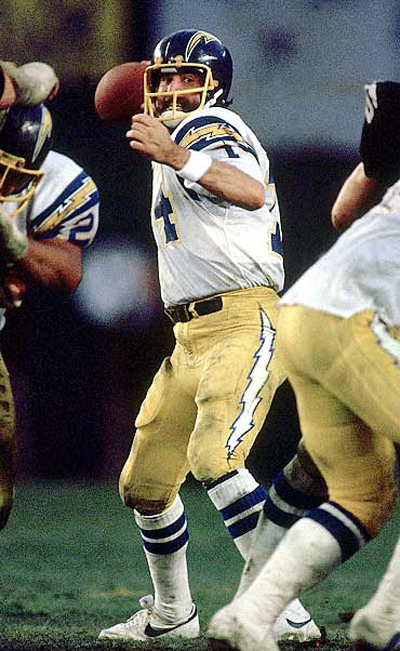 Dan Fouts, QB.  Stats, memories and Fouts' place in Chargers history after the jump.  Post your favorite Fouts moments in the comments. 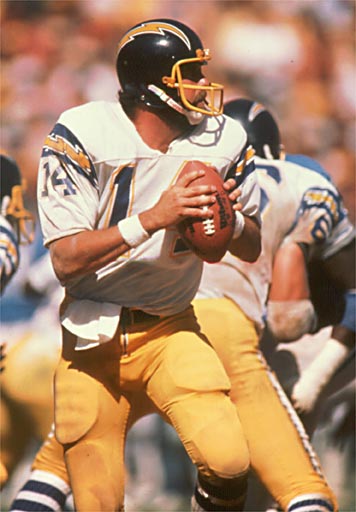 As good as Philip Rivers is, he still has a way to go to catch big Dan Fouts in terms of the best Chargers QB of all time.  Are they similar in terms of talent, guts and leadership?  Absolutely.  The thing holding Rivers back is that he has to show the same longevity that Fouts showed.  He needs to put up the stats over a long period of time.  Let's take a look at Fouts stats:

What I find so fascinating about that is all of his career bests happened in different seasons.  Fouts was so consistently good that he was topping himself in one way or another with every great season he had.  All in all, Dan made the Pro Bowl six times and was a two-time first-team All Pro.  He was inducted into the NFL Hall of Fame in 1993 and is one of only two Chargers players with a retired number.  In 1992, he was inducted into the University of Oregon and State of Oregon Sports Halls of Fame.

Dan Fouts is one of only seven quarterbacks in NFL history who have achieved two consecutive (back-to-back) 30-touchdown passing seasons.  He was also the third quarterback in NFL history to pass for 40,000 yards, after fellow Hall of Famers Johnny Unitas and Fran Tarkenton, and the first quarterback ever to throw for over 4,000 yards in back-to-back seasons (he actually did it three times in a row).  Quite simply, Dan Fouts is one of the greatest quarterbacks who has ever played in the NFL and he does not get enough credit for it.  He probably never will.  Chargers fans will give him the credit though, not just for being a great passer but for being tough as nails and being the leader of some great Chargers teams.  So, as I said before the jump, use the comments section to talk about how much you loved watching Fouts lead the Bolts and what you're favorite Fouts memories are.