Chargers By The (Jersey) Numbers: #8

Share All sharing options for: Chargers By The (Jersey) Numbers: #8

Sorry for the late start to the day.  Saturday night was a looong night that I'm still recovering from.  I have some really good stuff planned for this upcoming week so stay tuned, but for now we'll move on with the jersey numbers series.

Let's start by officially naming Doug Flutie the representative for jersey #7.  I actually voted for Volek and was quite surprised at the result, but what do I know?  Flutie did bring hope to a very hopeless organization, so he certainly deserves it.

Although there have been some great quarterbacks in NFL history to wear the number 8 (Steve Young and Mark Brunell come to mind), none of those players ever played for the Chargers.  After a battle between QBs for #7, we're back to the special teams guys as the main nominees to represent jersey #8.

Five Chargers' players have worn the number 8 jersey and three of those players only spent one season with the team.  This makes them the least-likely winners, so we'll get them out of the way quickly:

I apologize for the lack of a picture, but I simply could not find one.  Jeff West played during an era (1975-1985) before every player was having his picture taken and also before anyone cared about punters.  He punted for the Chargers for four years, from 1976-1979, before punting for the Seahawks for another five.  West finished his career with a 38.1 Yds/P average and had some of his worst years statistically with the Chargers. 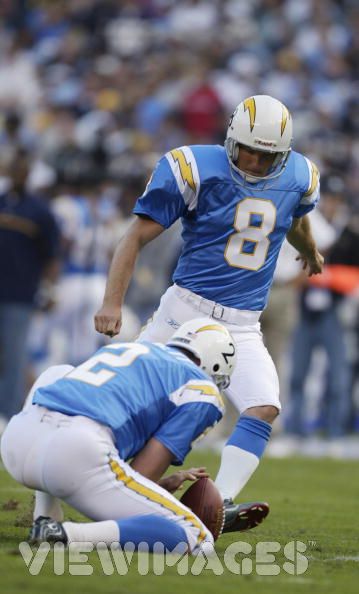 Here's another Flutie-like situation.  Steve Christie was a fantastic kicker and may even make it into the NFL hall of fame one day (more on this in a second), but only came to the Chargers towards the end of his career when he had lost some power and accuracy.  After signing 11 weeks into the 2001 season, due to Wade Richey's lack of accuracy, Christie spent two more seasons as the Chargers kicker before being replaced by Nate Kaeding.  He wound up making 42 of 57 field goal attempts as a Charger, a FG percentage of 73.6%.  However, during his 15-year NFL career Steve Christie did some pretty spectacular things:

Pretty impressive, huh?  Steve Christie has a reputation in Buffalo as an accurate, strong-legged clutch kicker who was relatively unaffected by inclement weather.  You really can't give a kicker a better compliment than that.  In 2008, Steve Christie was signed to a one-day contract with the Bills so that he could formally retire as a Bill.  That's where he belongs as a player and he's even become a part of the University of Buffalo football community, doing color commentary on their locally-televised games.

So were his best years as a Charger?  No.  Nobody who wore #8 had better years than him though, and his overall resume is deserving of some sort of reward.  So Steve Christie wins and will represent the #8 Chargers jersey, becoming the fourth placekicker chosen.