Chargers By The (Jersey) Numbers: #7

Share All sharing options for: Chargers By The (Jersey) Numbers: #7

I'd like to start off by saying that I'm pleased with the positive response to this jersey number series. I'm having a great time doing it, not just remembering players that I had forgotten about but also learning more about the history of the San Diego Chargers than I ever knew before.

#7 is a big one. It signifies a turning point. Every jersey number before #7 has had no more than four players who had worn it, and most of them were half-year punters and kickers. We've now entered the territory of more nominees and more quarterbacks! Everyone loves debating the talent of quarterbacks. Also, #7 will be the first winner to be chosen by reader vote! So click the link below the poll to delve into our group of #7s, hear arguments for each nominee and to see a rundown of the winners for numbers 1 through 6.

Before the #7 we never had a number that was worn by more than four players. With lots of people believing the number 7 to be lucky, there were a whopping EIGHT Chargers players that wore the #7 jersey. Unfortunately, that does not mean that there was a clear-cut, legendary winner. Those will come in a run from numbers 14 through 21 (I think they're all locked up already).

So, a rundown of the lesser #7s in Chargers history:

And then there were two. Two quarterbacks, of which I'm having a hard time deciding between. So...for the first time in this series....it's time for a vote! Let's get to the nominees: 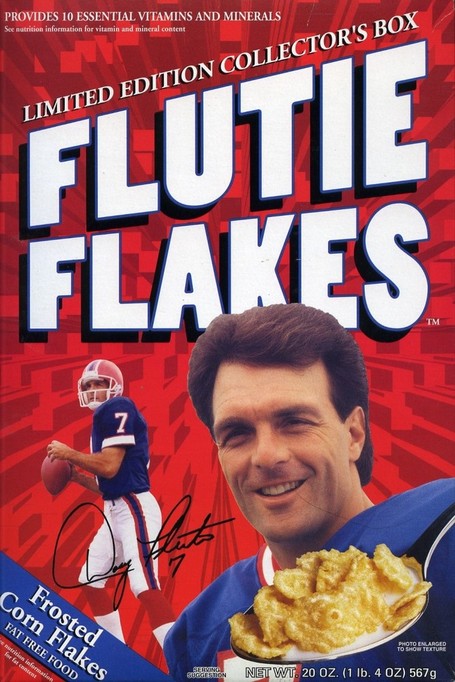 I remember the moment I decided that Flutie was exactly what the Chargers needed. It was week 7 of the 2000 season, in which the Chargers finished 1-15 but seemingly should've won 7 or 8 games. The defense simply could not stop anybody in the 4th quarter. Against the Bills, the Chargers were playing well on both ends of the ball going into the 4th. They were battering starter Rob Johnson with 4 sacks and plenty of "forced passes", resulting in an INT for Rodney Harrison. With the Chargers up 24-14 mid-way through the 4th, the Chargers' defense knocked Johnson out of the game and Flutie came in.

Now, I had seen plenty of Flutie highlights but had never actually watched a game in which he was playing. This was right around the time Flutie Flakes were coming out and Flutie Fever was hitting Buffalo, with fans wanting Rob Johnson benched in favor of the 5'10" cannon-armed Flutie. I remember being most impressed by Doug Flutie's demeanor. I remember the camera focusing on him as the Bills sliced through the Chargers defense with ease. It was obvious that in the huddle he was telling jokes. His team was down 10 in the 4th quarter and he was telling jokes! It was amazing to see the entire Chargers team tighten, offense (2 INTs by Harbaugh) and defense, while at the same time watching the entire Bills team loosen up. They were down 10 mid-way through the 4th and Flutie had convinced them that they were going to win the game! I was watching the game with my father, uncle and grandfather and I was screaming "That's what we need! He KNOWS they're going to win!" I was right. Although he only threw 3 passes, completing 2, Flutie changed the course of that game with his confidence. The Bills wound up sending the game into overtime and winning on a Steve Christie field goal.

I thought that was the most important game of that season. It was the best chance the Chargers had at turning the season around, and they were defeated by the opponent's poise. Following that season the Chargers brought in as many pieces from Buffalo as they could. John Butler and AJ Smith came over from Buffalo's front office, bringing Flutie and Marcellus Wiley with them. Christie was signed the following year once he became a free agent.

In his four years with the Chargers, Doug Flutie started 22 games and the team went 8-14 in those games. His completion percentage was never above 56%, which is much lower than where you want it to be, and he threw almost as many interceptions (22) and he did touchdowns (25). His stats don't matter much though. What Flutie brought to the Chargers was moxie, when the team needed it the most. Also, while I thought it was selfish at the time for him to not coddle Brees, I think he helped Drew Brees a lot by basically telling him "You have to earn your spot in this league." Doug Flutie was an integral part in turning the Chargers around from a laughing stock of the league into a perennial powerhouse, even if his numbers don't back it up. For that reason he should be considered to represent the #7 jersey. 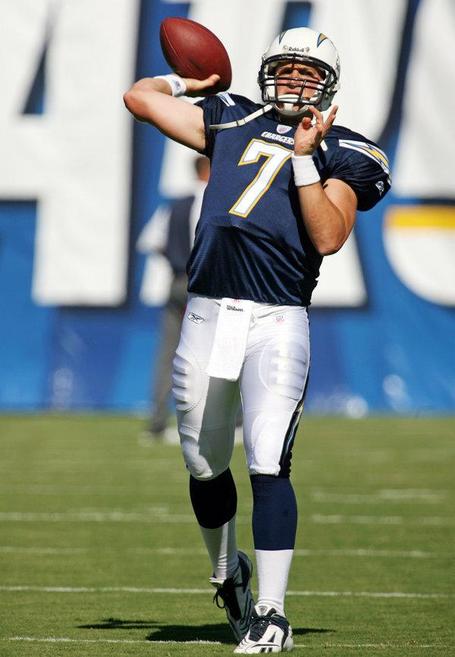 This one is tricky. How much does one game matter if it's not the Super Bowl? Cowboys fans would argue that Clint Longley deserves a place in their history for his performance on Thanksgiving, 1974. I'll argue that in one drive against the Colts in the playoffs, Volek let the NFL know that the Chargers were a force to be reckoned with.

Under Marty Schottenheimer, the Chargers were seen as a team that could win games during the regular season while playing in a weak division. However, come playoff time they were pushovers that would never pull off a tough win against a quality opponent. In 2007, that all changed. In the first round of the playoffs the Chargers face the Titans, who had made the playoffs for the first time in four years despite finishing 3rd in their own division. They were lead by Vince Young, who was getting victories by the skin of his teeth despite his poor completion percentage. Although it was a playoff victory, beating the Titans was almost expected due to the number of flaws there was in their offense. Facing the Colts was a different story.

The 2007 Colts were defending Super Bowl Champions. Although the Chargers had beaten them earlier in the season, proving the Peyton Manning had difficulty with 3-4 defenses, nobody was giving them a puncher's chance against the Colts in the playoffs. After all, the Chargers were the team that folded in the playoffs unless they were facing severely flawed opponents like the Titans. Going in as underdogs, the Chargers hit roadblock after roadblock but overcame them time and time again. After LaDainian Tomlinson left the game with an injury after just 7 carries, Michael Turner filled in with 71 yards on 17 carries. Darren Sproles helped to carry some of the load as well, turning a screen pass into a 56 yard TD to regain the lead in the 3rd quarter.

Then, in the 4th quarter with the Chargers up 21-17, the team was dealt two big blows. The first was to their quarterback, who had been getting better as a passer and a leader throughout the season. This Colts game was maybe Rivers' best of the season, completing 14-of-19 passes for 264 yards and 3 TDs (with only one pick). After his knee buckled and he was taken out of the game, the Chargers quickly punted the ball to the Colts and held their breath. Peyton Manning, smelling blood, threw a 55-yard laser TD pass to Anthony Gonzalez to give the Colts the lead. The fate of the game, and the Chargers playoff reputation, lie in the hands of Billy Volek. Billy responded wonderfully, going 3-for-3 on the final drive and running in the game-winning TD himself. It was a statement game. The San Diego Chargers would be playoff chumps no more. They had defeated the defending Super Bowl Champs on the road while dealing with a litany of injuries and bad luck.

You could argue that if that drive is never made, the Chargers might not have had the guts or belief in themselves to come back and win the division last year. And they might not have had what it took to beat the Colts again in the 2008 playoffs, this time in overtime. The Chargers are now thought of as Super Bowl contenders not just because of their roster or their history of recent regular season success, but because they've shown they're a tough opponent to face in the playoffs. Billy Volek played a crucial role in that.

So....which is more important to you? The quarterback who started for a 5-11 team but changed the attitude and atmosphere around the Chargers or the quarterback who led the team on one of the biggest drives in franchise history to prove that they should be considered a tough playoff opponent?