Share All sharing options for: X's and O's - Jacob Hester

Stats are a funny thing.  I love stats, so much so that as a high schooler trying to decide what I wanted to be in life I strongly considered the idea of becoming a statistician.  Then I realized that I wasn't very good at math.  With that being said, I eat up stats as much as any fan of any sport.  Pro Football Reference is a site that I visit almost daily when looking for information about the Chargers as a team or individual players.

Usually before I get into my video tape analysis of a player in this X's and O's series I find as much statistical information about them as I possibly can and try and draw conclusions with that first.  Then I see if the video tape matches up to the assumptions I've made or contradicts them.  When it came to doing analysis for Clinton Hart and Eric Weddle, this worked well.  When doing the analysis for Jeromey Clary I avoided statistics, but could've used them to look at the offensive line as a whole because Clary was on the field for every offensive play.

Using statistics to describe what Jacob Hester was to the Chargers in 2008 is useless.  For most of the season he played fullback, a position that doesn't exactly fill up a stat sheet, and was only in the game sporadically since the Chargers played in so many 3-WR offensive sets.

What I can tell you from my memory is that I remember Hester being an odd weapon that may not have an equal in the NFL.  I don't mean he's the greatest player ever, but his skill set is one that may not be matched by another NFL player today.  From what I saw of him with the ball in his hands, he's quick and tough.  He lacks breakaway speed and he lacks any real jaw-dropping juke moves, but he runs intelligently and besides his first NFL carry he does a great job of securing the ball.  Jacob Hester managed to score two TDs in 2008, one rushing and one receiving, to go along with his 5.0 Rushing Yards Per Attempt.

However, Jacob Hester is not what we were hoping for in 2008 when the Chargers drafted him.  He was not a replacement for Michael Turner and he was not a powerful goal line runner.  Half-way through the 2008 season it was looking at though the Chargers wasted their draft pick, not to mention what they paid to move up to get Hester.  That's when Mike Tolbert was hurt.

Now, Norv Turner's offense doesn't need a fullback.  When Norv left San Diego to become the offensive coordinator for the Dolphins he was able to get career seasons out of Ricky Williams with no decent fullback on the roster.  LaDainian Tomlinson, though, has had his best years running behind the best fullback to play in the last decade (at least).  Having him behind a blocking fullback not only makes LT more effective, but it should keep him healthier and lengthen his career.  So when Tolbert was hurt, especially with LT struggling the way his was in 2008, the coaches looked for a replacement.  All free-agent fullbacks had been signed and when looking in at our roster, only two names made any sense: Hester and Manumaleuna.

The Chargers went with Hester for a number of reasons.  One, he's a rookie and not as used to his position as Manumaleuna.  Two, it's more important to have blocking at the line before you start working on backfield blocking.  Three, if Hester was not as good of a blocker as Tolbert (who was mediocre anyways) he still brought to the table his abilities as a running back.  This would force the defense to have to account for him as an offensive weapon more than they ever did with Neal (ever wonder why he was so open for screen passes?).

What Jacob Hester showed was maturity and grit.  He saw his opportunity to get on the field, since he wasn't replacing Tomlinson anytime soon, and took to it.  Was he the best blocker when he started out?  No, but he obviously worked at it because he progressed very quickly.  By the end of the year, I liked having him in the game on a running play because it was almost guaranteed that there'd be a hole for LT (or Sproles) to run through if you just followed Hester.  With Neal, it was guaranteed, but for an undersized rookie learning the position I liked what I was getting. 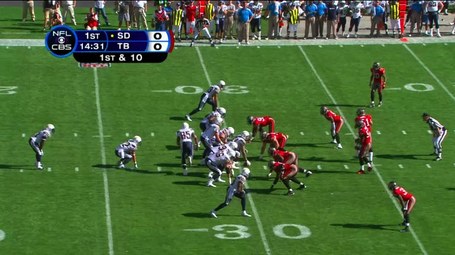 Standard I Formation.  Hester is in the standard FB position.  Gates is sliding down the line to help with blocking on the left side. 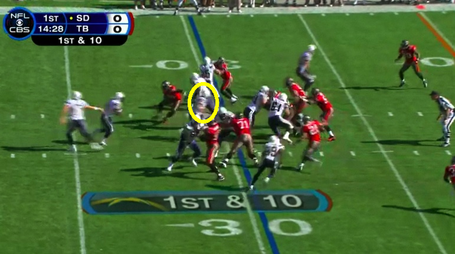 The play has started.  It looks like McNeil has completely missed his block, and he kind of has, but Hardwick and Mruczkowski have caught up three Bucs and opened a big hole in the line which allows LT to fly past McNeil's guy and keep the play moving.  LT is following Hester, who at this stage is looking for the best hole and the best Buc to block.  This simple action is something that Lorenzo Neal used to be able to do in his sleep, so Hester may be slowing down the play by having to think his way through it. 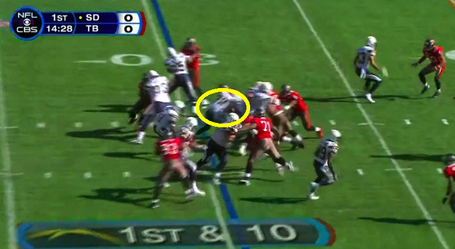 Hester chooses left and one of the three Bucs that were caught up comes into his sight to be blocked.  However, since Hester was standing tall with his head up trying to decide where to go, he is left unprepared for this blocker.  He hits him and holds him, but fails to drive the defender back.  Now LT is slowing down to find a new hole (since the one Hester was trying to create has been filled) and has to work to get around Hester.  Slowing down near the line of scrimmage is obviously bad news because it allows the defense to converge on the ball carrier. 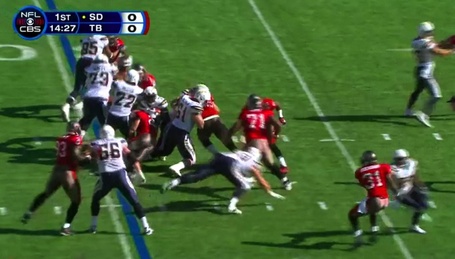 Here's the outcome.  Roughly a yard past the line of the scrimmage Hester is now being pushed back in LT, who was caught by a cornerback coming down the line when the play slowed up. 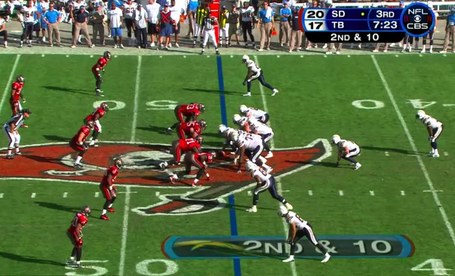 This is a variation on the Strong I Formation.  Hester and Gates are on the same side of the field, but Gates is lined up as a slot receiver instead of a Tight End.  Considering Gates, a notoriously weak blocker, is matched up against Derrick Brooks this play could really go either way. 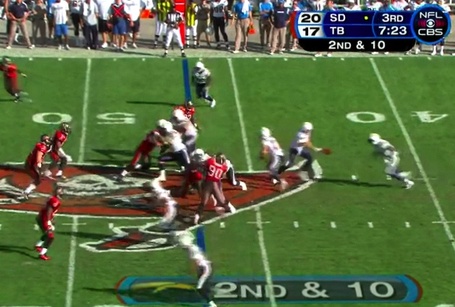 The design of the play is a counter to the right and outside.  The ball carrier fakes left, the line blocks left and Hester picks up the left end.  The receiver on the right breaks left and LT should be able to run around the right side into the secondary to face a safety or corner. 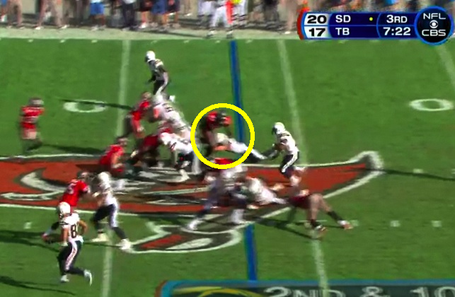 Hester goes low and knocks over the left Defensive End, leaving the right side wide open.  Unfortunately, at this point Hester was new at the position and had failed earlier in the game so LT trusts his instincts instead of his blocker.  Tomlinson goes left, where not only is a linebacker coming at him unblocked but Mruczkowski has fallen over and left a defensive tackle unblocked at the line of scrimmage to eat LT up. 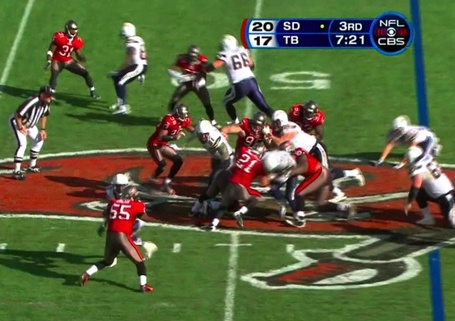 The result of the play, as predicted, is that after three yards Tomlinson is swallowed up by a defensive tackle, a safety and a linebacker all at the same time.  This play had much more potential if Tomlinson had trusted Hester as much as he trusted Neal in previous seasons. 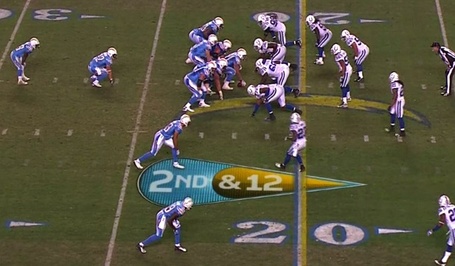 Standard I Formation again.  This time it's Sproles lined up as the halfback, with Tomlinson on the sideline with a groin injury.  Notice the Colts are looking for the run.  They have eight in the box plus the nickel corner is playing the line, so they practically have nine in the box. 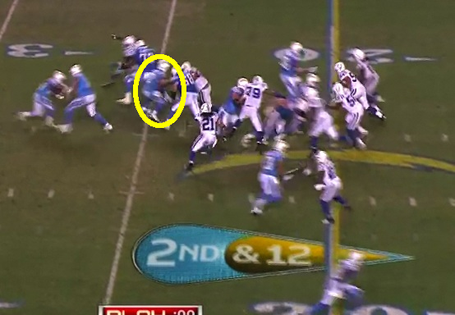 Here's a big difference in Hester's early blocking against his blocking late in the season and in the playoffs.  Hester quickly finds the hole made on the left side of the line (made by Freeney going outside to rush the passer) and keeps himself low while he makes his way into the secondary.  He made his decision quickly and maintained his power throughout.  That second part is particularly important considering Hester's small size (in comparison to other FBs). 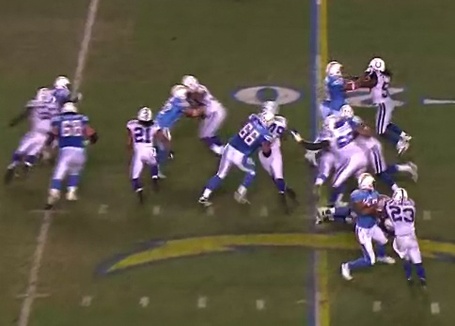 Point of impact.  Hester knows this play is to the outside and knows that the most important person to block is the outside linebacker on that side.  Sanders has to readjust his route to the ball carrier to get around Hester and Keiaho, effectively putting him in a position where he can only attempt to catch Sproles from behind (which is a tough task). 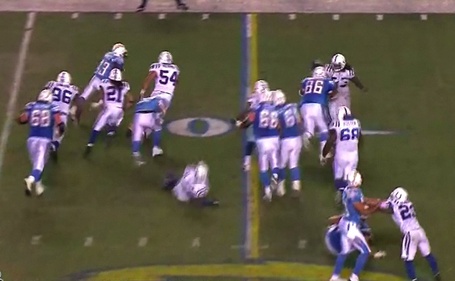 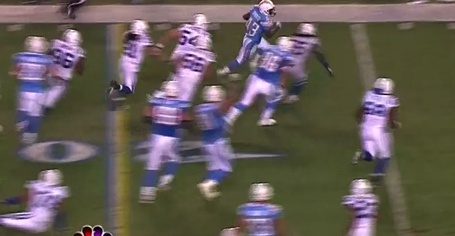 Due to Sproles' unbelievable speed, putting defenders in a position where they're trying to catch him from behind is to essentially take them out of the play altogether.  With nobody in front of him Sproles has a clear path to the end zone to win an amazing playoff game against the Colts.