Chargers By The (Jersey) Numbers: #6

Share All sharing options for: Chargers By The (Jersey) Numbers: #6

After taking a day off to organize my info, I'm back with another jersey number and boy will these things be easy to research now.  It used to take me over an hour to dig through old Chargers roster after old Chargers roster, all the while worrying about missing some wide receiver or defensive back that had a low number.  We weren't even in the teens yet and I was panicked at what laid ahead.  Now I got all of my info together and will be able to keep track of it thanks to a helpful spreadsheet sent over by reader Diesel85.  So.....take a deep breath, remember that it's Friday and let's get on with jersey #6.

I'm letting you know right now, that it's going to be hard for me to not give this one to Charlie Whitehurst.  There's not another player in the NFL that can handle a clipboard or grow a beard like CW.  I could be wrong but I think he even made the Pro Bowl once or twice as the third string QB, just so he could call plays in to the QBs that were on the field.  He's that good at it.  I've also heard that Charlie once wrestled a bear, won and then bought that bear a steak dinner.  It could be a lie, but I doubt it.  What a man.

All jokes aside, Charlie is the second best candidate to represent #6.  I'm not joking.  Since only four Chargers players have ever donned a blue and gold #6 jersey, let's run each of them down.

Nate Turner was a wide receiver with prototypical size out of UNLV.  At 6'3", 210lbs all he needed was speed, hands and route-running skills.  From what I can tell, Nate Turner wore #6 in training camp before making the 2001 Chargers.  He was then inactive for one game before being cut and never getting another chance at the NFL again, so his "official" jersey number was never properly recorded.  I'm assuming he didn't have the speed, hands or route-running skills to go with his size.

Steve DeLine was a kicked out of Colorado State.  In 1988 he played five games with the Chargers, making 6 of his 8 field goal attempts and going a perfect 12-for-12 on extra points.  Not too shabby.  The following year Steve kicked for the Phildelphia Eagles and did not have the same success.  After making only 3 of his first 7 field goal attempts, DeLine was cut by the Eagles and never seen again in the NFL.

So now we get back to Chucky Whitehurst, son of former Green Bay Packers quarterback Davis Whitehurst.  Charlie is loved by a great deal of Clemson Tigers fans because of his heart as well as his abilities as a passer and a runner.  Charlie led the Tigers to a 4-0 record against the rival South Carolina Gamecocks during his tenure there.  He was brought on to eventually be Rivers' backup when Brees departed, but unlucky for him that offseason also landed the Chargers Billy Volek (a proven backup) for cheap and Charlie was sent back to third string.  His professional statline?  Zero passes thrown in two appearances.  Those two appearances were two runs in 2006, one being a 14 yard TD run and the other being for a loss of one yard.  While he certainly has potential, it has yet to equate to much of a positive effect on the field. 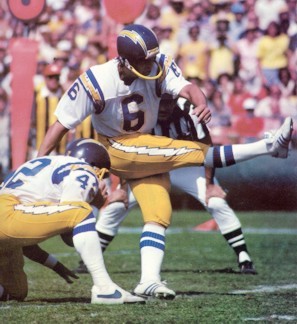 That's right, it's Rolf!  One of the longest-tenured and most successful kickers in Chargers' history.  Benirschke played his entire ten-year NFL career (1977-1986) with the San Diego Chargers, making the Pro Bowl once in 1982.  While playing in 121 total games, Rolf kicked over 200 field goal attempts and finished with a FG% of 70.2.

In a 1981, Rolf Benirschke's 29-yard field goal with 1:08 left in overtime gave San Diego a 41-38 victory over Miami in the highest-scoring playoff game in NFL history at that time.

I don't think there's much question that Rolf is one of the top three kickers the San Diego Chargers have ever had.  When we get to the third one, expect a vote on which one is the best.  While I continue with this list we'll begin the process of building a 53 man roster from it, with starters and backups at each position.  Should be fun.