Chargers By The (Jersey) Numbers: #4

Share All sharing options for: Chargers By The (Jersey) Numbers: #4

We're back with jersey number 4, but the problems remain the same.  Although I guess I shouldn't call them problems.  If nothing else, the Chargers have a history of long-tenured kickers and punters that have led to some of these lower numbers being worn very infrequently.  We should be thankful that we're not in the same boat with some other teams that struggle to find a kicker before settling on Morten Andersen, or struggle to find a punter that can kick the ball straight.  Except for a short stint with Wade Richey, the Chargers special teams players have been excellent for a long time.

With that being said....the final tally for Chargers players who have worn #4?  Three, with none of them playing more than a season with the Chargers.  Even so....one of those three ex-players will be representing #4 on our list until someone comes along and takes it from them.  Let's have a look at the candidates....

We'll start with Jeff Gaffney, kicker.  He played three games with the 1987 Chargers team, making 3 of his 6 field goal attempts and 4 of his 5 extra point attempts.  You can see why he only stuck around for three games.  Not jersey-representing material.

Next up is George Roberts, punter.  After spending three respectable years as the Dolphins' punter, Roberts came over to the Chargers in 1981 and stuck around for all 16 games, punting 62 times and ending the year with a yds/punt average of 41.  Something must've happened after that though, as Roberts punted in only three games in 1982 with the Atlanta Falcons before never getting on the field again.  It sounds like he might've been injured to me, but I couldn't find any information on it.  Do any of our readers know what the fate of George Roberts was?

And finally, your winner... 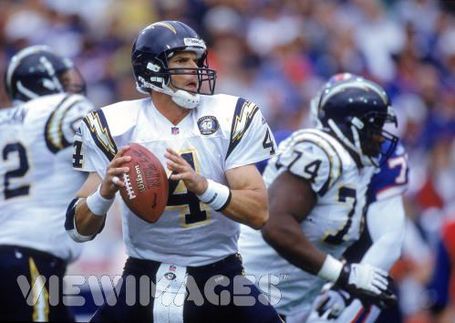 Captain Comeback himself!  Probably the only player to ever make Mike Riley look competent as a head coach.  After getting replaced by Peyton Manning in Indianapolis, Harbaugh became a decent journeyman quarterback.  He played a year in Baltimore, going 5-7 in 12 games, before coming to the Chargers.  I know this is a bit of a Steve Garvey situation, but he's still the best option.

1999 was Harbaugh's swan song.  With an unbelievably inept running game (leading rusher: Jermaine Fazande), nobody to throw the ball to (leading receiver: Jeff Graham) and a middle-of-the-pack defense, Harbaugh willed the team to 8-8 (6-6 in games he started) and 3rd place in the AFC West.  It wasn't pretty (10 TDs/14 INTs/70.6 QB Rating), but Harbaugh showed the Chargers that some heart and veteran leadership could equate to enough wins to be respectable.  In 2000, to try and appear that the pick was not wasted, the Chargers gave the starting quarterback job to Ryan Leaf and he quickly led the team to a 1-15 record.  Harbaugh played backup QB around the NFL for a couple more years before retiring to go into coaching.

That's the second part of this.  Harbaugh is the best coach the USD Toreros ever had, leading the team to a 29-6 record in his three years there and instilling a sense of honor to their football program.  He was hired by Stanford to try and turn their football program around and his first two years as their head coach he's shocked the football world with some major upsets.  He certainly has that program heading in the right direction and will most likely be on the sidelines of an NFL franchise soon.