Share All sharing options for: The San Diego Chargers' Top 10 Players for 2009 Success

With training camp only two months away and a roster that's mostly complete, I think it's time to rank the players that will mean the most to the success of the Chargers in the upcoming season.  These are players that I believe can, and will, step up their game in 2009 to help the Chargers get to where they want to be: 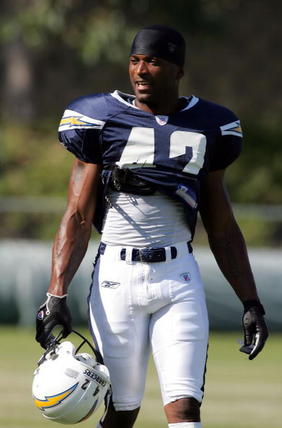 We've talked about it over and over and over and over again.  Was Clinton's down year in 2008 because of the lack of a pass rush?  His age?  A gaping hole in his game that was finally found after a stellar 2007 season?  Speculation gets us nowhere.  What we do know is that Hart seems to be the front-runner for the starting Strong Safety job in 2009 and a return to his 2007 form would go a long way towards re-solidifying the defense. 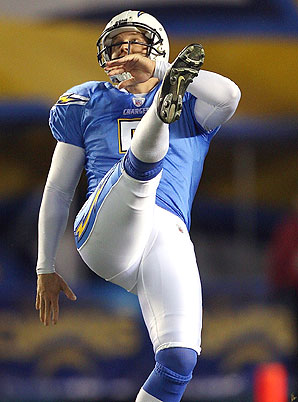 For as much as the offense seemed to sputter in the first half of every game last season, Scifres wound up punting only 51 times over the course of the season.  That is way down from his previous low (69 times in '04 and '06) and nearly half the amount of punts kicked in 2007 (81).  Looking at it in terms of offense, those numbers don't make sense.  But the increase in punts was caused by our defense, which led the league in takeaways in 2007 and had a lot of stops as well, creating more offensive opportunities.  If the offense and defense play the way they're supposed to, a lot of big plays are going to be determined by the right leg of Mike Scifres. 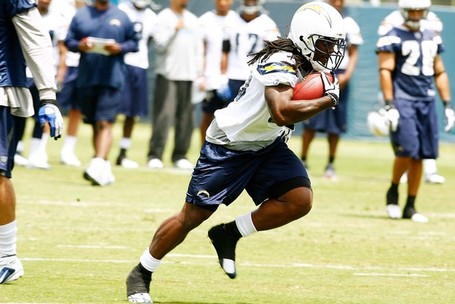 Now that's what I'm talking about!  Impact rookies!  Look, I don't mean to be rude, but if you think that Gartrell isn't going to be seeing a lot of time on the field this season you're nuts.  The Chargers management always realized that it would probably benefit LT to have a power back to handle the short-yardage situations and put-the-game-away situations.  The problem was that the coaches loved the idea of LT getting the ball in his hands.  Not only was he a lock to get that one or two yards, there was a chance he was going to break a big run!  This coaching style drove away Jesse Chatman (4.3 Yds/Car in 2004) and Michael Turner (6.3 Yds/Car in 2006).  The compliments just didn't get the ball in their hands enough.  Finally, when management said "to hell with it, LT or bust!", we got bust.  LT wound up playing injured all year and being completely ineffective or absent during the playoffs.  We had no way to get the short-yardage by way of the run.  The offensive line turned into a decent pass-blocking line instead of a bull-rushing one.  Gartrell is here to change that.  I'm looking for 120-150 carries from him, a Yds/Car average over 4, a more balanced offense and 3 healthy HBs going into the playoffs. 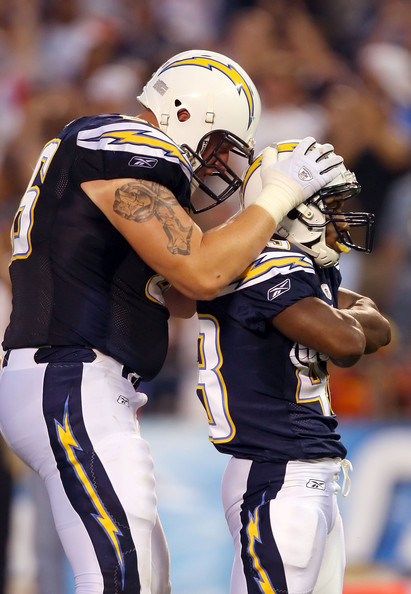 Another player/position that's been talked to death.  After reading this article, I know why the team loves Clary.  Is he the second-coming of Ogden, Pace or even Marcus McNeil?  No.  Clary has the size and the skills, but it's his motor and his work ethic that's going to keep him progressing into a better right tackle year in and year out.  It's important in 2009 that the Chargers find a little more balance on their line and Clary is a big part of that.  How he progresses this season could be the difference between him leaving town or being the Chargers' right tackle for the next 10 years.  A.J. Smith sure seems to love the kid, and that's a man who has a history of finding great offensive linemen. 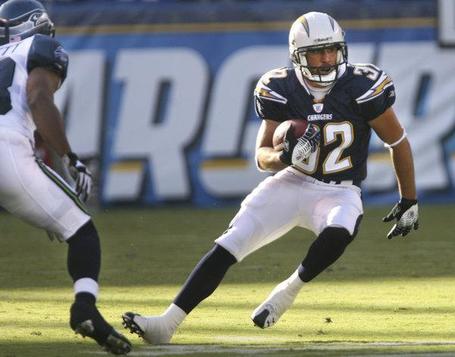 Are you ready for it?  Can you feel it coming?  Weddle's break-out season is only a couple months away.  Since doing the X's and O's analysis of Weddle, I have gone back and watched more of the guy.  And I noticed one of those traits that the Chargers management loves about him.  One of those reasons that was given as to why we traded so much to ensure that we got him.  Eric Weddle just gets it.  The opposition finds a hole in his game and exploits it, then that hole disappears.  Instead of working at getting better at what he's already good at (tackling, blitzing, underneath coverage), he works hard to remove his weaknesses (jump balls, biting on play-action, teeth-rattling hits) and becomes a more complete player because of it.  The Eric Weddle I saw towards the end of the season was almost a different player completely than the one who was beaten at the end of the Carolina game.  With intelligence, hard work and a great pair of hands I think the Chargers have found themselves a gem of a safety.  In 2009 I am expecting him to not only become one of the defensive leaders (we have a lot), but one of the biggest defensive weapons we have. 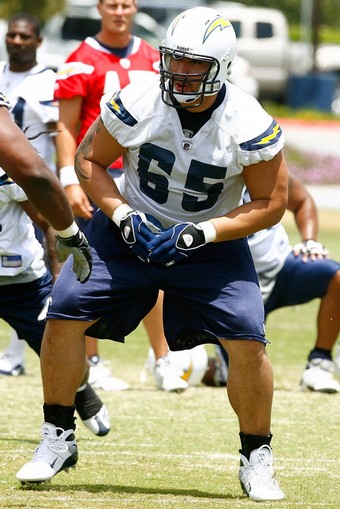 I know, I know.  Two impact rookies.  I'll admit, though, that I'm not sold on Kynan Forney.  Even as a project, if there wasn't something potentially wrong with his health long-term I feel that he would've gotten a better offer than what the Chargers signed him for.  I also think that if management trusted him to return to form, Vasquez would not have been drafted.  Now, onto Vasquez.  That is a big, strong boy.  Not Two-Ton Fonoti big either.  Louis Vasquez is a brick wall, which is exactly what you want out of your right guard.  He doesn't necessary need to have the best footwork, he just needs to be able to steamroll a defensive tackle when a running play is coming his way.  I love his potential and think he's starting in week 1.  Young offensive linemen can really help invigorate the group and provide offensive options that weren't there before.  The Chargers went from 9 wins to 14 wins in one season with the only changes being McNeil, McCree and Rivers.  I think we could see a similar situation in 2009. 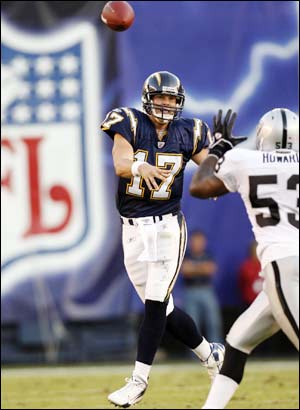 After three years as the starting quarterback for the Chargers, here are Rivers' QB ratings: 92.0, 82.4, 105.5.  I love that 105.5.  However, Chargers fan have noticed something about Rivers in these past few years: Rivers typically plays much better in the second half, especially if the team is losing.  That's something that needs to change.  What I'm looking for out of Philip in 2009 and beyond is consistency.  Sure, I love knowing that if we're down in the 4th quarter he has another gear.  It's Favre-like.  However, I'd prefer it more if Rivers could consistently get the Chargers the lead going into the half and rely on the running game/defense to close things out than playing catch-up.  For the sake of the health for myself and Chargers fans anyways.  After watching this team for the past few years, with Rivers as the QB, I recognized a trend.  I have no stats to back this up, but if the Chargers were tied or leading at halftime it seemed like a sure victory.  Even going into the locker room down by 3 typically resulted in a win, but it happened so infrequently.  I don't know if it's Norv's playcalling or Rivers lack of focus, but something needs to change so we can go from a team that wins by the skin of our teeth to one that wins dominantly. 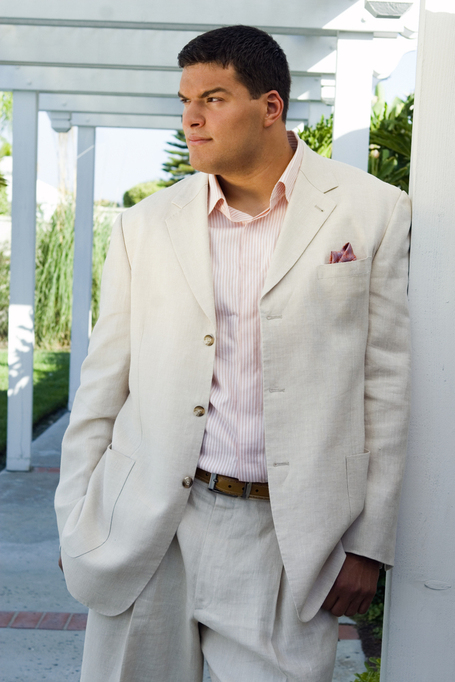 There's a reason I chose the above picture for Luis and football-related pictures for everyone else.  I don't think Luis is focused on football.  In my opinion, I think Luis needs to get hungry.  He came out of college and there were plenty of doubters.  After failing a steroids test as the combine, he had to prove that he could still produce the way he did in college.  In 2006 he had a fine year: effectively rushing the passer (3.5 sacks), dropping into coverage (3 passes defensed) and making plays (49 tackles, 1 force fumble).  Then in 2007 he unleashed himself: collecting 7 sacks, 1 interception, 1 defensed pass, 1 fumble recovery and 38 tackles.  After that season Castillo was locked up with a long-term, incentive-laden deal.  There's three theories I can have about why he's dropped off since.

Theory 1: Luis Castillo was taking steroids, even in the NFL.  After his 2007 season the testing became harder to get by and he stopped taking them.

Theory 2: Luis Castillo simply cannot play well unless he is 100% heathy, and nobody in the NFL is 100% healthy.

Theory 3: Luis Castillo has been unmotivated since proving his doubters wrong and getting his big contract.  He is driven more by personal accomplishments than team accomplishments and we can expect his next big season during his next contract year.

I'm a believer in theory 3.  It's the easiest one for me to swallow.  It's also the easiest one to solve.  Send coaches and players at him.  Merriman will yell at Castillo all day until he realizes that Shawne will slit his throat if Castillo doesn't give 150% effort.  Have A.J. Smith text Luis with reminders of big bonuses in his contract for being Super Bowl MVP.  Kidnap his family (Ed's note: don't kidnap Luis' family) and make him angry.  Light the fire that turns Castillo into one of the best 3-4 DEs in the game and it'll make the difference of 2-3 wins. 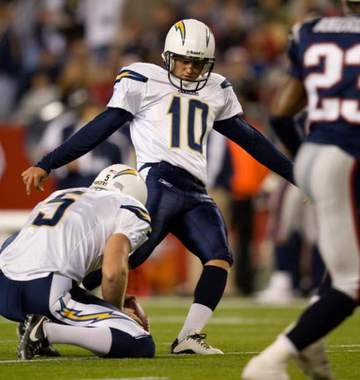 This is a big, big year for the player my wife likes to call "Baby Kaeding".  Check out this chart:

So part of Kaeding posting his lowest FG% since his rookie year was the fact that he seems to be losing leg power, which he didn't have a ton of to begin with.  Before 2008 he was never worse than 72.7% on field goals longer than 40 yards.  In 2008 he made 40+yd field goals at a 44.4% rate.  Not only that, he has never shown above-average power on kickoffs.  He's probably below-average actually.  So essentially the Chargers have themselves a younger Morten Andersen.  One more season like 2008 and A.J. Smith will go looking for new kickers in the draft.  One reason for optimism is at the Twitter for the National Kicking Combine Series, who posted this:

Worked with Chargers' kicker Nate Kaeding. Changed his kickoff steps. He is already seeing improvement. Keeping energy through to the ball. 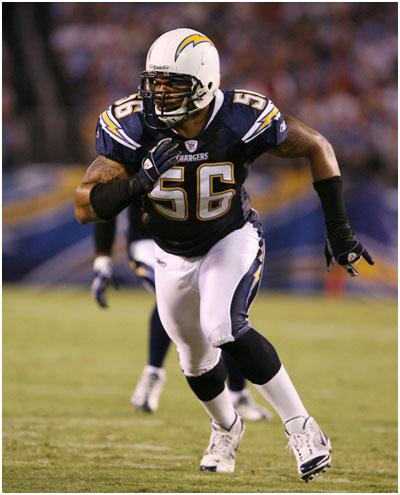 This one was probably obvious.  The biggest area for improvement this offseason is the passrush.  The best thing we could do to improve our pass rush is bring in the best 3-4 OLB in the NFL today.  My predictions for Merriman's 2009 season: lots of offensive linemen will go after his knee and it will result in a handful of easy sacks, he will get better as the season goes on, he'll take off the week 17 game against the Redskins to rest his knee and he'll finish the season among the top 10 in sacks.