Chargers By The (Jersey) Numbers: #2

Share All sharing options for: Chargers By The (Jersey) Numbers: #2

Now this is a fairly obvious choice.  As far as I can tell, only one Chargers player has ever worn #2 and he was a heck of a player at that.  Correction, Ralf Mojsiejenko also wore #2 as the Chargers punter in the mid-80s (HT: Citer).  However, he was not good enough to be chosen ahead of.... 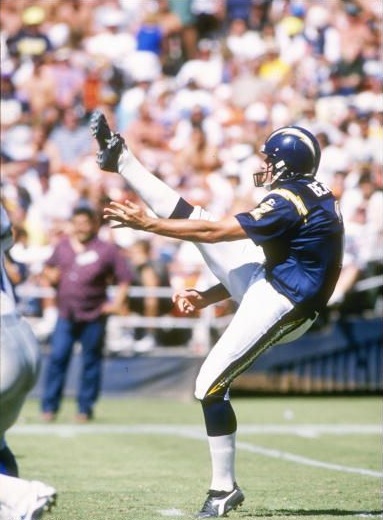 What I find most amazing about the Darren Bennett story is how stuck-in-their-ways NFL teams could be.  While honeymooning in California in 1994, after a few years of being interested in the NFL, Bennett managed to get a tryout with the Chargers.  His tryout was so impressive that the team immediately signed him...to the practice squad.  Now, I know what you're thinking.  "He's coming from Australian Rules football!  He needs to learn the game first!"  I think you're wrong.  How long did it take you to figure out what the punter's job was?  1 game?  2?  Catch the ball, kick the ball far.  Not that complicated.

Anyways, back when the NFL Europe worked as a petri dish for pet projects of NFL teams, Bennett was sent over to play for the Amsterdam Admirals.  In his one season as the Admirals' punter he lead the league in net punting average and was named to their all-league team.  Basically, he was too good to be wasting time in NFL Europe.  The player keeping Bennett from making the starting lineup?  Bryan Wagner and his 41.6 Yds/P average.

In 1995, at the age of 30, Darren Bennett became the Chargers starting punter and had his first Pro Bowl season (he would have only two).  Coming over from Aussie rules football, Darren liked contact.  This was evident in his rookie year when he knocked a punt returner out cold with a big hit.  Over nine seasons with the Chargers, Bennett never missed a game, was in the top 5 for Yds/P four times and had only 3 punts blocked (one of which happened when the Chargers only had 10 men on the field).

Perhaps most importantly, Darren Bennett was different from a lot of the other NFL players of today.  He liked to help out younger players and cared more for the team and victories than himself and his personal stats.  This has never been more true than when the Chargers drafted his eventual replacement, Mike Scifres, in the 2003 NFL Draft.  While continuing to be one of the league's best punters for the Chargers, Bennett took Scifres under his wing and taught him everything he knew.  A year later Bennett left via Free Agency to Minnesota, where he played one season before retiring, and the Chargers run as one of the league's best punting teams remained in tact.  Just the way Darren Bennett wanted it.