Chargers By The (Jersey) Numbers: #1

Share All sharing options for: Chargers By The (Jersey) Numbers: #1

Because I found this interesting, I've decided to copy the idea of another SB Nation blog and focus on jersey numbers of past and present Chargers players.  We'll make our way from 1-99 (hopefully doing one each day), choosing a Chargers player to represent each number.  We expect up to 99 disagreements with our choices for each jersey number, and look forward to the spirited debate.  We will keep a running list, and when appropriate, we will put up for a vote to see who really belongs on the list for the given number.  Let's start at the top with #1: 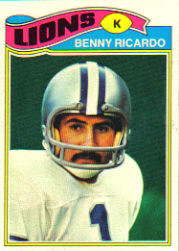 How could you forget Benny Ricardo?  In 1984 he played two games for the Chargers, going 3-3 on field goals and 5-6 on extra point attempts.  He's also a born-and-raised Southern Californian.  A product of Costa Mesa High School and San Diego State University, Ricardo played eight NFL seasons with 5 different teams.  He ended up with 447 career points and a FG percentage of 64.8%.

Benny Ricardo wins due to a surprisingly small group of Chargers players and ex-players that wore number 1.  A close runner-up was a early 90s punter by the name of Kent Sullivan who played in 3 games and had 15 total punts.

Actually, Ricardo and Kent were the only two Chargers players to ever wear #1.  Seems odd, doesn't it?  I could be wrong though, as I only searched through kickers, punters, and QBs in my search and I believe the uniform rules that limited the #1 to those positions didn't go into effect until the 80s (I was wrong. NFL uniform rules started in 1952, but were adjusted to become much more rigid in 1973).  So if you know any other past Chargers players that sported #1, by all means let me know in the comments.