I would first like to start by going over the "criteria" that has been set in place.

Place to stay: Since I would be coming from SoCal (Irvine to be exact), this is an important issue. Luckily, I have a multitude of options. I can stay with my sister in law, an old college classmate or even an old high school classmate. They all live in Manhattan, and I have stayed with all of them before. My fourth option would be to stay with my old college roommate. He is currently the wide receivers coach at Army in West Point, but it is only an hour train ride from the city. More on him later.

Getting to NYC: Getting a flight would be my biggest expense, but since I can stay for free at some ones place, and have a free ticket, price really won’t be a factor here. Also, I can fly out of LAX, so I will have plenty of flight options.

Open Bar: I am definitely of drinking age, so this won’t be a problem. Actually, I think this will be part of the solution!

Charger Fan: Hmm..lets see. I have been a fan of the Chargers ever since I can remember (probably at around age 10 or so). My brother was a season ticket holder last year, and so naturally he and I made it to almost all of the games together. Prior to last year, I tried to make it down to at least one game a year, and definitely didn’t miss any playoff games at the Q. One of my biggest hobbies is collecting media guides, yearbooks and programs from the Chargers. I have over 70 different historical Chargers documents, so as you can tell I have invested a lot of time, energy and money in the Chargers.

Cold Weather: I used to live in Chicago, so I am well accustomed to cold weather. I look forward to busting out my circa 1994 Chargers parka. It rarely gets any use anymore, what with the great weather in SoCal and the global warming thing. :D

Face/Chest Painting: See above…I will be wearing my parka…so this should not be a problem.

Now finally, back to my old college roommate (named Andy). Prior to last year, he was the wide receivers coach at Cal Poly SLO (SDSU football fans are well aware of this Div1AA powerhouse). Recently a CP receiver by the name of Ramses Barden was drafted by the Giants in the third round (the G-men even traded up to get to him). Ramses is a huge receiver, with the upside of being a Vincent Jackson/Malcom Floyd type. (It looks like he was drafted to replace Plaxico.)

So, back to the point, Andy is still in constant contact with Ramses, even more so now that they will be right down the river from each other. I have already asked to see if there was anyway I could get some tickets to the Chargers/Giants game and he is working on it but I am not holding my breath. Who knows how much clout rookies have.

Now Andy is from San Diego (played QB at Mission Bay HS) and even worked for the Chargers for a couple of summers during college, so needless to say he is a HUGE Chargers fan. While at Cal Poly, he had the opportunity to meet a lot of people in the Chargers organization for drafting purposes, and does have some good connections. If I do get picked for the free ticket, I will try with all my might to get Andy to set up a meet and greet with some Chargers players. This is what I can bring to the table if you pick me. Call it a bribe, but I prefer to call it gentle persuasion.

Thanks for your time. :D 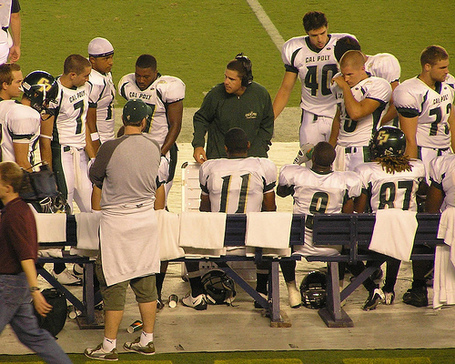 I found this pic from the Cal Poly v. SDSU game last year and figured I should post it. I am the one behind the bench looking on (field passes were incredible). Andy is the guy with the headset and Ramses Barden is #11.