Seriously, that's all I have to say.  This is a funny time of the year for me as a football fan and blogger.  Especially as a Chargers blogger.  We don't sign big free agents and AJ loves playing headgames by bringing in every NFL prospect under the sun, so entire weeks go by with no real news regarding the Chargers.  You think I'm joking?  Check out the newly redesigned Chargers.com and take a look at the most recent stories:

-Chambers reaches out to local youth

-April is postseason for Chargers' scouts

-Hart looks to bounce back

You get the idea.  There's nothing going on.  If I go looking for Chargers news somewhere besides Chargers.com all I see are articles telling me that the Chargers are bringing in some cornerbacks for workouts and that a newspaper in Seattle has a "Draft Preview" for the Chargers that I won't even bother to look at. And here we sit as Chargers fans, left to ponder the same questions over and over.  Here are our current questions:

-Will Sproles get more carries?

-Who will replace Igor?

-Who will replace Hart?

-Are they really starting Forney at RG?

-Are they really starting Burnett at ILB?

-How will Merriman be after surgery?

-How will McNeil be after surgery?

That's all of them.  And all of those questions are followed by "Who will we draft?"  The answer to all of them is completely up in the air right now.  AJ probably only has a preliminary draft board, if that.  I don't doubt that he's trying to get into the second round because it's the sweet spot for safeties, but I have no clue.  The first round of this draft is filled with so many "maybe" players that anybody could go anywhere.  If you think about it logically, we know absolutely nothing except that Merriman feels good and looks good.

This is clearly the doldrums of the season for us Chargers fans.  So I'm going to try my best to make it exciting with gadgets, jokes, house cleaning and PREDICTIONS! I'm going to be working in bullet points so I don't get lost.

Me: "Didn't the Chargers beat the Colts in the playoffs in each of the past 2 years?"

Me: "You bet your ass they did.  And haven't the Chargers beaten the Colts 3 out of the last 4 times they've played, with their one loss being by 3 points?

Me: "Yes they did!  And didn't the Colts just lose their number 2 receiver, the one whose own decline has matched the decline of the Colts offense, and THEIR HEAD COACH that they've credited with so much of their success?" 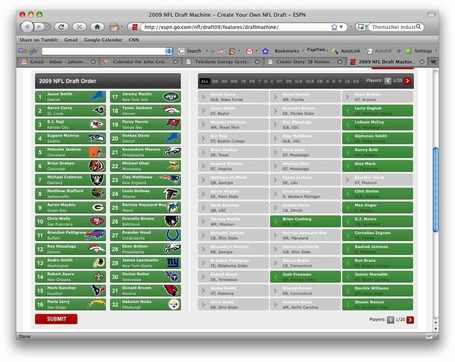