Share All sharing options for: Rundown of the Chargers Potential Impact UDFAs

Every year we get a UDFA who makes an impact.  Who is it going to be this year?  One of the main reason a pretty set team like the Chargers can sign 18 UDFAs is because all these kids know they will be given an honest shot at being the next Dielman, Gates, or Cooper.  No one wants to look through 18 guys who didn't get drafted, so let's look at a few of these guys and see if we can find some who seem like they might make an impact: 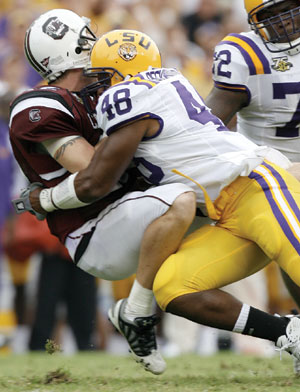 Projected around the 5th round, some projections had him as high as a 3rd rounder.  This guy is going to make the team and will probably make an impact.  He is a pretty good friend with the WR Byrd who we drafted in the 7th round (the guy in the hospital).  Good run stopper, might have some trouble in coverage.

Compares To: GARY BRACKETT, Indianapolis -- Beckwith is a smart, instinctive inside ruin stuffer, the type you want dealing with "inside trash" to free up other quicker defenders, but he lacks range and pass coverage skills to be exposed there as an every-down type of player. He's had several knee issues that will see his stock drop, and unless he gets into a system where his outside men can compensate for his deficiencies, he will be nothing more than a situational player. 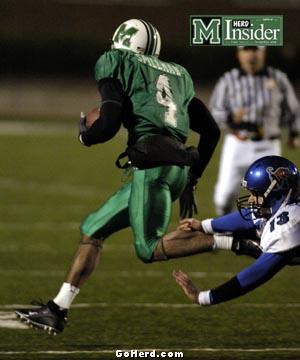 Projected to be a 5th rounder or so.  Good athlete, good tackler, doesn't play as fast as his times.  His dedication to football has been questioned.  He is a very good athlete and if he can pull it together, he could be a good project at the Safety position.

Positives: Solid free safety prospect with adequate size and good speed. Good backpedal, stays low and shows quick feet. Has fluid hips and short-area quickness to handle man coverage when needed. Can make a play in the air, high-pointing the ball. Comes downhill to hit receivers coming over the middle. Closes quickly on ballcarriers from the deep defensive backfield. Willing to take on fullback block to force play inside. Forces fumbles by putting a shoulder on the ball or stripping after the ballcarrier is held up. Gunner on special teams due to his size, speed and toughness.

Negatives: Will take false steps on play-action, but recovers adequately. Willing to hit a receiver off the line, but doesn't always use his hands to win the physical battle. Doesn't get off receiver blocks often enough. Must improve his hands for making an interception. More of a hitter than a form tackler, although he can wrap up on occasion. Will freelance, losing discipline to stay deeper than the deepest receiver. 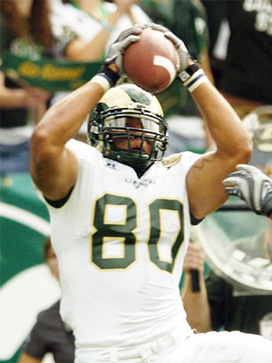 Pass catching tight end who really will need to work hard in order to play on the line in the NFL (rather than in an HBack role).  I suspect this guy is one of the reasons we released Chandler today.

Positives: Lanky, athletic build with room for additional muscle mass without a significant loss of quickness. Versatile athlete capable of lining up as a traditional tight end, H-back or even split out wide. Good initial burst to get off the snap. Gains a clean release off the line of scrimmage due to quick hands and agility. Good straight-line speed to challenge the seam. Natural receiver. Big, soft hands to make the secure catch. Rare body control for a player his size. Can contort in space to make the difficult grab. Can track the ball over either shoulder. Good quickness off the snap to get to the second level as a run blocker. Has the lateral agility to remain square to the defender in space.

Negatives: Only lined up in the traditional three-point stance half of the time and may struggle to make the transition to a more traditional pro-style offense. Inconsistent effort as a blocker, ducking his head too often in space and lacks the physical strength and technique to contribute much in this area. Relies on his athleticism, rather than sound route-running, to get open. Has to prove he's 100 percent recovered from the torn ACL that limited him to only two games in 2007.

Converted DL who played every position on the line but center.  Versatility. Dielman was a converted DL as well... Also, reminds me a little of a 300 pound Will Smith.. That's gotta count for something.

Positives: Aggressive. Attacks his opponent. Long arms, which he uses well to pop the defender. Good hand placement. Can latch on and take the defender for a ride when he keeps his feet moving. Strong hands and can drive defenders off the ball. Versatile. Has started games at all four exterior positions along the offensive line. Durable. Leaves with 34 consecutive games started.

Negatives: Top-heavy. Bends at the waist too often. Good upper-body strength to latch on, but doesn't keep his feet moving and is forced to lean on the defender. Defenders too easily slip off his blocks or force him to hold. Lacks the speed to consistently get to the second level and is forced to lunge at defenders.

So there you have it, 4 who might make an impact.  I think of our crew of 18 UDFAs, 1-3 will make the team.  I think Beckwith is one of them right now, so there are maybe two others who will make the team.  This is actually one of my favorite parts of the Draft weekend.  All these guys with chips on their shoulders getting signed for a pittance and trying to prove everyone wrong.  As stated elsewhere, I'm a little disappointed we didn't get an RB with some potential.  Curtis Brinkley may prove me wrong, hopefully he comes in angry and in shape.  We got some WRs with some potential, but I don't think we have any spots for a WR, but you never know.