Why We Need An Upgrade: There are a number of reasons why drafting a safety is necessary for the Chargers this year. The first is that Clinton Hart was atrocious in 2008, but he was already discussed in-depth here. The second is that I believe that with his size and abilities as a blocker, Eric Weddle is much better suited to slide over to the SS position. This was also discussed in-depth over here.

The other reasons for drafting a safety are the reasons for improving talent at any position on a football team: It helps the guys around the position. Picking up someone like Jenkins and moving him to FS, assuming he picks it up quickly, could make life much easier for Jammer, Cromartie, Cason, Weddle and our ILBs. Coverage sacks are important to a defense and they're created not by good DB coverage, but by good positioning by both safeties (and a QB who won't throw into double-coverage). A strong pass rush helps the secondary, but a strong secondary also helps the pass rush. We need more balance.

Also, there is too much turnover at our safety position. Did you realize the last time we had the same starters at both safety positions for longer than a year was in 2001/2002 with Rodney Harrison and Rogers Beckett? That's absurd. These two players are partners, each covering half of the field, and it works best if they know the tendencies of their partner. It's just like every other position group in the NFL, playing together longer makes you work together better.

Why We Don't Need An Upgrade: This was gone over in-depth here, but to summarize: I believe Clinton Hart is a an average Strong Safety. He plays the run fairly well and he's an average tackler (who can lay the occasional big hit). Hart can play the pass well, if he's in the proper position. However, if he's left to cover for more than a couple of seconds he'll usually find himself in the wrong position. His inability to stay in the proper position while watching the QB led to the majority of the big plays given up by our secondary in 2008.

However, we're expecting the pass rush to improve in 2009 with the return of Merriman and Ron Rivera calling all the plays. Not to mention any improvement we might get from rookies at ILB or RDE. So it's not too far-fetched to think that Clinton Hart may return to his 2007 form (5 INT, 1 Sk, 85 Tkl) if we left him as our starting Strong Safety.

The Argument For Jenkins: Malcolm Jenkins was a great college corner and has the skills to be a great NFL safety. He's big, he's strong, he's physical, he plays with intelligence and he has fantastic hands. Scouts like to point out that he likes to jump to defend a pass, he shows an explosive burst when he plants towards the action and he has a terrific sense of timing. These are all fantastic traits for a young safety to have.

Jenkins is known for being very good in run support, even being called a "big hitter". His only flaws as a cornerback (sometimes loses the ball when turning his hips, can sometimes fall asleep at the line, does not have recovery speed) can be erased if he moves to safety. Typically the play will be in front of him, there will be no competition of "who can get off the line first" and he'll have the jump on receivers so he won't need top recovery speed. Usually he'll be setting himself up with a slow backpedal and using that explosive burst off of the plant to head towards the ball in the air and steal it with his soft hands. 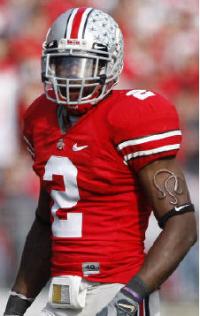 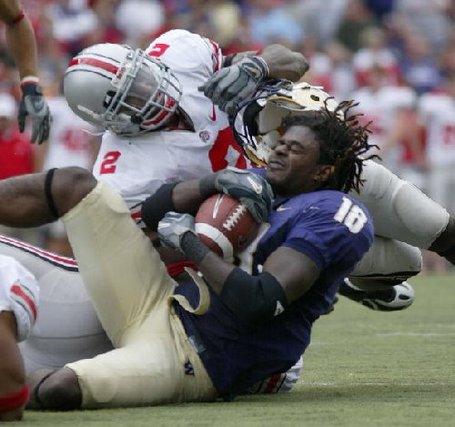 The Argument Against Jenkins: Speculation and money. Malcolm Jenkins has said publicly that if he is drafted as a safety, he'll play the position, but he believes that he's a corner and would prefer to be drafted to play corner. Does he believe that? Maybe, maybe not. Cornerbacks typically get more money than safeties in their rookie deals so it's possible he just wants to get the most money possible by trying to scare off teams that want him as a safety. From everything I read, Jenkins is a kid with his head on straight and prefers contributing to a winning team to anything else. If we draft him as a safety, he'll most likely play it with his mouth shut and do what he can. That doesn't mean he won't be looking for a job as a corner when that rookie deal is up though.

The other argument against Jenkins is the switch from corner to safety. There's no guarantee that he'll be as good of a safety as he is a corner. I can't speak one way or the other with any expertise on the matter, but it seems to me that corners that have been moved to safety in their rookie years have had a much easier time than safeties trying to switch to being cornerbacks. I'm confident that a young player that has shown the intelligence and maturity of Jenkins would have no problem making the switch with assistance from the coaches, Paul Oliver and Eric Weddle (who have both made the switch).

Fan's View: Courtesy of Sam from We Will Always Have Tempe, SB Nation's blog for Ohio State Buckeyes Fans:

Malcolm Jenkins is not a burner; that much is obvious when watching his game. What he is, however, is physical. In the Big Ten, physicality wins football games, and Jenkins was arguably the most physical - and thus most beloved - Ohio State corner since Antoine Winfield. But because he lacks elite top-end speed, many pro prospects now see him as a safety, largely as result of his mediocre 40 times - both in the 4.5 range - at the NFL Combine. While I don't think that the 40 is a good judge of NFL speed in any sense of the phrase, I do understand the decisions GMs have to make with regard to personnel, and many see Jenkins as a pro free safety, not unlike former Miami Hurricane Antrel Rolle, who has successfully made the transition to safety after spending his college days at corner.

Jenkins may lack in top-end speed, but he has plenty of football smarts. The guy excels at play recognition and flies to the ball; he's one of the best run-stuffing corners I've seen in my time following football. He's a solid tackler who would often have little to no trouble bringing down even the biggest of Big Ten running backs. In the passing game, Jenkins excels in zone and is merely very good in man. He reads the quarterbacks eyes very well and adjusts accordingly with an uncanny flow. In press coverage, he's very good at jamming receivers and throwing them off their routes. The reason pro teams lust after Jenkins as a safety is his zone coverage ability; he has the recognition skills and the inital burst to put an end to plays that occur underneath him. He simply doesn't bite on play-action fakes. He keeps his eyes on the quarterback at all times, and this makes him excellent in the deeper coverages he'll be playing at free safety. The primary weakness in his game is man coverage, in which he can get a little overconfident. In the rare times he does get beat, Jenkins has the acceleration and quickness to close the gap quickly; in my time watching him, he never got beat on a long, downfield pass, no matter how quick the opposing WR was.

Jenkins played both safety positions and mostly corner at Ohio State, so he understands the principles of all three fairly well. Thus, I expect his adjustment period to be limited; along with the usual time it takes rookies to adjust to the speed of the pro game, I would tack on a few games for learning the new position, but not nearly as long as Antrel Rolle, who essentially had to relearn coverages and assignments when he made the switch. Eventually, I could see Jenkins growing into an Antrel Rolle, perhaps even a Brian Dawkins-type ballhawk. He's probably the safest secondary pick coming out of college since LaRon Landry from LSU went to the Redskins a few years back.