Why We Need An Upgrade: Quite simply, because Igor Olshansky is gone via free agency. In the 3-4 defense the linebackers are very important, but the key to everything is the three down linemen. They have to not only take up multiple blockers and hold their ground to support the run but they also have to disrupt the occasional play and get into the backfield to keep the defense dynamic. Olshansky held his ground in run support, but he rarely took up multiple blockers and almost never found himself in the backfield. He was a poor pass rusher, even for a 3-4 DE.

Bringing in a talented DE to take his place would not only help improve our numbers, but it would balance out the defense. The defense would have to always account for that player with more than one blocker, taking pressure off of the rest of the Chargers defensive line as well as our pass-rushing OLBs. In summary, if we could put a Pro Bowl talent at our other DE position it would create chaos for any offensive opponent.

Why We Don't Need An Upgrade: Jacques Cesaire is good enough. I honestly believe that. When he got time on the field, especially as a starter, I always thought he was good enough. He's not great, he's not dynamic but he could become both of those things if he's given the starters spot for good. In 2006, Cesaire started 10 and picked up 4 sacks (beating Igor's career high of 3.5) to go along with 37 tackles. Naming Jacques as the starter also means we could use our #16 pick on somebody like Rey Maualuga or Michael Oher. Also, AJ Smith could use one of his 3rd or 4th round picks to find a "project" that could back up while waiting to take over NT from Jamal Williams.

The Argument For Jackson: He has all the tools. Tyson Jackson has shown above average strength, speed and intelligence on the football field in various times during his four-year college career. He's tall, a full two inches taller than both Castillo and Williams, but bends his knees to get low. This, plus his natural-born strength, provide him with the power to bullrush any single lineman. Even in the NFL he will immediately need to be assigned two blockers. Once he refines his technique, he has the potential to become much more dangerous.

Due to his size, he's not quite as quick as most natural 4-3 defensive ends, so it could be presumed that he played his college years out of position. A move to 3-4 DE, plus his experience as a pass-rushing defensive end, gives him similar potential to Luis Castillo without the injury concerns. 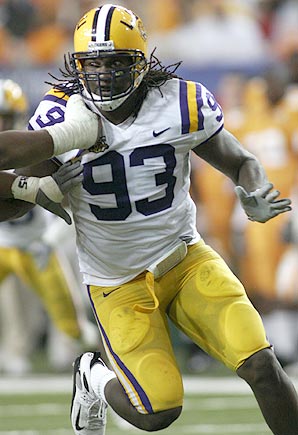 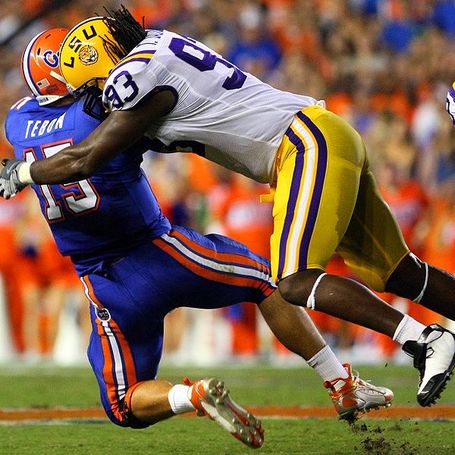 The Argument Against Jackson: His commitment and his motor. Like a lot of talented young football players, Tyson Jackson has shown flashes of greatness. Sometimes they last for entire games, sometimes entire seasons. However, it appears that he does not go 100% on every down and will seemingly disappear for long stretches of time. Some scouts think that he would quit against OTs that were bigger, stronger and faster. Others think he was unhappy with the coaching at times throughout his career at LSU and that was the cause. Everyone seems to agree that when Jackson gives it his all, he's a really tough man to stop, but that may not necessarily be every play or even every game unless he finds the right situation.

Tyson Jackson is a very solid player who you can't help but think probably should have been more productive over the course of his career. It is possible, perhaps even likely, that subpar coaching may have held him back a little bit. As a defensive end, he really only had one pass rushing move, which was to go forward as hard and fast as possible. No swim move. No spin. No inside-out. No outside-in. Just straight ahead, through the tackle and into the QB. It worked at times, but it wasn't particularly effective against good tackles. He's big and strong compared to other DEs, and not particularly quick, which would suggest that he would be a run-stopping 3-4 defensive end.

Tyson Jackson's biggest positive other than his NFL-calibre strength is his intelligence. One play always comes to mind when thinking about Tyson Jackson and that's the time in the 2007 season when Florida lined up in a strange formation. They had a lineman split out wide, but covered up by a split end even further outside. There may even have been a second offensive lineman far off the line. There were a couple of wide receivers out there too, and it was clearly a setup for a screen. Clearly, as in, clear if you really think about it, which obviously the LSU defense did not have time to do. Tyson was not covered up by a tackle on his side because he was on the side with the weird formation. Instead of running to the QB, Tyson just stepped up and got between Tim Tebow and the receivers. With Tyson in the way, Tebow couldn't make the pass and the defensive end on the other side of the line got an uncontested sack. He was always pretty bright at sniffing out short passes to his side of the line, and when he saw it he would sit back rather than rush and more often than not he batted down the pass. He has a high football IQ that way.

His weakness is that he is not a dynamic pass rusher, nor is he particularly quick. He's versatile, in that he could move inside if you need him to, but I don't think there's a Pro Bowl in his future. He could be a very solid player, but I can't really tell you if a solid player is worthy of mid-first-round consideration. In the last couple years, LSU has had trouble getting pressure on the passer, and Tyson was definitely a part of that.

Despite his strengths, he always just seemed to leave you wanting more. He LOOKS like a football player, but you just wish he could make a few more tackles behind the line or sacks.