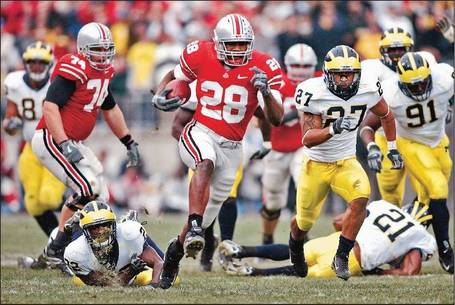 Why We Need An Upgrade: In 2008, the San Diego Chargers rushing attack ranked 20th in NFL in terms of yards per game. As the roster stands today, the only change that has been made is the replacement of Mike Goff with Kynan Forney. Although the focus of this team has been moved from the ground game to the passing game, it's important to be balanced and talented at both so that you can win different games with different stategies.

The reasons for improvement are many, but the most important one is victories. A strong defense will keep you in every game, an explosive passing attack will make your offense dynamic and a powerful running game will help seal off victories (and prevent comebacks). There were at least a handful of games that the Chargers should've won in 2008 that were lost because our offense could not stay on the field. That needs to change if we're going to have any hopes of beating the elite teams in the AFC in the playoffs.

Why We Don't Need An Upgrade: The reason for not upgrading the position is hope. Hope that Marcus McNeil returns to Pro Bowl form and becomes a tractor on the left side of the line again. Hope that Darren Sproles' performance in the playoffs against the Colts is something he can do regularly if he's given more carries. Hope that the right side of the offensive line improves with Goff departing and that the line improves as a whole with 2008's health issues behind them. Hope that LaDainian Tomlinson returns to his Pro Bowl form with an improved, healthier line and less carries. Hope that Jacob Hester can grow as a FB to become a Lorenzo Neal-type blocker.

The Argument For Wells: Chris "Beanie" Wells not only has terrific potential as an NFL running back, the Chargers' current backfield situation would be perfect for him and he would be perfect for it. Although Tomlinson and Sproles are both talented, using their speed, quickness and hands to create opportunities in the open field, the one piece that's missing is a power back. When he was younger and has less miles on him, Tomlinson could handle the full load. After 2,657 carries in eight seasons it's understandable if his body is not as strong as it once was.

Football gameplans get more complicated each season, but the need for the power back to run up the middle and pick up 3 yards consistently will never fade. Right now, the Chargers do not have that and it's going to make LT and Sproles job much easier if we can get one. Chris Wells has the size, speed (4.59 40 at the combine), strength (25 bench press reps) and proven track record. In watching him play over the past few years he most reminds me of former Ohio State Buckeyes RB Eddie George, who had great success in the NFL with the Tennessee Titans. He's a strong back with good speed, great desire and the patience to find the hole before exploding through it. Splitting carries between him and LT would go a long way towards making our run game more dynamic, more balanced and more capable of keeping the lead in the fourth quarter. 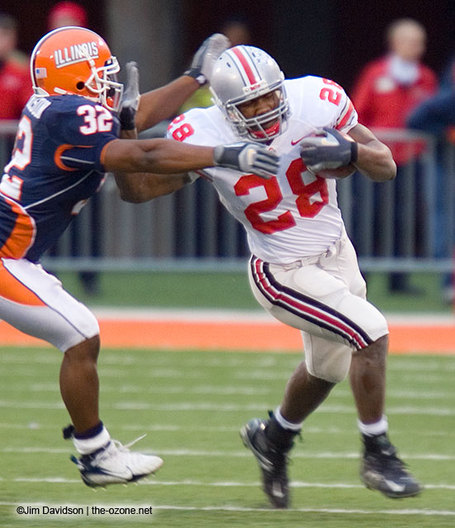 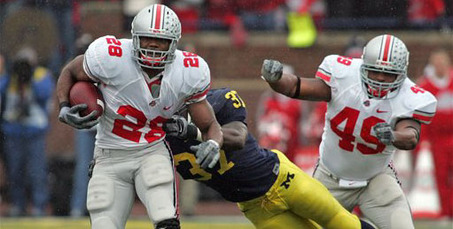 The Argument Against Wells: Chris Wells has been described as "college fast", meaning he can turn the corner at the end of the line and sometimes even break away on a long run in college but NFL scouts suspect he'll struggle to do the same in the NFL. He's not known for being shifty and opts to try and run defenders over rather than making them miss, another characteristic that will not translate as well in the NFL. Wells missed several games during his senior season battling an ankle injury and then suffered a concussion in the Fiesta Bowl, so injuries may be a factor as well. There has also been a good deal of discussion regarding his abilities as a pass-catching running back, since he made only 13 catches during his entire four-year career with Ohio State (8 catches during his injury-shortened senior season).