Why We Need An Upgrade: One of the three major holes on the Chargers defense is right next to Stephen Cooper. The options there without Maualuga are Matt Wilhelm (who was dreadful at everything last year), Tim Dobbins (who played well against the run but is more of a backup) and Kevin Burnett (a free agent signing from Dallas who plays well against the pass but has never proven to be a starter). If the Chargers are looking to build a championship defense last year, they know they're going to need another playmaker at the Inside Linebacker position.

The Inside Linebackers are often overlooked as blitzers in the 3-4, but they're in fact very valuable. With the line either going towards the center to stop Jamal or rotating to the outside to stop our blitzing OLBs, there are plenty of holes in the center for a strong ILB to terrorize the quarterback.

Why We Don't Need An Upgrade: A return-to-form by Merriman fixes everything. An improvement in the outside pass rush will force more bad throws, which could turn into more interceptions with a sure-handed ILB like Burnett. Dobbins could play in run-stopping situations (such as 3rd & inches). Filling the Safety and Defensive End positions may be more important.

The Argument For Maualuga: Baby "Lights Out" or Seau Junior. This is Rey-Rey's potential. Maualuga is big (about 20 pounds heavier than Cushing and Laurinaitis), fast (at USC's Pro Day his 40 time was 4.65, fourth amongst all LBs), quick (4.25 in the short shuttle) and powerful (23 bench press reps). Even with all of those stats, I do not think anyone can truly appreciate what Maualuga brings to the table without first watching him play. He consistently plays through injuries, he's fiery and when he sets his sights on something (like sacking the QB) nobody can stop him. He's got a great motor and is as powerful as a freight train when he gets up to speed. Don't believe me? Ask these guys: 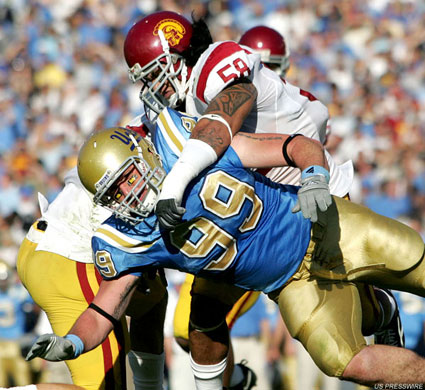 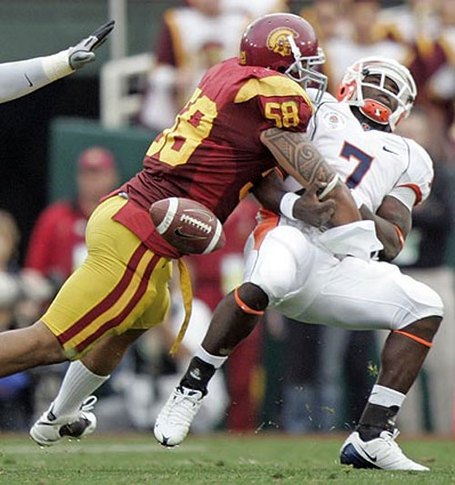 The Argument Against Maualuga: He's not as confident in coverage as he is when stopping the run or rushing the passer. He can be hesistant in his backpedal and reads, sometimes putting himself in a bad position defensively. Rey has shown good hands and an ability to read the QB's eyes, but he needs more work on breaking down offenses quickly. Maualuga's college career was riddled with small injuries that he played through but may have hampered him. He will need to show that he can stay healthy and consistent to become a star in the NFL. The big knock on Rey is that he's immature and unfocused, culminating in him showing up to the Senior Bowl and Draft Combine with very little preperation. Although he certainly has the physical tools to make an immediate impact, it may be necessary for a Chargers vet to take Rey under his wing to ensure that he maintains his focus both on and off the field.