Share All sharing options for: X's and O's - Clinton Hart

Clinton Hart has been on my mind a lot lately.  The Chargers are obviously looking to upgrade at that position, but they are in an odd position.  It appears all of the best Safety candidates are slated to go in the second round this year, where the Chargers do not have a pick.  So what should they do?

There have been discussions here about moving Cason to FS and Weddle over to SS, discussions about drafting a slow CB and transitioning him, talk about just taking the best safety available at either 16 (and take the criticism for reaching) or whoever is left in the third round and so on.  It seems the further we get away from the regular season and the more grim our other options look the more people are saying "If we stick with Clinton Hart we'll be fine.  He was killed by no pass rush."  Well, if you've been following the comments for the past week or so you've seen me arguing against that over and over again.  So I decided instead of going off of what I thought, I should leave it up to the video tape.

Before I did so, I wanted to give Clinton the benefit of the doubt (partly because I see him being in the starting lineup in week 1).  So I went searching for his best game, statistics-wise, so that I could start my analysis there.  What I found was something shocking: I had forgotten how good Clinton Hart was.  This was before I even looked at the video tape.  Have a look:

I had almost forgotten, due to his age (31), that last year was only Hart's second full year as a starting safety.  It's certainly shocking to see him drop from 5 Interceptions in 2007 to zero in 2008, but when we start comparing the rest of the defense those two years, you can see how his numbers might've taken a hit.

Well that's a fairly big dropoff, isn't it?  A lot less turnovers and a good deal less sacks in 2008 when compared to 2007, but we knew that already.  More points scored by the offensive opponent and less points scored by our defense.  The funny thing is, the run defense stayed the same.  If anything, it got better.

So here's where I stand after seeing all of that.  I think Clinton Hart did not regress last season.  I think he stayed the same but the things around him changed.  First, he lost an experience veteran playing FS next to him to provide help in coverage.  Second, he lost a fairly good pass coverage LB in Wilhelm (14 games started in 2007, 7 games started in 2008) and had him replaced by a run-stopping machine who was fairly weak in pass coverage (Dobbins).  Third, and most obviously, he lost a fantastic pass rush which lengthened the amount of time he had to stay in coverage and showed the world his biggest weakness.  That's where I'm starting, now onto the video tape.

Clinton Hart is not going to the Pro Bowl.  It's just not happening.  He's not overly fast or quick.  He's not a bruising tackler and he's certainly not the most talented player on the field.  Clinton Hart is a mediocre football palyer in almost every single way.  Now, I will attempt to show you how being mediocre can result in great numbers one year and horrible ones the next.  You're should see a pattern in the pictures below (as always, these pictures can be a bit blurry so you're going to have to trust me): 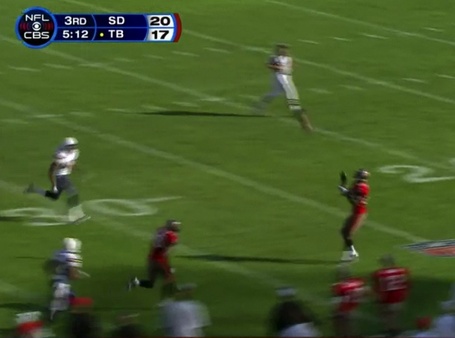 Clinton Hart is the Charger on top of the "30".  He was responsible for any over the top coverage and has obviously provided none.  Antonio Bryant caught that pass backwards, spun around and ran in for a touchdown. 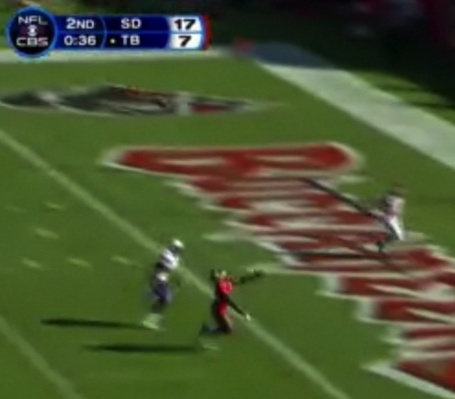 That's Hart right behind Antonio Bryant, again.  Bryant was released by Cromartie (as he should've been) and blew past Hart like he was standing still.  This was a missed opportunity for TB, luckily, because Garcia overthrew Bryant by about a yard. 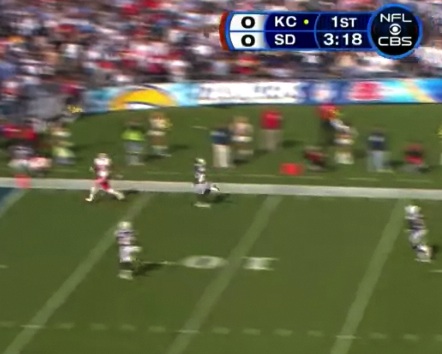 That's Hart running over, again trying to defend a receiver running down the sidelines from the hashmark.  On plays like these the cornerback is taught to play underneath, to prevent any passes to the receivers chest.  The safety is supposed to be playing "over the top", preventing any passes thrown over the receiver's head from being caught.  Jammer is doing his job on this play, Hart is out of position. 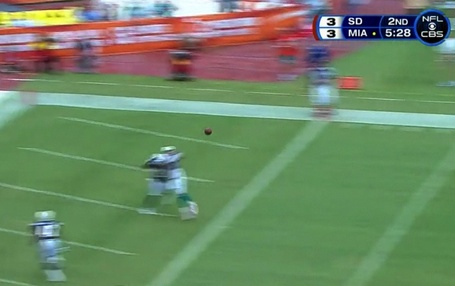 On this play, either Hart is again 3-4 yards away.  This one could go in several different ways.  Perhaps Hart was supposed to be playing over the top and Jammer underneath?  If that's the case, then Jammer played the wrong assignment but it doesn't matter because Hart is so far away from the play.  If Hart was supposed to be playing underneath, then not only is he too far away to be a part of the play but he's also seemingly running to the wrong assignment.

What I found on video backed up what I had thought after looking at the stats.  Clinton Hart is just barely quick enough, fast enough, smart enough and strong enough to play safety.  If you can limit the time he's in coverage to one or two seconds, he'll make plays consistently.  All of these plays happened when the QB was able to buy some time either in the pocket or by running out of it.  All of these plays gave the QB 5 or more seconds to throw the ball and the receiver that same amount of time to get past Hart.

So here's my final conclusion, and it's one that I'll admit to being wrong about previously.  Clinton Hart is good enough to be the starting safety for the San Diego Chargers in the 2009 season IF our pass rush returns to what it was before.  And that's a big if.  I think the Chargers would rather replace him with a younger, more talented safety that takes some of the if out of the equation but I no longer think that doing that is 100% necessary to the Chargers success in the upcoming season.  Be aware though, that if we're giving any QB ample time to throw he's going to be able to attack Clinton Hart deep for touchdowns.