The Denver Broncos Dust Ups and Defense in Free Agency

Share All sharing options for: The Denver Broncos Dust Ups and Defense in Free Agency

The Broncos have been much busier than the Bolts this season, but not all the steps were forward. The prime soap opera involved their lotsa drama quarterback Cutler. Whether they made the first step or simply listened to an offer, there is no doubt they entertained swapping their quarterback for Matt Cassel. Despite offering a better deal, the Broncos ended up on the sticky side of the stick when the Patriots dealt Matt Cassel to the Kansas City Chiefs and news of the potential trade leaked out. With a more confident quarterback it might have ended there, but Jay Cutler uncorked a particularly vinegary bottle of whine. He both asked to be traded and initially refused to meet with team officials to iron things out. Since then things have evened out; ultimately this looks like a tempest in a teapot as both sides have vital interests in doing well next season. The only possible damage would be to Cutler's ego, which does seem somewhat tender.

The second story that has stirred up less controversy was Brandon Marshall's arrest for getting into a fight with his fiance in an incident in which both were arrested. While that might be chalked up as one incident, it is not the first time he has been arrested for laying hands on a woman. For a 6'4" and 230 pounds the flaccid excuses for this behavior strike me as fatuous at best. He may not get the suspension, but there is a problem there and I'm certainly glad he doesn't wear blue and gold. Much like Brian Giles; I just couldn't find myself rooting for him to do anything but get the hell off the team. He may end up getting off lightly again as charges were dropped; but there is an indelible odor about him now. 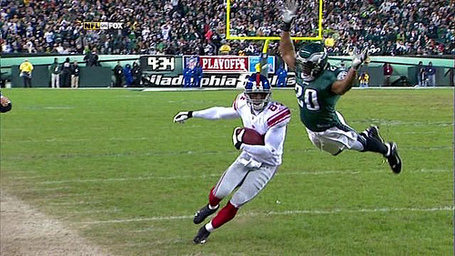 Brian Dawkins in flight via blogs.courierpostonline.com

The Broncos have been very busy in free agency acquiring a number of starters and reserves. One area that appears to be strongly upgrades is Safety. The pick up of Brian Dawkins looks to me to be their best move this off season. A perennial Pro Bowler and huge hitter; he is a bit long in the tooth but still has a lot to offer on the field and as a leader. They also picked up free safety Renaldo Hill who did good work when he was with the Dolphins last year and looked good against the Chargers when the Bolts locked up with them in Miami. They also raided Miami of Andre Goodman who played corner for the 'Phins in all 16 games. Coming back from several shoulder injuries he put together a great campaign with five picks and 16 passes defensed; I see him starting opposite Champ Bailey with Dawkins and Hill at safety; but you never know until the season starts. That looks to be a pretty competent secondary if they can stay healthy; but given the age and history that could be an issue.

The Broncos also added tackle Ronald Fields who was coached in San Francisco by the new Broncos defensive coordinator Mike Nolan. Coming in at 315 pounds, he might be the starting Nose Tackle as the Broncos make the big shift to the 3-4. His stats thus far haven't been stellar, but clearly Nolan saw something he likes. At ILB the Broncos picked up Andra Davis; he had an ankle injury in 2007 but bounced back fairly well in 2008. He looks to be a stabilizing influence in the middle of the field; he wore the radio helmet for Cleveland so is a leader on the field. He appears to be another sound pick up.

In terms of backups they added Matthias Askew who has only played in a handful of games so far for the Bengals at defensive tackle. Darrel Reid played mostly on special teams for the Colts last year, but is also a backup defensive tackle. That will likely continue next season. The additions to the secondary have been the best moves the Broncos made this off season. What would concern me were I a Broncos fan is the lack of action on the front seven thus far. While free agency is not over and the draft is yet to happen; this doesn't appear to be a defense poised for a massive turn around. Tomorrow we will take a look at the pickups for the Broncos on the offensive side of the ball.